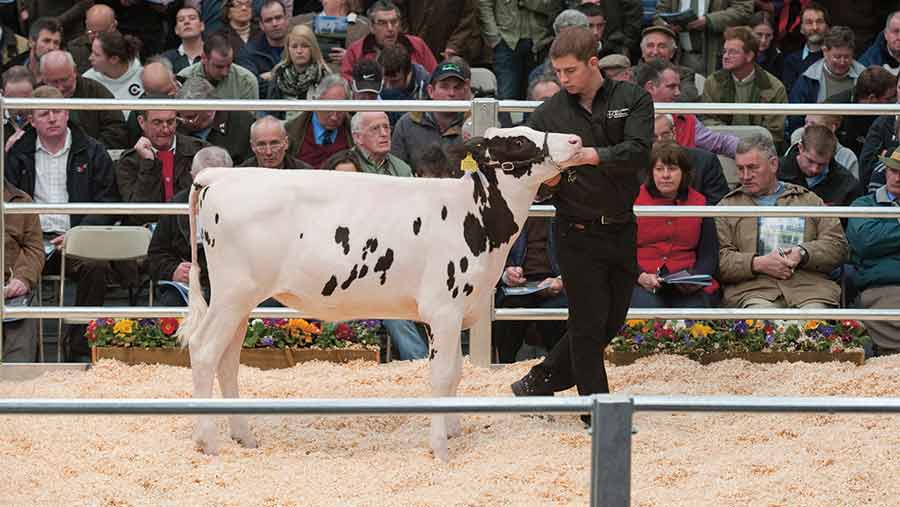 The number of dairy classification scores being carried out in the UK have held strong on last year’s record figures despite the low milk price.

While dairy farmers are admittedly trimming costs, registering and valuing cows is a trend that is being seen UK-wide as an “insurance policy” when TB bites or if the herd is forced to sell up.

During the first six months of this year, Holstein UK has carried out 77,500 classifications across 2,850 farms – mirroring the number completed in the same period last year.

Holstein UK head classifier Meurig James said he is confident that by the end of the year they will have classified close to the 157,000 animals they scored last year.

“There are still a few cancelling, but there are quite a few new ones coming on board which balances it out.

“Milk recording and classification adds value and raises the profile of the herd and if they did have to sell up, those cows would be worth more money.”

Mr James said another trend he has seen this year is farmers reducing cow numbers in an attempt to reduce pressure on the business, with farmers taking the opportunity to keep hold of their better cows.

It costs about £8 to register an animal and a further £6.50 to get it classified, but Mr James said the money is easily recouped.

Auctioneer Gwilym Richards said pedigree cattle were easily making a premium of £200-£300 above commercial cattle in the sale ring.

“You will see more buyers at a pedigree sale because people like to buy the pedigree certificate.”

However, he said one of the main reasons farmers in certain parts of the country were getting animals classified was because it acts as an insurance policy against TB.

“It’s a very good insurance policy now that not many farmers have insurance for TB [premiums are too high], because pedigrees will make more money.

“It is important farmers keep things up to date because of the quick turnaround to remove reactors from farms. Sometimes farmers don’t have time to arrange a special classification visit.”

Mr Richards said classification scores acted as a marker for TB valuers too.

He said if an animal hadn’t been reclassified since she was a heifer and valuers boosted her from GP (good plus) to VG (very good) or Ex (excellent), this was often questioned by auditors.

He added: “I think it is even more important in the future for pedigrees to be supported by a pedigree paper. Milk recording also adds value and it is a false economy for farmers to cut corners.”

Holstein UK will be changing its charges later this year when it will start offering package deals for registration, classification and genomic testing.