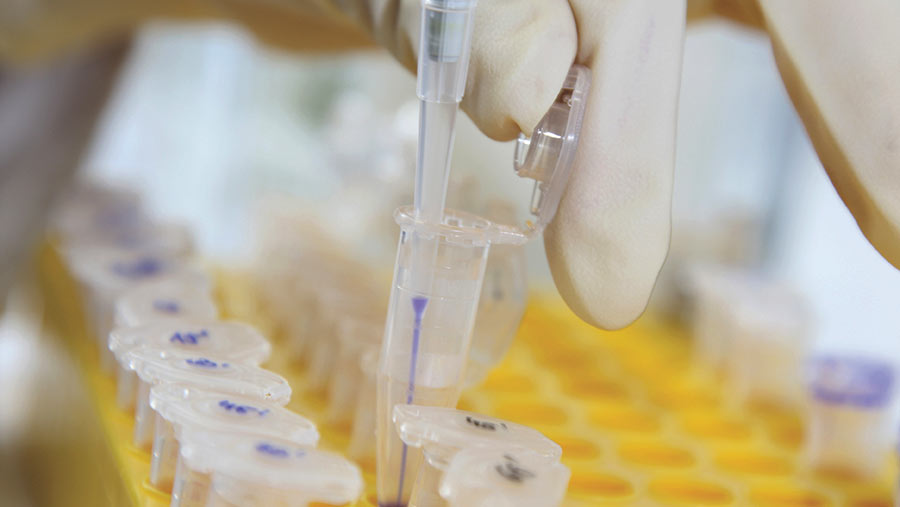 Testing heifers is where real gains can be made. It can also help eliminate poor genetics so these heifers can be put in calf to beef or sold to add value to the dairy business, with only the very best animals retained within the herd.

Geneticist Darren Todd from the National Bovine Data Centre (NBDC) answers some key questions on how testing can be used most effectively.

Q. What is genomic testing and how can it benefit my herd?

A. Genomic testing gives information about the genetic merit of animals for key dairy traits. It is best used for testing young animals to decide whether to keep them as replacement females or as breeding bulls.

Q. Is there anyone it wouldn’t suit? For example, flying herds or those expanding and wishing to keep hold of all of their heifers?

A. There isn’t much point testing females once they have reached milking age. Those herds that keep all their heifers will benefit less, but it can still identify which females to breed with sexed or beef semen.

Q. What tests are currently on the market and which one should I choose?

A. The most common tests available are low density (LD), which will give a full suite of UK genetic trait information, including GPLI (genomic profitable lifetime index) and UK Type Merit – everything you would see quoted for an AI bull in a catalogue.

Q. How do you decide whether to take the whole-herd approach to testing or pre-selection and how much money can the latter save?

A. Ideally, test all the heifers which you would consider keeping as replacements.

You could narrow down this group by pre-selecting on parent average, but this runs the risk of missing heifers which have a much better genetic merit than their parent average predicts. So savings on tests may be a false economy.

Q. If you decide to do pre-selection, what tools can you use?

A. There is no point in testing females with obvious physical defects or serious health issues. No matter what their genetic merit, they still need to become functional milking cows.

Parent average is an increasingly poor predictor of genetic merit, because of all the young AI bulls now used, so it is of limited use in pre-selection.

Q. At what age should heifers be tested? And how long does it take to get the results back?

A. Ideally test as young as possible, but certainly before service age. Results take 6-8 weeks from hair or tissue samples being received from the farmer.

Q. I’ve heard of farmers waiting until weaning before they send off the result. That way, if the calf dies they don’t incur the costs of the test. Is this a good thing to do? How can you ensure the sample stays effective?

A. Hair or tissue samples (if properly contained) can be stored at room temperature for up to a year. Testing at weaning should still give plenty of time for test results to come back before breeding. The main thing is to avoid any cross contamination, so keep hair samples in individual plastic bags.

Q. What criteria should farmers use to select replacements, or is this largely farm-dependent and reliant on what type of milk contract they are on?

A. PLI is a good all-round index to start with – it will select for moderate-sized animals with good health traits and improved kilos of fat and protein.

Some farmers may then wish to focus further on component percentages or milk (kg), according to their milk contact.

Also keep an eye on teat conformation (placement and length) as this is an area seeing increasing focus, particularly among farmers using robots.

Q. If results show heifers are poor, should farmers sell them and cut their losses before they incur further rearing costs, or is it still beneficial to wait and sell them once they are older?

A. It is probably best to keep a few surplus to calving age and then make the final decision once they start milking.

However, there is little point economically in keeping a large proportion of heifers that won’t be needed as replacements – so it is best to sell them.

Q. How can I improve my breeding programme to really make the most of genomic testing?

A. Only test young animals, mate them to the best bulls available (according to your criteria) and consider classification once they are milking for further information and advice about them.

Q. Is it worth considering IVF? Which herds would gain the most benefit from this?

A. This is quite costly so only very high genetic merit animals should be considered for this procedure. The top ranking (<£700) on PLI or Type Merit (<3.00) could consider it.

Q. Is there a way to compare UK results with US and Canadian ones?

A. The simple answer is no. US and Canadian results tell us about how the animals would perform in those countries and not the UK.

Only those wishing to market animals internationally should consider testing for US or Canadian indices.

Q. Can I save money by not testing mature/proven cows and their progeny to begin with?

A. There is little point in testing older cows, however their progeny should be considered for testing if they are among the group of potential replacement heifer calves.

Q. How reliable is it?
A. For young Holsteins, genomic testing typically provides between 50 and 70% reliability, depending on the trait. This means that it tells us about 50 to 70% of the information about the genetic merit of young animals.

Q. What if a calf from the best cow in a herd has really poor figures? Should you still not keep it?

Q. Do you ever need to retest?

A. A small percentage of samples do not provide usable DNA at the lab, so they will need retesting. Depending on the company you test with, this may incur extra cost.