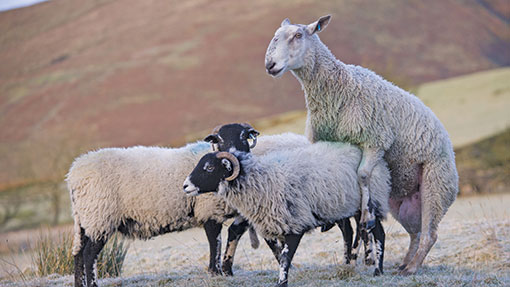 According to independent sheep consultant Catherine Nakielny, a higher ewe-to-ram ratio can be achieved if farmers buy a ram that is fit for purpose and this could help save up to 16p/kg on their lamb production, estimations show.

She adds: “There is plenty of evidence that performance recorded rams can generate higher returns through both the slaughter lamb generation and the retention of females whose subsequent performance is improved.”

See also: Zwartbles crosses could be an alternative to Mules

Dr Nakielny highlights that using recorded rams could result in a conservative increase in income of £3.50 a lamb, which equates to an additional 8p/kg if lambs weigh 42kg.

“But, using rams that are able to successfully get the optimum number of ewes in lamb and survive for three or more seasons will also reduce production costs and increase output,” she adds.

Guide to conducting a ram MoT

If you compare the performance of two rams, both costing £600 but one lasting two seasons and another lasting four, there is a significant saving to be made, says Dr Nakielny (see table two, right).

Providing rams are fit, fertile and healthy, they should easily serve 80 ewes in a breeding season, she says.

“Many of the producers I work with are using one ram a 100 ewes and for anyone who doubts what a ram is capable of just think about how many ewes an unwanted ram or ram lamb can serve in a short period of time,” she explains.

But, she stresses making sure rams are capable of serving more ewes requires planning, and farmers need to buy the right ram to start.

She says ram buyers should look to buy a performance-recorded animal that has been bred and managed on a predominantly forage-based diet.

“There is nothing wrong with feeding a small amount of concentrates to a ram prior to sale, but excessive and long-term feeding is damaging.

Choosing a ram flock from which you source genetics is equally important as choosing the individual ram. “Identify a flock which is selecting on the basis of performance records, breeding for the needs of the commercial market and using a forage-based system to produce its rams,” advises Dr Nakielny.