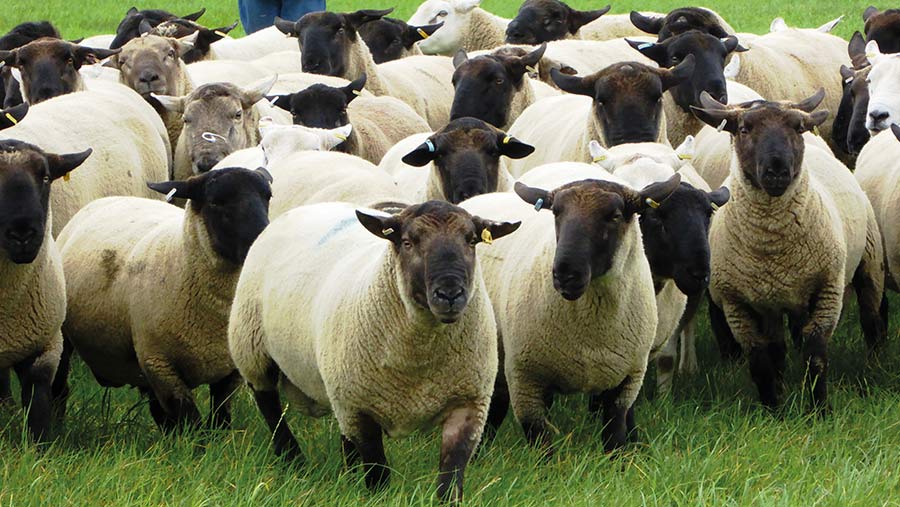 Shropshire sheep breeders the Hulme family have slashed costs and increased ram sales since switching from breeding sheep for the showring to focusing on genetics that thrive off forage.

Robyn and Philippa Hulme, along with their sons, Nick and James, previously ran the Crosemanor flock of 130 pedigree Suffolk ewes at Pikesend Farm, near Ellesmere in Shropshire.

This was dispersed in 2006 and replaced by Suffolks imported from New Zealand (NZ). Since then, the flock has grown to more than 1,000 ewes of pure NZ origin.

At the same time, annual ram sales have increased from 60 to 600 while bought-in concentrate has been slashed from 40 tonnes annually to hardly anything.

Despite numbers increasing, flock management is easier than ever with Nick and his wife, Menna, now lambing 1,000 ewes and 300 ewe lambs outdoors single-handedly.

With brother James also involved, this is the same number of staff previously required to lamb 130 traditional Suffolks indoors.

“This is only possible because of careful selection for lambing ease and lamb survival,” says Nick. 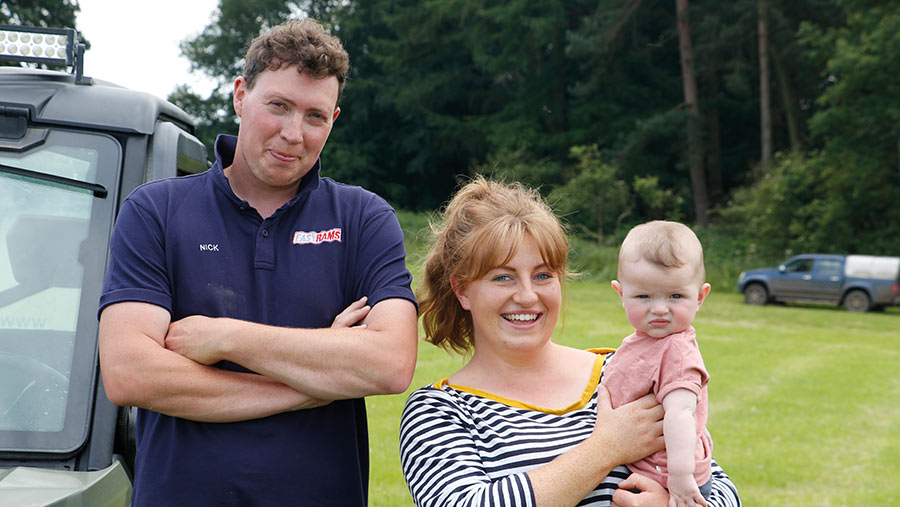 The family imported their first NZ genetics in 2006 after Robyn attended a sheep breeding conference in Ireland.

The former Suffolk Sheep Society chairman says he was “intrigued” by a talk given by a Kiwi ram breeder, Murray Rohloff, about making money out of sheep without subsidy.

“He was talking about how their only aim in life was to supply their clients with rams that would improve their bottom line. Everything he said you shouldn’t be doing we were doing with brass knobs on – foot-trimming, dagging and feeding concentrates,” admits Robyn.

It was fortuitous timing and gave him the push to rethink his system.

They started off importing NZ Suffolk embryos and have since bought in NZ Texel rams and ewes. These two breeds have been crossed to create Sufftexes.

The most recent addition has been a maternal composite breed, coined Easydam by the Hulmes.

This combines the hardiness and lambing ease of the Romney with the milkiness and prolificacy of the East Friesian, and the carcass quality and improved survivability of the NZ Texel.

They were attracted to the Easydam after being impressed at their dominant maternal ranking on Sheep Improvement Limited (SIL) – NZ’s performance recording and genetic evaluation database.

SIL combines many traits into single maternal and terminal indexes which allows comparison between all breeds, unlike Signet, its UK counterpart. The Hulmes record the flock using both SIL and Signet.

To prevent inbreeding, new genetics comprising six to seven rams within the top 5% of their respective breeds are sourced from NZ every two to three years.

This has saved the family weeks trawling through parentage records. Stock tups are then colour-coded with their corresponding group of matching ewes ahead of mating.

Lambs are tagged and performance-recorded from birth with birthweight, eight-week, weaning and scanning weights, alongside lambing ease, mothering ability, and lamb vigour. 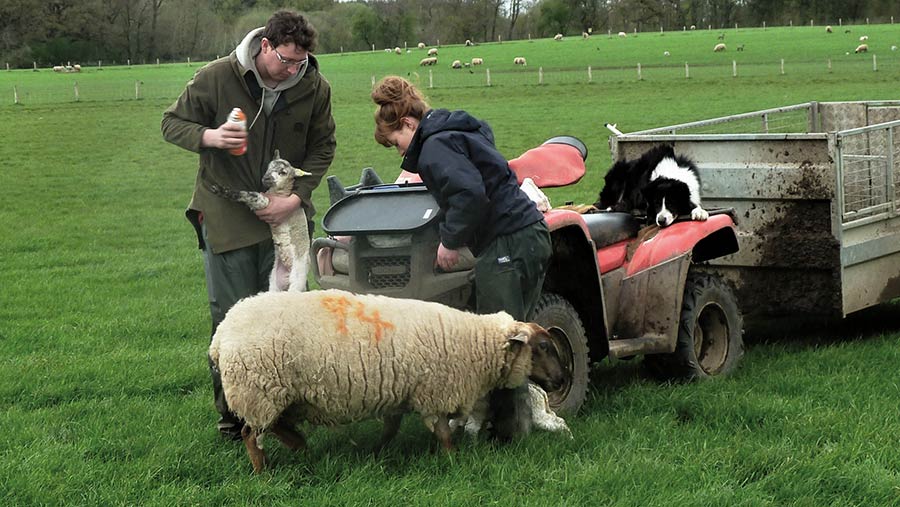 At 16 weeks, all lambs are ultrasound scanned to measure backfat and eye muscle area to assess carcass quality.

The best 25-30 ram lambs destined to be used as potential stock rams will then be taken to Scotland’s Rural College in Edinburgh to have a CT scan to give a more detailed and accurate assessment of meat yield.

The family place a strong focus on good maternal traits as the mainstay of their customer base uses their rams to breed replacements. A zero-tolerance policy is taken towards lameness, mastitis, poor udders and mismothering.

“Menna is pretty trigger-happy with the red tags,” says Nick.

Furthermore, no foot-trimming takes place. “When we had UK Suffolks, all the ewes were trimmed three times a year – 140 sheep amounted to over 1,600 feet,” recalls Robyn.

Yearling ewes make up one-third of the flock. Having this large pool of younger genetics is allowing them to make tougher selection decisions as well as making faster genetic progress. The sheep in the top 10% of the breed three years ago are now below average.

Another key focus is ensuring the sheep can thrive in low-input systems.

Ewes are strip-grazed on fodder beet throughout the winter. They are then set-stocked at 12/ha (5/acre) 10 days before lambing, which starts from 25 March for one month. 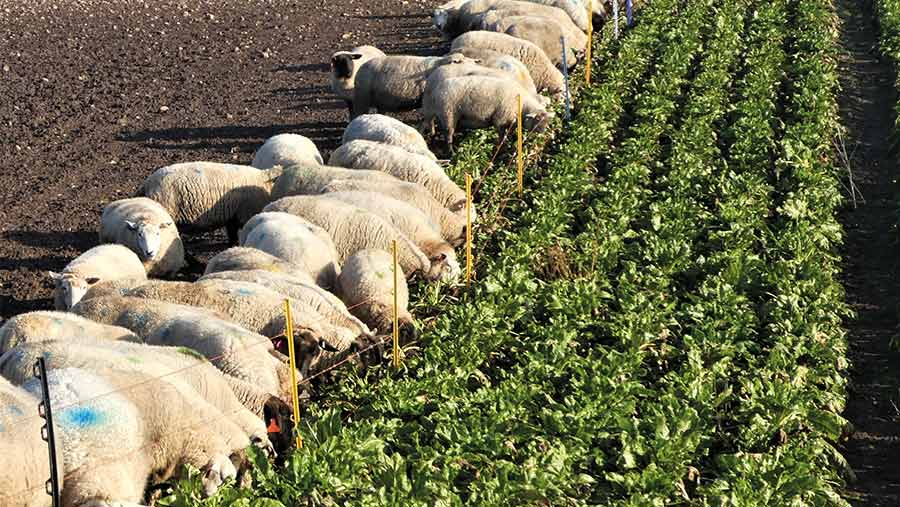 Growing fodder beet and stubble turnips on neighbouring farms allows grass paddocks to be rested from the new year to build up sufficient covers ready for lambing, says Nick.

Only triplets receive concentrate ahead of lambing if grass is in short supply, with the remainder 100% forage-fed.

About five years ago, the Hulmes started growing herbal leys with clover, chicory, plantain and cocksfoot. The deeper rooting cocksfoot has been particularly beneficial throughout the summer when the farm tends to dry out, says Nick. 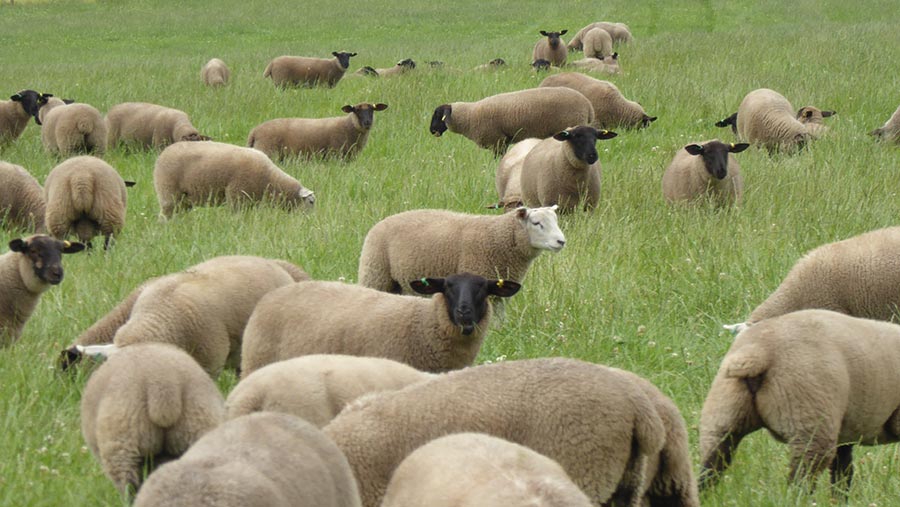 A reduction in the number of flights from NZ to the UK means importation costs have risen 50% since 2018.

Only 10% of the rams in NZ are scrapie-resistant – a pre-condition for imports to the UK and Europe – so this makes selection difficult.

Despite this, it is business as usual at the farm with last year’s lockdown creating record demand and bringing in 140 new customers.

Most of them have come through word of mouth, but the family also have a stand at National Sheep Association events, and advertise through the farming press and social media.

The Hulmes believe a key selling point is offering their customers a “two-services season guarantee”. This means that if the ram dies or has a structural defect before completing two seasons’ work, it is replaced free of charge.

In the future, they are confident there will be rising demand for their low-input, forage-fed rams as the sheep industry seeks to minimise costs in the face of new challenges.