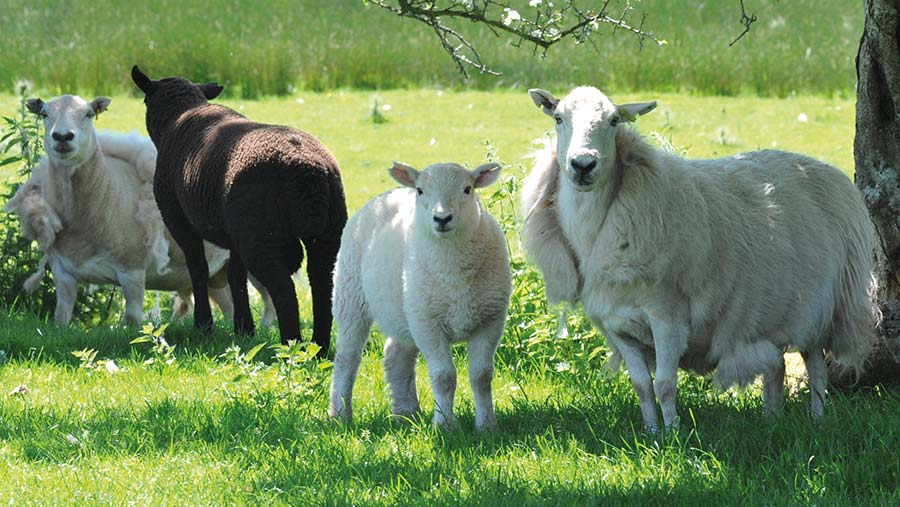 Managing invasive bracken on the Black Mountains has increased the usable grazing area by 320ha (790 acres).

A programme of twice-yearly control treatments, applied over a three-year period up to 2020, is one of the initiatives funded by a £1.1m government grant awarded to the Black Mountains Land Use Partnership (BMLUP), a group of graziers, landowners and regulatory bodies.

Their Sustainable Management Scheme (SMS) project also met the cost of restoring peatland and managing walkers across the group of hills stretching some 24,600ha (61,000 acres) across parts of Powys and Monmouthshire in south-east Wales and extending across the border into Herefordshire.

Bracken control has increased the quality of feed for graziers like the Gwillim family.

Their hefted flock of 1,000 Welsh cross Cheviot ewes now has access to an additional 60ha (148 acres) of land on and around Y Das that was once covered in bracken.

This is reflected in better ewe and lamb performance and improved plant diversity. 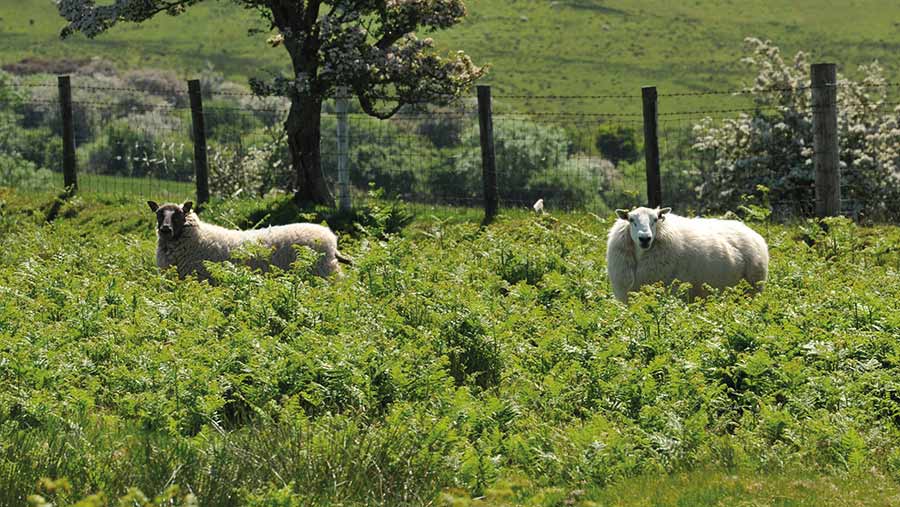 The Gwillim family remove lambs from the hill in September to fatten on the lower ground before selling them from November.

But in 2020, a proportion could have been sold in September, says fifth-generation farmer Jeff Gwillim, who farms with his daughter, Katie, and partner, Janet Holt, at Blaennau Uchaf, near Talgarth, Powys.

They instead opted to retain these lambs to grow on further, achieving finishing weights of 36kg in November – 2-4kg heavier than lambs sold at that point in previous years.

Mr Gwillim says the flock is clearly showing a preference to graze areas where bracken has been cleared.

“We have better quality grazing and there is more grass and forage. There is a real value to that,” he adds.

The hill ewes were at body condition score (BCS) 3, on average, when they were gathered for lambing – an improvement of at least 0.5. Meanwhile, the average scanning rate of 102% was at its highest level since 2018.

Not only has grazing improved because of the bracken controls, but also access to and from the hills.

“When you are moving 1,000-plus sheep three or four times a year and you haven’t got a wall of bracken in front of you, the benefit of that is not to be sniffed at,” says Mr Gwillim.

Peat soils had been eroded by walkers veering off paths that had not been maintained – in some areas path widths had spread to 50m, robbing the livestock of grazing and causing soil and peat to pollute watercourses.

The SMS funding met the cost of reinstating 3km of paths and bridleways, including the well-trodden Offa’s Dyke. 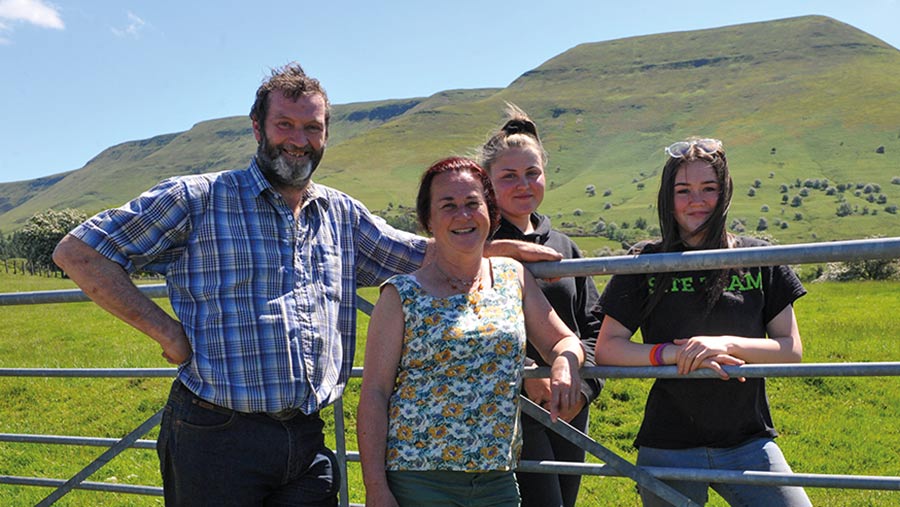 There are fewer active graziers on the hills since the foot-and-mouth outbreak in 2001 led to the culling of 12,000 sheep from the hefted flocks. Pressure on the returns from hill lamb production is also a factor.

“When a hill lamb is only worth £50, graziers don’t see the value in that system,” Mr Gwillim admits.

But the SMS work has improved the value of hill grazing and there is a financial benefit to that, he adds.

Neither the graziers nor landowners received any direct payments – the benefit to them came from programmes to improve the land, interaction with visitors, and investment in skills development.

When the project was first presented to graziers, Mr Gwillim admits there was some resistance.

“Perhaps there are too many farmers who are guilty of only seeing the two square yards of grass in front of them, but as farmers, we have to look at the bigger picture – how something that benefits the environment and ecosystems can benefit farming, too,” says Mr Gwillim, whose late father, Gwyn, was chairman of the Black Mountains Graziers for 20 years.

The grant also paid the salaries of two rangers to help manage visitors on the hills and to encourage responsible behaviour to minimise impacts on farming operations.

Although issues remain – such as gates left open, fly-tipping and dogs not under control – the rangers helped establish a valuable link between the farmers and the public, says Ms Holt. 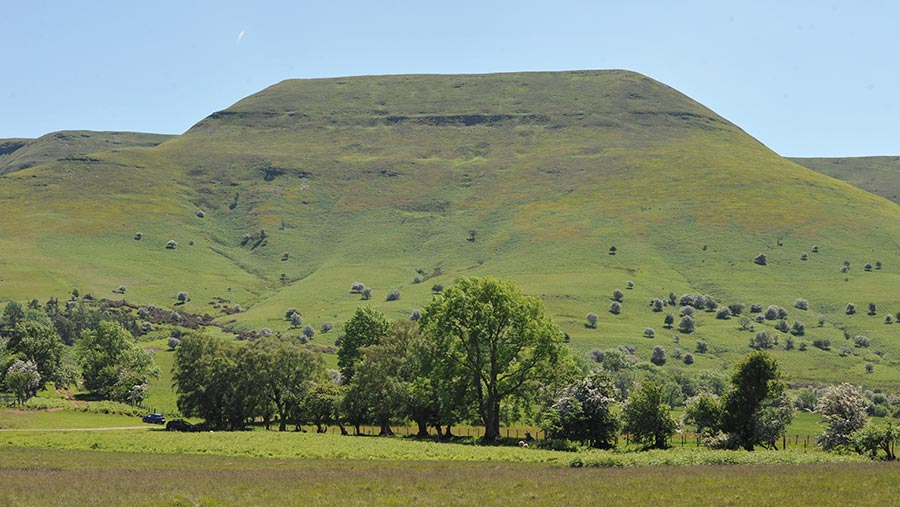 The issue now is in maintaining the benefits that have resulted from the three-year programme since the funding stopped at the end of 2020. Without further support, the benefits of the work are likely to be lost within five years.

A key outcome being considered is to establish a Charitable Incorporated Organisation (CIO) to support the BMLUP and allow it to apply to different funding streams.

Ms Holt believes other graziers would greatly benefit from being involved.

“The partnership will continue to progress, and the graziers and farmers have a lot to gain from having a proactive seat at the table,” she says.

Graziers, landowners, volunteers, and organisations including the National Sheep Association (NSA) provided more than 10,000 hours of unpaid labour to the project.

He believes that the Sustainable Management Scheme has shown that the objectives of tackling climate change, nature recovery and the wellbeing and prosperity of farming and rural communities can be brought together.

“My one sadness is that funding disruptions and a lack of policy stability have meant we have been unable to hold on to everything we have created and now we will need to step back before we can move forward again.

“But step forward we will. If the people of the Black Mountains want it to happen then they have shown that it can.’’

In the meantime, Mr Stocker considers that establishing the Charitable Incorporated Organisation is essential to enable the partnership to access and manage further financial support.

“This will help ensure that the benefits achieved are not lost and allow us to progress to even greater things,’’ he says.