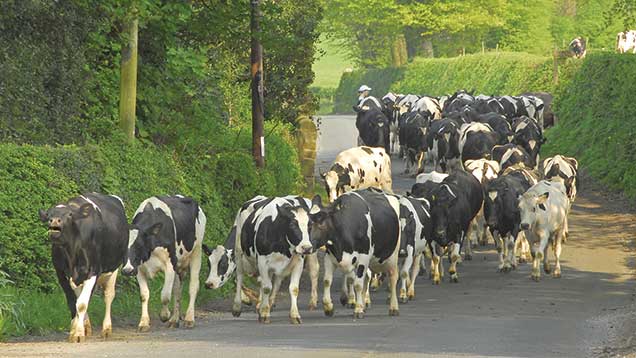 A leading dairy consultant is warning farmers to put the brakes on switching to spring production to prevent milk price pressure.

Kite Consulting’s John Allen is worried an increasing number of dairy farmers are switching to spring calving to lower costs of production.

But he warns this will put increasing pressure on seasonality schedules and A/B arrangements.

“With low and volatile prices, many businesses will be tempted to go for the lowest cost-of-production model – milk from grass. The upshot will be that even more milk will be produced in the spring, and at the same time as the peak in Irish production. The implications for the industry are obvious, and we need to question whether the direction of travel we are taking is the right one.”

See also: How two producers have switched to block calving

Last November, the National Farm Research Unit, which interviews about 3,000 dairy farmers a year, tentatively reported it too had detected early signs that the trend for year-round calving may have peaked and dairy farmers were moving back to block-calving in spring and autumn.

“Some of this is likely to be because of a larger national herd and more imports in the first half of 2014, but we think this effect is minimal,” explains Mr Allen.

Although Mr Allen says it is too soon to state categorically whether this is from a shift to spring calving, Kite suspects it is.

He added: “What we do know is there is more milk being produced in the spring. This year we peaked at 49.15m litres on 26 April, and the trend line from 2009 is obvious.

“To put that amount of milk in context, we are producing 3m-3.5m litres/day more than we used to. Unlike previous years, the persistency of milk volumes has also been very high – up until the end of May not a single day’s production was less than 97% of the peak day. In previous comparable years when the peak has been early, we were down to 94-95% of the peak day by the end of May.”

“Thus we have a lot of milk to find a home for, and it comes at a time when our nearest neighbour, Ireland, also has a lot.”

This year, Ireland’s milk volume for April was up 14% alone.

“A lot of theirs and our milk has gone into cheese, and the figures are staggering. Although we won’t know the Irish cheesemaking figures for another year, the Provision Trade Federation estimates they could be 9% up on last year’s already high figures.

“This will undoubtedly overhang the market for a number of months, and the cheese will undoubtedly have to be discounted heavily in retailers in order to keep it moving through the system,” predicts Mr Allen.

“Some ardent spring calvers think growing spring milk volumes are the processors’ problem, and not theirs. They believe they have the right to choose when to produce milk, and it is up to the processors to deal with it.

“They are right of course. But it is also up to the processors to decide how much to pay for it.

“Processors will certainly be reluctant to invest in additional capacity for a spring flush that lasts just three to four months and will not want to have their new factory running below capacity in the trough.”

Mr Allen says this will put increasing pressure on pricing.

He adds: “This has already started, either through standard seasonality schemes or via A and B pricing.”

In fact, he says, when you do the maths, it might make economic sense to keep a level supply, depending on your processor.

“Arla and Muller Wiseman have tweaked their contracts this year, and initial calculations for Arla indicate that a 1m litre level supply producer, with a milk price through the year of 25p/litre, could earn about £17,000 more through the year than a very extreme seasonal producer.”

Meanwhile, Mr Allen says Muller producers on a level supply will see their milk income unchanged, while those who spring calve could see an average cut of 2-3p/litre for the year. Autumn calvers will see an increase of 0.5p to 1p/litre.

He added: “These premiums will keep growing. If farmers continue to produce more and more milk in the spring, the processors will tighten-up their seasonality and forecasting schedules even more as they look to manage their balancing risk.

“We have already experienced a season of prices dropping to about 15-16p/litre with some contracts, partly as a result of the flush. We could well be looking at differentials between peak and trough increasing to well over 10p/litre, so we all need to be careful.

“There are alternative systems such as autumn block-calving that can produce winter milk and use spring grass. We can foresee a move to these in coming years as a compromise.”