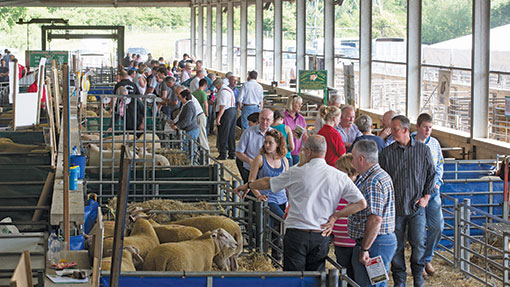 With flocks already taking ram orders ahead of the upcoming tup sales, performance figures are a good way of evaluating top genetics. Jeremy Hunt looks at how to use them when selecting rams.

Commercial sheep producers could be putting an extra 6kg of weight on their finished lambs compared with weight gains achieved 20 years ago, simply by using performance-recorded rams.

This is according to Shropshire-based Charollais breeder Robert Gregory, who has been performance recording his rams for 30 years.

While beef farmers are now recognising the benefits of incorporating performance figures into sire selection, commercial sheep producers are taking longer to realise their value – and it’s proving to be a costly delay.

In 1999, the 21-week estimated breeding value (EBV) scan weight of rams in the Edstaston flock was 1.83 – which means if you had used one of these rams in 1999 you would get an extra 1.83kg of weight compared with a ram with an average of zero. The current scan weight is 7.02 – so in 15 years there has been an improvement of more than 6kg.

Ewes start lambing during the first week in December, with the 75-head flock being housed about two weeks before lambing. They remain inside until they start daytime grazing in February.

Lambs are weaned at 12 weeks old and carry on with the same routine of being out during the day and in at night until weather and grass growth improves.

Ewes are fed haylage and an 18% concentrate. Lambs are creep fed from about two or three weeks old – ad lib to start with and capping at 1.6kg – usually by April. Ewes are AI’d with frozen and fresh semen. Robert Gregory’s aim is for 80-85% conception to first service and the lambing percentage (lambs reared) is 175%.

“We run the flock very commercially and don’t overfeed the ewes. They get up to 2lb a head at lambing, which continues for six weeks,” says Mr Gregory.

The first performance-recording weighing of lambs is undertaken at eight weeks.

Creep feeders are replaced by twice-a-day trough feeding when the 1.6kg-a-day ceiling is reached. A micronised 18% feed is used, but is switched to a 16% protein ration when the grass comes in April, he explains.

A month before the breed’s main sale in July, the ram lambs are moved on to an alfalfa-based 17% protein coarse mix and stay on the 1.6kg rate.

After weaning, Mr Gregory separates the ram lambs and ewe lambs. Ram lambs are weighed and scanned at 21 weeks old and the best half dozen – based on their figures – are taken to Nottingham for computerised tomography (CT) scanning, which shows a complete carcass breakdown – bone, fat and muscle.

“For commercial sheep producers wanting to use performance figures as part of their ram buying decisions this season, it’s the 21-week EBV scan weight that is the critical figure.”

“But most commercial ram buyers are looking for an improvement in growth rate so the relevant figure for them is the 21-week EBV scan weight. The index is important, but far too many people look at that final figure and don’t fully understand what other performance recordings have contributed to achieving it,” says Mr Gregory.

Perhaps his best example of judging the success of using rams with good performance figures came to light after a repeat buyer had been selecting rams every year based purely on a visual assessment.

“This buyer took no notice of the actual figures, but said he always chose rams that appeared ‘growthy’. After several years he admitted he was drawing his first slaughter lambs at least two weeks earlier than usual.

“We were able to show him the figures of the rams he’d been buying to prove the point that it was the superior performance figures of the rams that were responsible for the faster growth rates in the lambs they had sired. Inadvertently, he was benefiting from the higher EBVs.”

Mr Gregory says once commercial buyers start to get to grips with a broader understanding of how performance-recorded rams can benefit the profitability of the lambs they produce, they begin to look more closely at other elements, such as the EBV for fat.

“Breeders do need to closely monitor the EBV for fat. While we have to maintain leanness we must also remain aware that a preoccupation with leanness can adversely impact growth,” he says.

“We all have to keep a close eye on each EBV to make sure it’s contributing positively to the overall index.”

While the younger generation of buyers is becoming more driven by the benefits of using rams with performance figures, Mr Gregory still feels many commercial sheep producers simply don’t understand them.

But despite his commitment to recording, he remains true to his original beliefs. “When I started I wanted to produce rams that I liked the look of but also had good figures. And that has never changed.

“On paper, some may look as though they could do a great job, but they have to please me visually as well and I think ram buyers moving into using rams with figures should use the same principles when selecting sires.”

Mr Gregory reckons a first-time user of performance-recorded rams should not go for sires with a very high index.

“Not everyone will agree with that, but these rams can be rather extreme in one of the EBV traits and the commercial buyer is better suited with rams carrying a good average EBV for all traits.”

Ensuring the optimum genetics are purchased for the flock can be helped by looking on the internet.

An investment in a performance-recorded ram with high estimated breeding values (EBVs) is shown to be worth an extra £800-1,000 over his working lifetime, which proves extra genetic information is invaluable.

Information about breeding potential (EBVs/indexes) is now often displayed at sales on sale cards, breeding charts and in catalogues. However, more information can be downloaded for most Signet recorded flocks from the www.signetfbc.co.uk, using the “EBV search” facility.

The search enables potential purchasers to identify how many lambs a flock has produced that meet their breeding requirements. Breeding charts for rams of interest can then be generated and printed. They provide a graphical illustration of the relative superiority or inferiority of a ram’s genetic merit compared with the breed average.