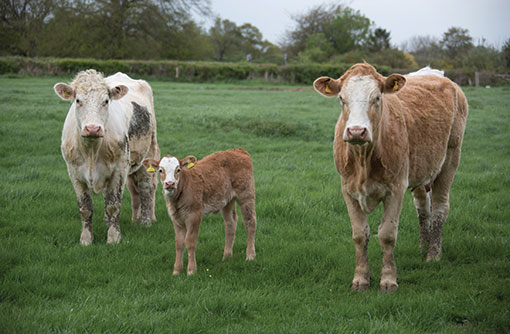 A high percentage of barren cows in a suckler herd can indicate a major problem. Vet Jon Mouncey from the Sevenoaks practice looks at the different causes.

We did not see many cows come bulling again, but those that did turned out to be in-calf. We had the same problem last year, but put it down to Schmallenberg (SBV) as we had one deformed calf.

Although we didn’t test for SBV, we assumed cows would have immunity this year. What do you think the problem could be?

A: Managing and maximising reproductive efficiency in your herd is one of the easiest ways to increase your beef enterprise margin. In this instance you are right to be concerned. Less than 5% barren rate is an achievable target to aim for.

I have outlined some suggestions to investigate with your vet for your situation.

Initially, I would look at the age of the barren cows, when they calved in the previous calving period and whether they suffered a bad calving previously – if they are mainly older, review your culling policy, if younger animals, for example, second/third calvers, review heifer and young cow management with your vet.

Next look at the predicted calving spread. Targets to aim for are 65% conceiving in the first cycle, 25% in the second, 7% in the third and 3% in the fourth.

This is often an effective way of determining if things went wrong at a particular point in time or within a certain group. Useful for comparing year on year performance and making proactive management decisions.

Were both your bulls fertility-tested prior to the breeding season? Up to 25% of bulls presented for routine fertility testing are found to be sub-fertile – they are not completely infertile and so will get some cows in-calf but in a very inefficient way.

Bulls should be checked to be physically sound and semen tested six-to-eight weeks prior to the breeding season. If your bull goes lame or is ill, it could take up to six weeks for him to regain normal sperm function.

Screen for infectious diseases. Last year SBV hit some herds and flocks hard. Recent studies suggest if SBV was encountered not all animals may have been exposed and become immune, in some cases only 50%.

Also don’t forget bovine viral diarrhoea, infectious bovine rhinotracheitis, leptospirosis and neospora. If you don’t know your herd’s disease status screen it herd. In my mind, all herds should know their status for these endemic diseases – which you can do something about.

Consider the body condition and nutrition of the herd at weaning, calving, turnout and mating. Lastly consider trace elements and minerals but not at the expense of all those listed beforehand. Engage your vet or nutritionist to help you review this.

Work with your vet to develop a working preventative herd health review and benchmarking process – not a document that sits on the shelf.

Disclaimer: Any advice given is based on the information provided and cannot necessarily apply to situations where other factors exist. If the advice required relates to a specific animal or disease problem the reader should to contact their own vet or advisor with appropriate knowledge of the particular circumstances.