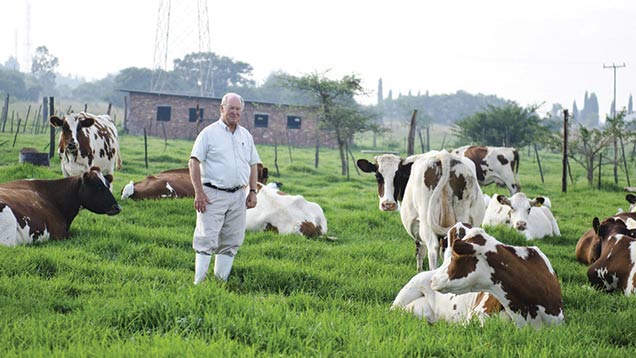 The good rains of December were followed by even better rains as January began. In fact the rains were so good that the Kikuyu pastures were standing more than a knee high. It was a treat to see the cows enjoying the luscious grass.

Unfortunately it wasn’t all good news. We’ve had problems with flocculation (particle clumping) and the milk having a high pH content. After eliminating every possible reason that could be connected to the milking system, we came to the conclusion it must be the feed.

Apparently rations with very high lucerne content may cause milk to have a high pH level. We concluded that a ration with a very high Kikuyu content will have the same effect. A more balanced diet should solve the problem. We did this by essentially adding more bran to the ration and the problem appears to have been solved.

However, this seems to be an annual problem when cows overeat on the Kikuyu at the onset of a new growth season.

In October last year, Clover, the biggest dairy processor and brand in South Africa, announced its intention to take over Nkunzi-Milkyway, my processor.  I estimate Clover’s market share to be about 48% and that of Nkunzi to be about 3%.

It may be small, but it is at the upper end of the market and one of the processors providing Ayrshire dairy products to Woolworths, which in South Africa is the high-quality retail group. It introduced the well-established and sought after Ayrshire line of dairy products. The result is that farmers like myself who provide Ayrshire milk get about a 5% premium.

Clover was originally started by dairy farmers as a co-operative. It has, however, evolved into a multi-billion rand company with shares traded on the Johannesburg stock exchange. A fraction of these shares are in farmers’ hands at this stage.

Nkunzi, similarly, was started by a dairy farmer, but most dairy farmers have no interest in it any more. I, nevertheless, regard Nkunzi as a model processor. It has the interests of its primary producers at heart, it has never dropped its milk producer price and even provides farmers with finances to buy cows.

It is an unenviable position to be in. I will be seen to be giving evidence against my own processor and to be using its own perceived excellence against the merger.