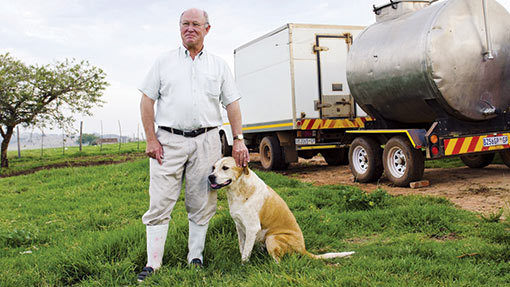 With South Africa being a semi-arid country, farmers should in my opinion not easily complain about too much rain. But as I write we have had seven days of heavy rain, with a forecast of a further five days of rain. The north-east of the country suffered flood damage and also loss of life as a result of the rain.

I refuse to complain, but I must confess that I now have much more sympathy for the UK farmers who suffered severe flooding only weeks ago.

Fortunately, almost all my farmland lies on a gentle slope, which encourages the runoff of water. As a result, there are few real muddy patches and foot rot is normally not a great problem. But with the rain over such an extended period, it has all the potential of becoming a problem and I have to attend to it on a daily basis.

So far the only problems we have experienced are roads that had to be repaired and I had to pull the truck with the milk trailer out with a tractor on a number of occasions. For the rest, the rain will only help to ensure that the pastures are in excellent condition before the onset of winter.

A few days ago my wife and I attended the silage day at Lichtenburg about 260km west of Pretoria and my farm. This is an annual event organised by the Milk Producers Organisation of North West Province. This province experienced severe drought for more than two years and we were so elated to see the drought had been broken. The grass was green, the pastures in excellent condition and the maize was standing as “high as an elephant’s eye”, as they would sing in the musical Oklahoma.

But I left the area with an uneasy feeling. As we were driving past fields of the most beautiful maize – almost blue in colour – I noticed the ground at the end of one particular field was totally devoid of weeds.

The ground was so clean it looked as if it was sterile, but for these beautiful and towering maize plants. There can only be two explanations. One is that the ground has been inundated with very strong herbicides and chemical fertilisers, the other that the maize plants have been so manipulated to be totally immune to the dramatic chemical interference of both herbicides and fertiliser.

I hope the uneasy feeling of this very simple farmer will be proven wrong in a few years or decades. I hope the methods I have referred to are not devastating an already fragile environment or simply slowly poisoning us.

Danie Schutte is an organic Ayrshire dairy farmer who also processes dairy products on his 90hafarm near Pretoria, South Africa.