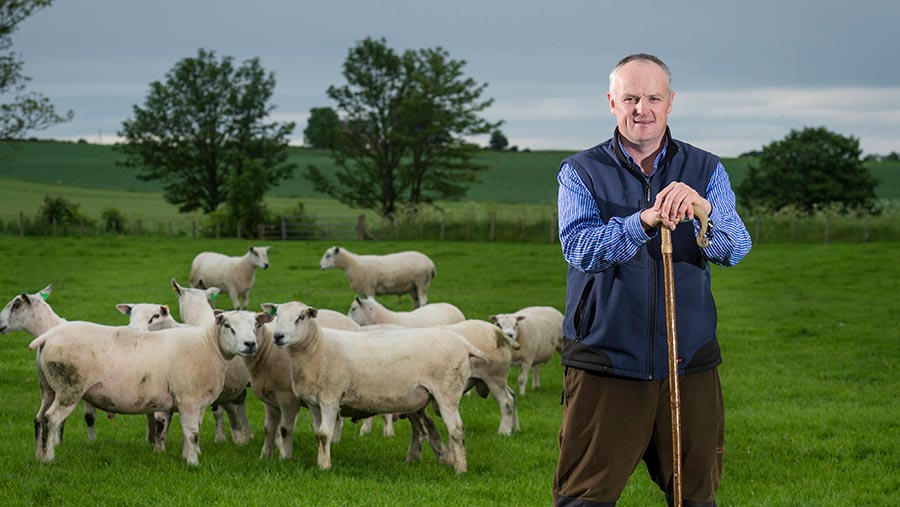 This is without doubt my favourite time of year. Everything is green (or trying to be green), you can see growth on a daily basis and sometimes you can even smell it.

It’s a delicate smell that can only be picked up on the days our friendly pig-farming neighbour doesn’t deliver his own special product – which also has a unique aroma.

There’s a an air of optimism around the farm. After a long lambing, which hasn’t been plain sailing, we are now all looking forward to summer.

There is no doubt a kind winter reduced feed bills, but extra weight on lambs – in particular outdoor-lambed singles – has been a real issue. By the sounds of things we are not alone.

Tailing and vaccinating is well under way and plans are being formed for early weaning of all lambs.

We are in the process of sowing two different red clover mixes, which will be used to finish lambs after weaning; one has 40% and the other 60% red clover.

Time will tell whether either do the job, but our plan is to swing back to finishing as many of our own lambs as possible now that staff numbers have returned to normal.

Following a successful first year growing fodder beet, we intend to sow another 30ha this year. We have refined our selection to six varieties.

Most of this year’s purebred heifer calves were born in the latter half of the calving period and were therefore younger, hence no improvement in weights.

Cross-bred heifers are now being marketed as high-health bulling heifers through Dingwall and Highland marts, while for the first time we will keep only stud Shorthorns to bull.

They will be mated to two different New Zealand/Australia embryo transfer two-year-old bulls, which have been selected for their ease of calving, easy fleshing and maternal attributes.

It’s important to keep up to speed with what’s going on in other parts of the world, so I have decided to embark on a short study tour to NZ in June. My next article might contain livestock of a different variety – there’s a fair chance lions might be mentioned.