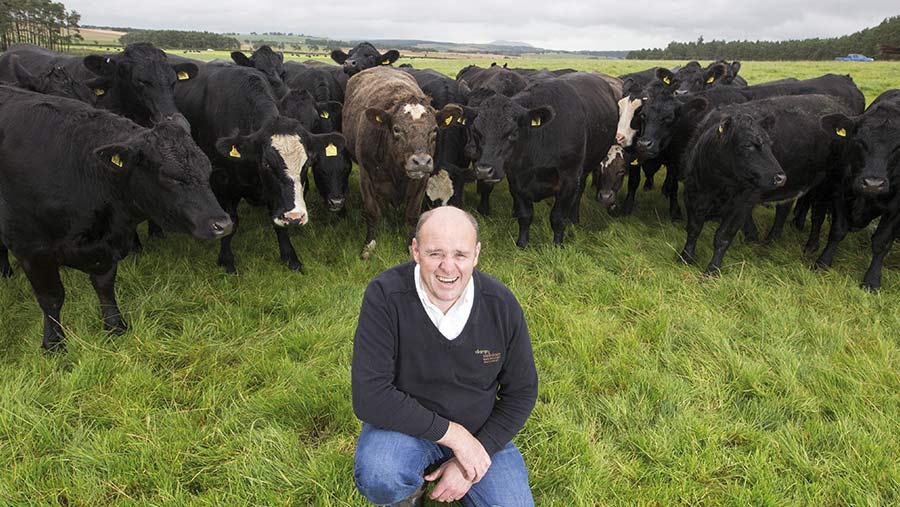 Like everyone else, due to the lack of moisture, grass growth this past month has been a real challenge although one field continues to produce as normal – the well named “Black Bog”.

As expected, the young grass is outperforming the older swards. Normally I graze the new swards with sheep in the first year to try to maximise the clover and help the grass tiller. This year, due to the reduced sheep numbers, some paddocks are being grazed with cattle and we will see if this makes much difference.

The arrival of some moisture was very welcome but most of the grass was already under stress and therefore a lot of seed heads have started to appear. This I count as failure on my part – poor management.

Swedes and undersown wholecrop have been sown and, now they have got some water, are starting to really motor, although I did have to spray the swedes for flea beetle this week.

Our cattle came out of the winter in better condition than usual and while they are all still putting on weight, growth rates are not as high as I would like for the time of year, with them achieving only 1.6kg a day, which I put down to no compensatory growth.

Saying all that, I loaded my first load of fat cattle straight off grass on 9 June, which is considerably earlier than I have ever had a large group ready before.

This year I have changed the time I move the cattle every day. Normally I would do it first thing in the morning but this year I am waiting until the afternoon. The idea is the sugars are higher in the grass later in the day and they always graze the most just after they are moved.

There has been next to no worm burden on the lambs but maybe the recent moisture will change that. With this in mind I moved the sheep to the small area of chicory, white and red clover to try to negate any worm surge.

The shop and especially the home delivery side have continued to grow rapidly. We are now planning for more long-term permanent social distancing measures to protect us and our customers, which will have a considerable cost on the business.

Michael Shannon finishes 150 head of mostly Angus beef stores each year and runs 280 Scotch Mules on a 100ha forage-only enterprise near Biggar, Lanarkshire, as well as free-range turkeys for Christmas. Meat is sold through his online business and farm shop Damn Delicious, with surpluses sold deadweight.