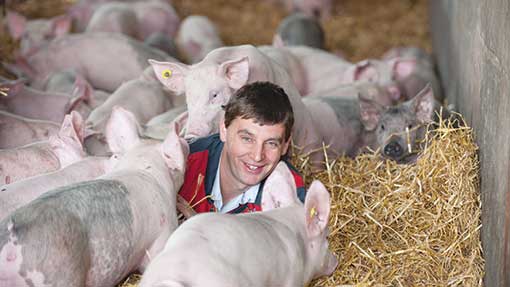 After two years of not knowing whether there would be a slaughter facility to kill Scotland’s pigs in Scotland, there has been a major breakthrough.

The two marketing co-ops, Scottish Pig Producers (SPP) and Scotlean, which handle most of Scotland’s slaughter pigs, have been working together to form a new producer co-op to buy the Brechin slaughter facility.

The new co-op, named Quality Pork (QPL) has also secured a grant from the Scottish government and a loan to modernise the facility, to create the capacity to kill 8,000 pigs a week, including some cull sows.

Tulip, which currently runs the aging plant, will continue to do so under the new owners.

The directors of SPP and Scotlean have been working relentlessly to get this venture up and running for a considerable time and their efforts have been rewarded, with a hopeful future for the Scottish pig industry. Well done.

Building work on our replacement grower accommodation is progressing and is now looking like more than a hole in the ground. Time will tell whether it will be finished before Christmas.

The sow medication programme will be finished by the time this goes to press and has gone without a hitch. There was a concern that the in-feed antibiotics would affect the sows’ appetites, but adding glucose to the diet seems to have done the trick, with very few sows requiring injections. We will blood test suckling pigs this week and hopefully results will come back negative for porcine reproductive and respiratory syndrome and enzootic pneumonia, allowing us to wean back on site again from 12 November.

My cousin Dave Green was crowned Farm Manager of the Year at the Farmers Weekly Awards. I did speak to him at an NFU meeting, but forgot to congratulate him, so well done and well deserved.

From the stories I have heard, everyone had a great night, enjoying themselves until the early hours, but probably not the following morning. As I said, Christmas will soon be here, bringing with it a busy social calendar. Let’s enjoy it while we can.