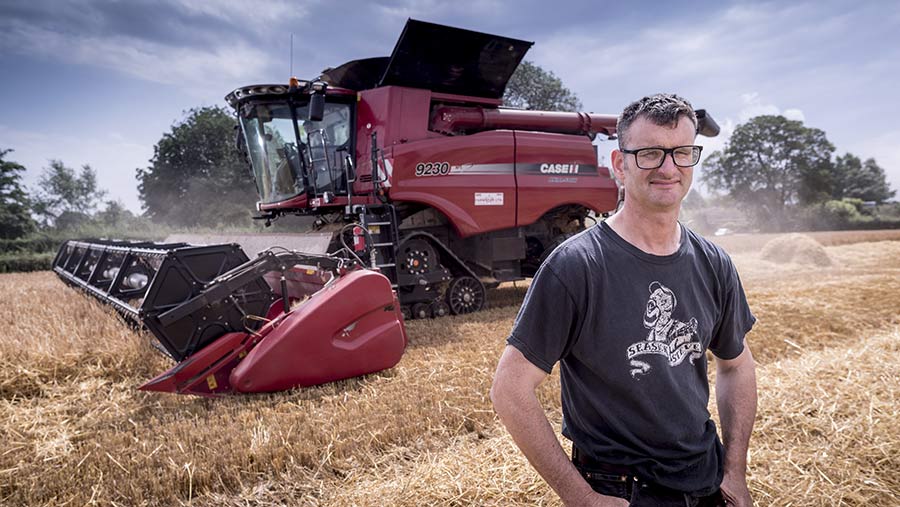 Now then, harvest started for us on 17 July, when we knocked down 16ha of wholecrop wheat into the clamp.

This did exceptionally well at 33.8t/ha and is now being fed out, replacing the maize in the bull’s ration.

We then went into the winter barley, which was a stop-start affair. We averaged 8.89t/ha, which was a real barn filler.

Norris McWhirter and Roy Castle have been to see me as we have beaten the world record for turning barley straw this year (at least five or six – we lost count).

Unfortunately, we still have some laid out in the swath which has now grown through three weeks after the combine cleared the field.

With all this rain and catchy weather, the limit has been reached for clapped bales and I am going to have to have some patience, which I am desperately short of.

The harvest in general has been sporadic and it seems that we have cut most of the corn in the dark.

When we do get into a rhythm, we are capable of shifting some corn.

In the wheat, we average 42t/hour. To achieve this, we have streamlined the whole operation.

The intake pit has been modified to take 16t, which means drivers just tip and go.

All the corn carts are pre-tared (weighed ahead of harvesting) and have their own weigh bridge fobs in the cab.

This means the operator just pulls on to the weighbridge and weighs – no getting on and off the tractor.

With the wheat straw, rightly or wrongly, we are baling it up straight out of the back of the combine because the straw is fit. We don’t need any more straw laid out.

The baler man has a fair task to keep up, as he has to do 800 bales/day to stand still.

I liken myself to Erwin Rommell – ”the desert fox” – and have taken a leaf out of his book.

We are fighting a battle with the weather, being careful not to out run our supply lines.

The 2019 harvest tune has been Kygo, Higher Love, which is a bit ironic as harvest 1986 tune was the original by Steve Winwood.

We were running a Massey 845 combine then – good tune, but dubious combine!