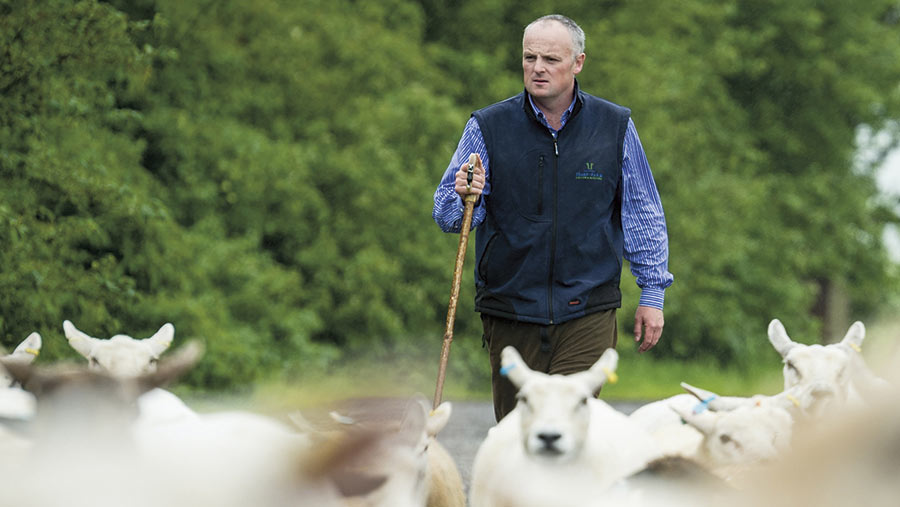 It’s been full on here at Fearn Farm over the past month.

All lambs have been weaned and our second on-farm lamb sale of 2,400 lambs achieved 100% clearance, with an average of just under £50.

Lambs heavier than 33kg were retained for finishing on farm using an 80% Italian ryegrass and 20% forage rape mix and should be gone within the next two months.

Most of the lambs sold were from our outlying farms and were born in late April/May.

We were satisfied with the sale, but still feel there is room for improvement.

We are still feeling the effect of expanding quickly in 2012, and until we have a regular aged flock with younger ewes we will have a larger tail-end than we want.

We have also retained 1,500 ewe lambs, which have been bolused. Our intention is to get as many as possible to 40kg by mating.

They will have priority over all other stock classes in the coming months, and as grass quality drops, they will be moved onto forage rape.

Cull ewes have also been sorted and sold. Some 250 remain and by early September they will also be ready to depart once they gain some condition.

Improved grass quality and better use means we have space for a few more ewes this autumn.

Sourcing these within budget could prove to be mission impossible, but I don’t begrudge the hill boys a decent trade for lambs and cast ewes – they need every penny they get.

Another option is to plough up some older grass at Fearn, replacing it with spring barley.

But at the moment I don’t feel brave enough to take that chance, so will stick to plan A.

Tower winter barley has been cut with an average yield of 9.2t/ha. We don’t plan to sow any this back-end, as growing costs are too high. It has been great for getting stubble turnips established over the years, but it’s one less hassle to deal with.

Spring barley harvest is just around the corner. Hopefully decent yields and quality will help offset a poor price, and if the weather plays ball, it will make life a lot easier.

Fencing the block of land we have taken on next door has started. We have three Kiwi lads with us for a month and they hope to make a good start on the project, but with 7km to do I doubt they will get it finished.

If anyone knows of anyone who wants to spend a few months in the north of Scotland fencing and playing rugby, please get in touch.