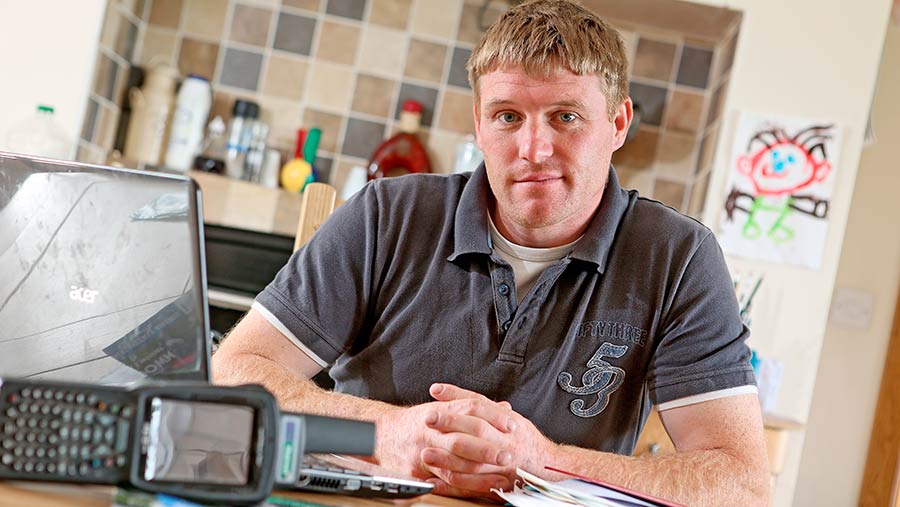 We scanned the lowland flock of sheep at the beginning of January.  The results were almost identical to last year, but pleasingly with fewer barrens.

We have housed some of ewes carrying twins and triplets, which will start lambing in mid-February, and started to introduce some concentrate feed.

We are using a high-quality 18% nut.  Ewes have come inside in good condition – better than last year.

The winter has been kind so far, we have had far less rain than last year, allowing us to keep sheep out longer.

This means no nuts will be fed out before lambing. My only concern about having a good winter is that it is going to be followed by a hard spring.

Hill ewes and our Aberdale ewes were scanned two weeks later – again with similar results. There were fewer triplets in the Aberdales, but some of the leaner ones were empty.

I find it difficult to get the balance right with the Aberdales. Too much grass and they have too many triplets, but keep them too tight and we have barrens.

We rescanned the empties from two weeks earlier and all but two were in lamb .

The week I write this is farmhouse breakfast week – a good exercise to promote British produce and the importance of farming. It also encourages discussion about farming issues around the kitchen table.

At the beginning of the week I attended a breakfast hosted by Roache and Ceinwen Davies at Trewythen.

This was attended by a good crowd, including our local MP, Glyn Davies. We are hosting our own farmhouse breakfast at the end of the week and hope to also have a good turnout.

This is the first year FUW Montgomeryshire has taken part in this event and we hope it will now be a regular occurrence.

Donations will go to the British Heart Foundation and I must thank Linda Brown of Neaudd Fach Baconry for supplying the bacon and sausages.

Thanks also to those who supplied the eggs and bread. I am sure it will be a success and talk will be flowing, as well as the teas and coffees.