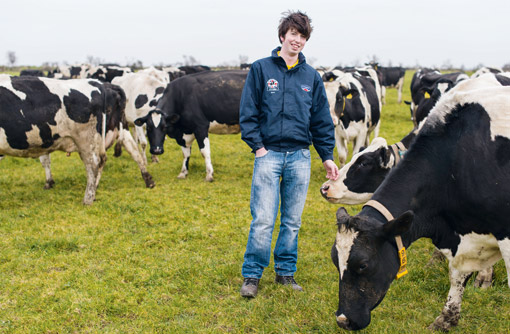 A good spell of weather has allowed us to cut all our first lot of silage. There was a decent amount of it and it will be interesting to analyse it.

We’ve also been able to plant all of our maize and fodder beet. The first of it is up already and looking green and healthy. I hope to be saying that in a few months when its ready to harvest.

This spring has also seen us plant more stubble turnips, only this time it has been direct drilled straight into an old grass ley. Hopefully we can start grazing it sometime in August and be finished by September to allow for a reseed.

As we chase more milk from grazed grass it is quickly becoming apparent how old and tired some of these leys are and our grassland reseeding has stepped up a gear as a result.

As I write this, the Royal Cornwall Show has just finished and what glorious weather it was. The sun shone and all the animals entered for competitions were immaculately turned out. It never fails to amaze me the dedication of those that show their animals.

Having all the same trials and tribulations as anyone else, as well as all the problems that can arise in preparing the beasts for shows, they still put on a wonderful spectacle for the public to see.

These animals also serve a purpose in training the next generation. I helped steward Cornwall YFC’s dairy stock judging on Saturday and I was impressed by the number of keen judges having a go.

Acting as timekeeper, I also got to listen to the members present their reasons to the master judge. Each member had different views on which cow they preferred and gave good reasons to back that up.

I must admit, at times it was as if they each had six different cows placed in front of them, such was the difference in opinion. Having such a wide and diverse pool of dairy farmers each with their own ideal cow in mind can only serve well for the future.