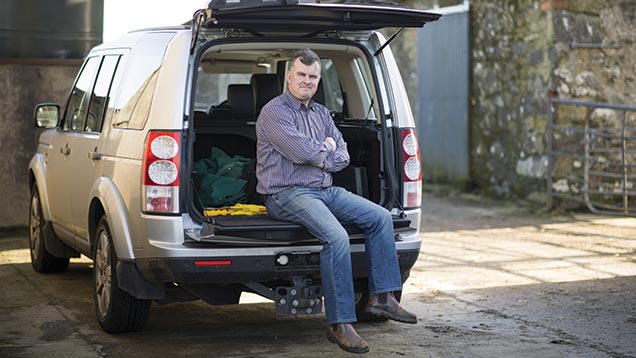 Up early with a list in hand heading to airport for Stirling bull sales, I was dismayed to find my flight had been delayed by 90min.

Subsequently, I missed the judging. But when I did eventually make it to the sale, I was most impressed with the power and shape of the bulls. I’d marked the bulls in the catalogue, lairage had been arranged at Annan, so I just had to wait on the Limousin sale to start.

By the time the sale started – two hours late – it was nearly time to head back to Glasgow to fly home, so I went home empty handed.

However, I did meet Bob and Kay Adams. Their string of bulls was impressive and I’m quite confident we can do business on another day. So not all was lost.

The following Saturday I went to see a friend – an Aberdeen Angus breeder – to secure at least part of my shopping list – a young bull that can sweep up after AI heifers.

The slurry is partly spread and the urea is being applied as I write, at 61kg/ha on paddocks. Store bullocks had been turned out, but are now rehoused and waiting for another dry window.

Calving and lambing has started, and with all the beef cattle sold this week, I’ve been able to clean out the houses and spread the cows out.

I’m continuing to BVD tag all calves, even the dead ones. The NI programme, although still voluntary, will hopefully become compulsory quite soon. Reports from markets have said tested calves are worth more so it makes sense, doesn’t it?

Suckler herd dispersals’ have become fashionable lately. The Corry family sold their prize-winning herd to average nearly £1,900 a head [??], and later in the month renowned show calf producer Jalex sold 250 head. Is this the way forward? Suckler producers are not being rewarded well enough for their beef.

With the new CAP reform about to become reality it seems all our departments of agriculture are having problems coming to terms with the details and how to implement them.

I’m thinking the next 12 months could be slow and torturous if you are relying on the brown envelope.

Sam Chesney runs a spring-calving herd of 120 Limousin-cross sucklers in Kircubbin, Northern Ireland. He was 2011 Farmers Weekly Beef Farmer of the Year