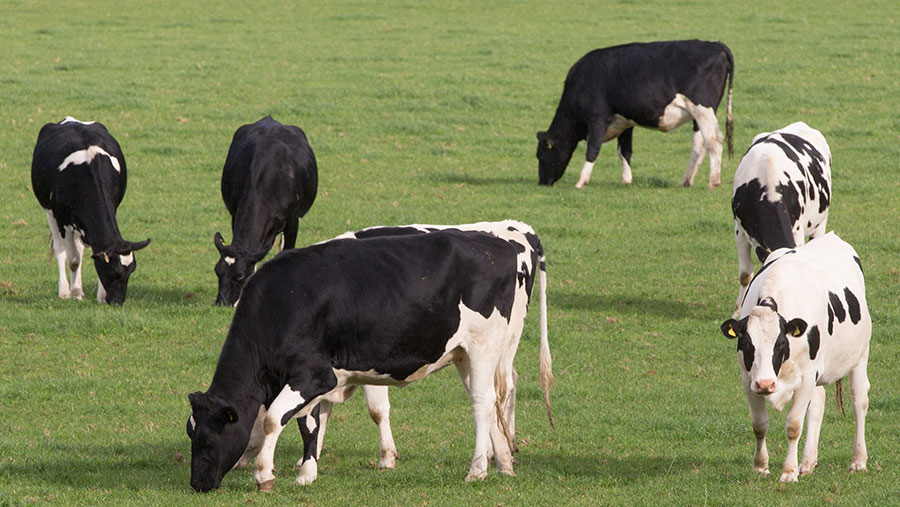 With heifer growth rates jeopardised by late spring turnout, it has never been more important to allocate priority grazing on the best-quality pastures for underweight replacements.

Ideally, heifers in grass-based herds should be turned out to grass six weeks before breeding because weight gains of 1kg a day can mostly be achieved at pasture.

She says steps can still be taken to minimise the effect on future fertility and ensure replacements achieve breeding weight targets, whatever the system, feed quality or weather conditions.

1. Calculate the growth rates that underweight heifers must achieve before their target AI date

You can then formulate a diet around a fresh grass sample to achieve compensatory growth.

Depending on the calving pattern, compensatory growth diets can be based on silage aftermaths, with or without concentrates.

Heifers fully fed on grass for 45 days after turnout can gain 50kg liveweight, but if grass is in short supply, rolled barley is suitable to feed with grass.

At the end of the grazing season, consider housing lighter heifers early on a high-density diet.

2. Weigh heifers regularly, ideally monthly, to allow time for the diet to be adjusted if growth rates are not where they should be

The more frequently heifers are weighed, the more quickly a problem will be detected.

Mature cow weight varies depending on breed, but target weights can be calculated by using a proportion of mature bodyweight. For example, a 30% mature bodyweight should be achieved at six months, 60% at 15 months or breeding and 90% at calving.

Achieving the 30-60-90 percentage targets is more important than the pattern of growth.

3. Work out how much weight you need heifers to put on daily

For example, assuming an average birth bodyweight of 45kg, and a calving date of 20 February, calves have 425 days to gain 285kg of liveweight before mating the following year.

4. Don’t overestimate the average daily liveweight gain that heifers can achieve indoors on silage or you will have underweight heifers at turnout

On a silage-only diet, the weight gain on a 11.2MJ ME silage could be as low as 0.3kg a day, but the better the quality of silage, the higher the weight gain. The ultimate goal is to have good-quality silage topped up with concentrates.

5. If heifers are not on target, some supplementation will be needed when they are on silage at housing

It is important to know the quality of the silage you are feeding, so get this analysed. Then, base the supplementary ration on the protein content of that silage.

Note that no more than 50% of the diet should come from concentrates when supplementing silage – avoid overfeeding or heifers will lay down too much fat in their udders.

6. Separate lighter heifers into their own management group

At grass, run this group as a separate mob and provide a luxury intake of grass by grazing in front of the main group.

7. Good-quality silage is mostly sufficient for in-calf heifers during the second winter, provided they are at target weight at housing

As a rule, spring-born in-calf replacement heifers will eat 1.1t of 20% DM silage a month.

Heifers that are below target liveweight can be fed up to 2kg a head a day of concentrates until six to eight weeks before calving.

Kale, stubble turnips or other forage crops can be supplemented with silage or hay.

Daily growth rates can be disappointing while heifers are grazing winter forage crops, but they soon catch up when they transfer to pasture.

10. Don’t overlook the influence of appropriate ventilation and feed space at housing

Both of these can have a big effect on weight gain. Heifers must also have clean water at all times.

If heifers are small, select bulls with the most suitable calving ease, but if they are excessively small (only 40% of mature weight) they should be withheld from mating and either sold or grown until they meet minimum breeding weights.

If your heifers are underweight, avoid a similar situation occurring again by reviewing your heifer-rearing management policy.

Be proactive with monitoring heifer weights and respond quickly when growth targets are not being achieved.

How could moving the targets help?

Farmers who aim to grow their heifers to 50% of mature cow weight by 12 months have time to react to deficits in performance, says Richard Davies, senior knowledge exchange manager at AHDB Dairy.

The industry-accepted target is 60% mature cow weight at bulling, but Mr Davies believes a 12-month target gives farmers more opportunity to take remedial action to get underperformers back on track.

“It is too late at 15 months to correct growth, but if farmers have three to four months to work with they can reassess their heifer-rearing policy and get lighter heifers back on target,” he says.