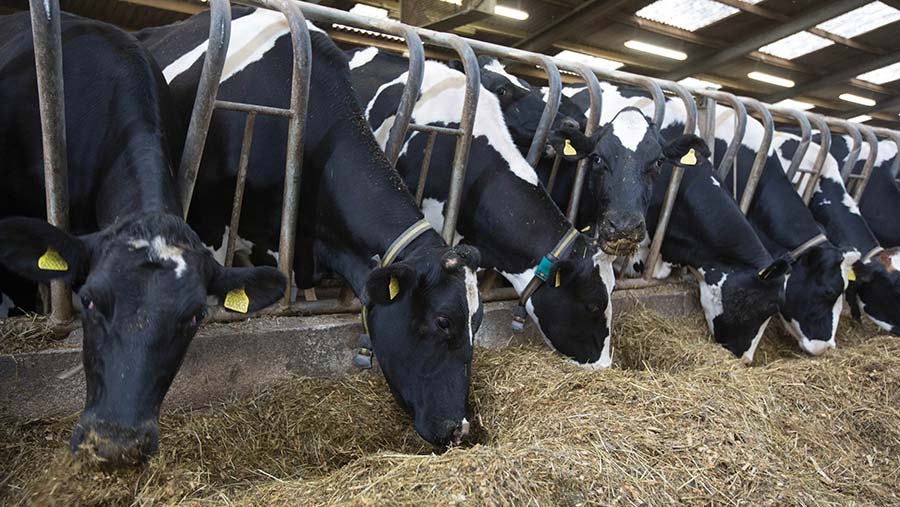 Farmers are being warned to keep their eyes peeled for signs of contamination in feed after sampling has shown high mycotoxin risk levels.

UK-wide sampling carried out by Alltech has shown that 46% of total mixed rations (TMR) produced using spring-summer silage have a moderate to high mycotoxin risk.

“The most common types of mycotoxin found were the Type A Trichothecenes and the Penicilliums,” explains Bob Kendal, North England ruminant manager at Alltech.

“Penicilliums are found in silages and are of particular concern for ruminants. The mould starts life white in colour before developing a blue/grey/green colour and, as the name suggests, can have an antibiotic effect on rumen bacteria.

“This manifests itself as acidosis-like symptoms, dung consistency and sudden drops in milk.

“Type A Trichothecenes includes T-2 toxin which can have a serious effect on the gut of the cow and reduce intakes and performance.”

See also: A guide to preventing mycotoxins in silage

There are five key signs of mycotoxin, which farmers should look out for:

Mycotoxins are commonly produced by Penicillium, Aspergillus and Fusarium moulds, which can be identified by colour:

Any spoiled feed should be regularly removed, so it doesn’t enter the diet.

If faeces are loose or inconsistent, it signifies a problem with digestion and gut health, which could be a sign of a mycotoxin challenge.

Reduced feed intake affecting yields and body condition scores (BCS) can also be a sign of gastrointestinal issues caused by consumption of mycotoxins.

External indicators of mycotoxin contamination include:

A lethargic herd could also indicate an intake of fumonisins (from fusarium mould). This will be seen through:

A sudden or temporary milk loss – which is hugely problematic for the farm – could indicate contaminated feed, as could an increased somatic cell count (SCC).

The SCC increase would be caused by mycotoxins suppressing the immune system and making cows more susceptible to disease such as bacterial challenge.

Mycotoxins can have indirect impacts on breeding through other health issues, but some mycotoxins have also been found to be directly linked with cystic ovaries and embryonic mortality. Therefore, unexplained lower pregnancy rates could be a warning sign of a mycotoxin problem.

Action in the case of suspected mycotoxin issue

While mycotoxins are inevitable to some extent and prevention where possible is better than cure, there are measures you can take to reduce their impact.

Farmers wishing to raise awareness among farm staff can request a free A4 waterproof protocol poster from the Alltech website for the parlour or farm office.