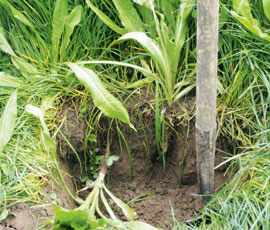 Grazing chicory mixed swards can boost milk yields, but only when managed correctly.

Chicory may be more commonly associated with sheep, but dairy farmers could be missing a trick by not including the perennial in grazing swards.

One Somerset farm is reporting a 2-2.5 litre a cow a day increase in milk yields when dairy cows are grazed on grass and chicory leys.

Herdsman Philip Hayman, said being a mixed farm with dairy, sheep and beef, meant chicory leys needed to work for all stock.

“We’ve noticed the benefit for sheep, particularly with lamb fattening. Lambs noticeably put on more meat and we finished all lambs off grass and chicory last year for the first time.”

The anthelmintic properties of chicory have also allowed the Philip Hayman and brother Charlie to cut worming use by half.

However, after deciding to strip graze the 90 Holstein dairy cows on the chicory, perennial ryegrass, clover swards, Philip Hayman noticed an extra 200 litres a day in the bulk tank.

“Cows were out on grass/chicory swards from the end of August last year until mid-November – it just kept growing.”

“In a general dairy grazing ley, chicory should be included at a rate of 0.5-0.75kg/acre. The only downside to including it is its low dry matter. This means a cow needs to eat a lot to meet its DM needs.”

Consequently, using a 100% Chicory sward may not be appropriate.

“Chicory should also not make up more than 30% of total dry matter intakes for dairy cows, to avoid risk of milk taint,” he said.

The plant’s large tap root enables it to thrive in dry conditions, but also allows it to reach a different mineral profile in the soil – potentially helping to keep stock healthy.

“The tap root is very aggressive and will chase moisture, bust through pans and grow around obstacles. I’ve seen roots grow to depths of 12-18in in light soils,” explained Mr Cook.

The plant is high in zinc (which can be beneficial to foot health), potassium (which can improve palatability), and copper (which can aid fertility).

Close grazing management is also crucial with chicory mix leys with a maximum 21-day grazing cycle necessary. This can often be a challenge as grass can grow at a different speed.

Ideally, chicory should be grazed at eight inches high, said Robin Wale, feed specialist for Crediton Milling. “Dairy producers often think dairy cows won’t graze chicory, but this is often a misconception because the plant is growing so fast.”

Close attention must also be paid to weed control before establishment, as spraying will kill off the plant. Establishment is easier in a new ley because it is not competitive enough in existing leys, said Mr Cook. However, it can be sown as strips in the field to enable weed control.

Chicory mix swards have been cut for silage at Netherton Farm when they have got ahead. However, Mr Cook said the plant was recommended first and foremost for grazing.

“I wouldn’t sow chicory in a silage ley purposefully, but you could cut chicory mixes for silage if you needed to. Stems can become big and woody which needs to be considered when bailing.

“However, all farmers should be targeting their swards for their end use and have dedicated ground for silaging and grazing,” he said.

Netherton Farm has also planted 12 acres of New Zealand, cool season grasses with perennial ryegrasses and clover and 45 acres of the same mix with chicory for sheep grazing.

Robert Baker, Pearce Seeds, explained that cool season grasses were capable of growing earlier and later in the season, giving the potential to extend the grazing season. “They don’t seem to be effected by extreme cold – even this season,” he said.

However, producers needed to be aware that fields would need to be grazed much quicker than conventional leys.

“A two-week grazing rotation is needed on these swards. If they were left for three week you would definitely see a reduction in milk yields.” Consequently, set stocking may not be appropriate for these mixes.

The New Zealand leys grow like the clappers, said Charlie Hayman. “Sheep were grazing these fields from the start of May last year, but then we had to take a silage cut at the end of May as grass had got too far ahead to graze with the dairy cows – it just shows how well you have to manage them.”