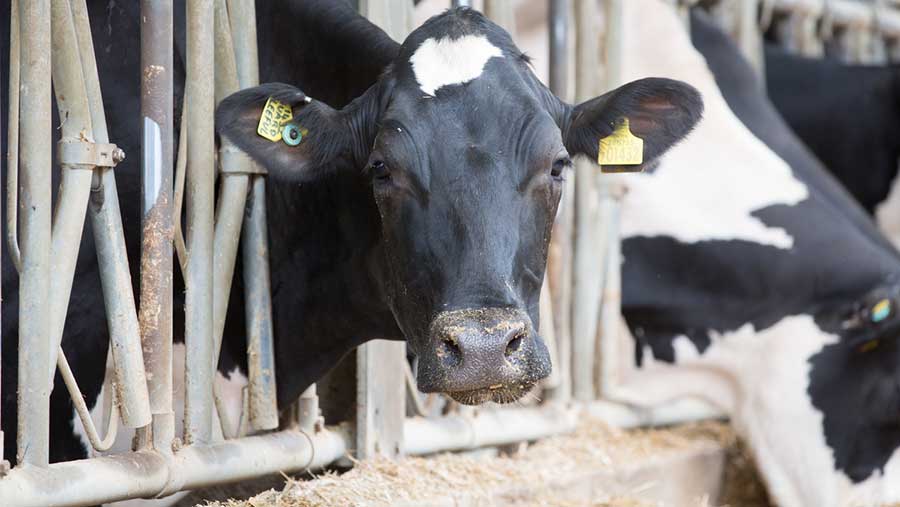 Regional reports of high moisture levels in silage clamps, and in extreme cases slipping, could mean major ration balancing is required by farmers this autumn.

Certain areas are reporting dry matters of 20%, with west Wales, Cumbria and Scotland in particular reporting movement in clamps.

In some cases the issue of wet silage is being exacerbated by steep clamps, leading to overconsolidation of grass.

Although some wet forages are feeding well, and in many cases better than last year, major ration balancing considerations may be required, with cheap cereals not necessarily the best go-to option.

“I think it is going to be an awkward winter for diet balancing nutrients.” says Ken Marsh, ForFarmers dairy specialist in west Wales.

“I am balancing diets using maize to good effect. As a slower release carbohydrate it shouldn’t cause acidosis.”

Mr Marsh says wet silage has led to loose cows, with some mycotoxin issues on occasion.

He hopes the combination of structural fibre and slow release carbohydrate offered by a good maize crop could be a “match made in heaven” for wet silages this winter.

Farms with moving silage should note the risk of localised spoilage as air enters the clamp where ravines form.

Watch out in the wet

This poses a very different problem to surface wastage in a poorly consolidated or badly sealed clamp, where there will be a clear layer of material to be removed.

Hefin Richards of Midlands-based Profeed Nutrition Consultancy says dealing with this could be a ‘fiddly job’ requiring contaminated silage to be removed by hand as problem areas are spotted as the herd progresses through the clamp.

“This is likely to be a hand and fork job rather than a job for machines,” advises Mr Richards.

“In areas of spoilage there will be a general deterioration in feed quality, with protein breakdown, energy and DM losses, plus significant risk of rumen and animal health issues if decaying material is fed.”

To balance good quality but wet forage rations, Mr Richards suggests looking at sugar beet and soya hulls, and warns that cereals, while being value for money at the moment, could make acid loading problems worse.

“Cereals are cheap but you have to be careful,” he warns.

“By soda treating you can safely feed a higher level of cereal than you can if grain is rolled or milled.”

Wet silage also brings the risk of depressed DM intake, in addition to lower pH and movement in the clamp, adds Mr Richards.

High moisture levels could also lead to variation in quality within the clamp and inaccurate forage tests.

He says wet clamps with high faces could also pose a health and safety risk.

He suggests for future years if farmers are filling clamps in a day, they should move away from the traditional Dorset wedge method.

“Today the Dorset wedge is irrelevant on most farms as it was originally developed when farms were taking three to four days to fill a clamp,” says Dr Davies.

“This year we have seen overconsolidation of good quality grass.”

He says in future at harvest, silage with low DMs of 20% can have clamp structure improved with a longer chop length of four inches.

“Instead of working on a traditional wedge approach, increasingly we are seeing grass ensiled on a steeper wedge, nearly to the point of being bulldozed, and as such wetter grass is moving.”