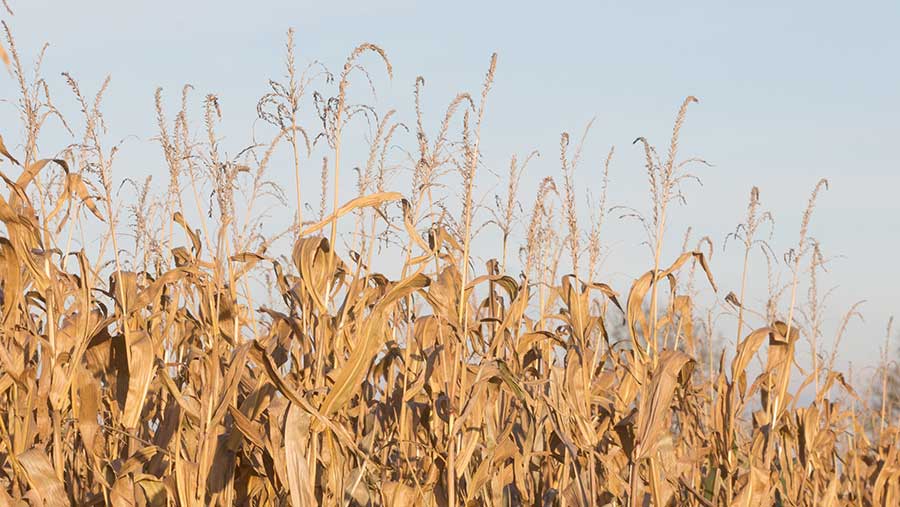 Maize crops that have been stressed by the drought may be saved yet and farmers shouldn’t be too quick to try to cut their losses by harvesting them too early.

Some farmers with drought-stressed crops are reportedly already thinking of harvesting, just to salvage something, but Mike Wilkinson, Maize Growers Association (MGA) nutritionist, said: “Panic action isn’t necessary quite yet.”

He added: “I don’t think farmers should do anything until the middle of August, because if we do get more rain then the crop may recover.

“If it has deep roots, it should be okay. If crops are stressed I think farmers should hold on for at least two weeks [to mid-August].”

See also: How to manage maize in drought conditions

He said he had visited drought-stressed maize crops on lighter soils in Lincolnshire that looked like “totally different crops” since the rain arrived.

“They have been very drought-stressed, so they have not been very tall and all the leaves have been curled tight to prevent evaporation.”

But upon inspection on Sunday (29 July), following approximately 20ml of rain over the weekend, he said the leaves had opened up and were looking greener.

What if the crop has already failed?

Many crops have suffered badly from the drought and some have even failed completely – petering out at a height of 25cm.

If growers haven’t already ploughed completely failed crops they need to, and another crop should be grown in its place, Prof Mike Wilkinson recommended.

He suggested sowing Italian ryegrass or a 50/50 mix of Westerwold and Italian ryegress – grass that would grow fairly rapidly, provided rain comes, to give an autumn cut.

“My advice would be to monitor crops closely in the next couple of weeks because some will recover for sure. Others may not, but I haven’t seen many that won’t give us something.”

He said even some of the shorter crops measuring waist height were tasseling and could still provide farmers with a good feed source.

The ear – the husk, grain and cob – makes up about half the total dry matter of the maize plant.

Prof Wilkinson predicted ear dry matter would be more than that this year, provided the grain fills in coming weeks, because vegetative growth has been stunted by the drought.

However, the next few weeks will be critical in determining this outcome, he said.

How to determine crop success in the next few weeks

Prof Wilkinson said the real issue is whether the tassels (male part of the plant) and silks (female part) are synchronised well enough to get proper pollination and grain filling.

“The problem is it has done all its vegetative growth and all that can happen now is pollination and grain filling.”

To determine if pollination and grain filling have been successful, Prof Wilkinson advised growers to open up the husks in mid-August and check if the cob has produced a grain or whether only small nodules have formed.

If grain hasn’t formed then it’s not going to do very much from mid-August onwards, he added.

Deciding on if you should you cut?

If grain hasn’t filled, he said farmers should cut and ensile the crop, but he warned that green material shouldn’t be fed to cattle because of the high risk of nitrate poisoning.

“After ensiling, leave the crop for at least four weeks before feeding to allow nitrate levels to decrease.”

Until mid-August it’s going to be a long wait for many desperate growers.