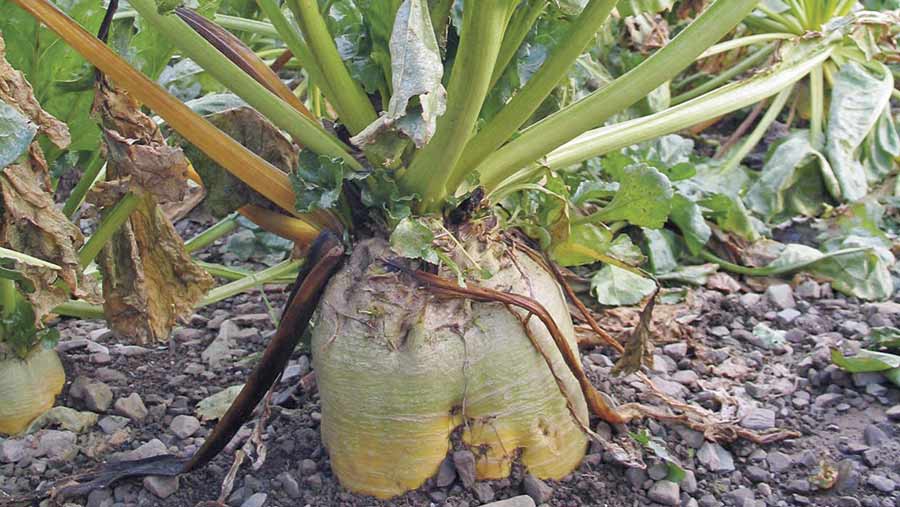 Even at a conservative yield of 18t DM/ha, fodder beet can provide more than double the dry matter of kale, which averages 7.5t DM/ha.

But the crop needs good attention to detail at the establishment and growing stages to achieve this exceptional dry matter potential.

Fodder beet’s high yield means less land is needed to grow the winter feed requirements of livestock and this was a big draw for Arthur and Menna Williams. 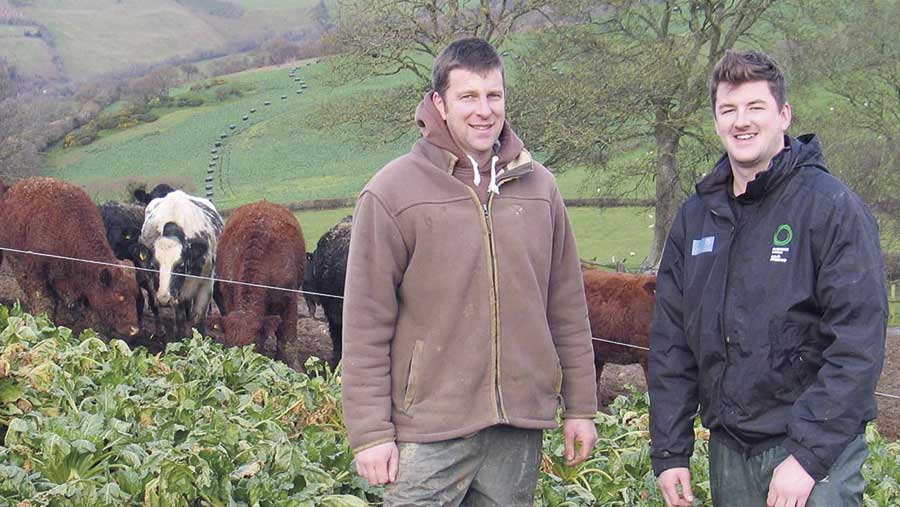 Their farm, Carwed Fynydd, near Denbigh, has free draining soils and they have taken advantage of this by growing crops for winter grazing.

As a Farming Connect Focus Site they are growing fodder beet for the first time to compare its performance to housing and their traditional system of out-wintering on kale.

Three hectares have been planted for grazing 20 R2 breeding heifers for 150 days and also 500 in-lamb ewes for 70 days prior to housing.

To supplement the diet, baled silage will provide 50% of their daily dietary needs.

At £646/ha, the crop cost £1,939 to grow; in comparison, silage and straw at housing for the equivalent number of stock would have been in the region of £7,860, says Rhidian Jones, of Kite Consulting, who analysed the trials results on behalf of Farming Connect.

Based on these figures, that represents a three-to-one return on investment, he calculates.

Grassland and forage specialist Charlie Morgan, who provided advice at Carwed Fynydd, says fodder beet is a good main crop for winter feeding but without attention to detail potential yield can be lost.

Yield is a significant reason why more farmers are introducing it into their rotation, he says.

“It is a high investment crop to grow but it can facilitate an increase in stocking density and release opportunity elsewhere.

“You need half the acreage to grow the equivalent dry matter of other brassicas and in areas where land is at a premium this is a huge advantage.”

He values a megajoule of energy for both fodder beet and kale at 1p, but fodder beet produces more feed on a smaller acreage and this means fewer inputs.

Also, because fodder beet is not a brassica, it provides another break in the rotation.

Although it can be grazed by both cattle and sheep, Mr Morgan believes it is better suited to cattle.

“Cattle eat their way through it more quickly so you haven’t got the issue of water pooling,” he says.

Runback is important. Mr Morgan advises sowing the crop in the centre of fields, leaving the boundaries as runback for livestock to lie on and for placing silage or straw bales as fibre in the diet.