Many dairy farmers are now looking to lift milk solids production as they move to manufacturing contracts.

In a new four-part series, Farmers Weekly will be examining how fat and protein gains can be made. In this first article, Rhian Price discovers the wider benefits of switching to a multi-cut system.

Switching from a traditional three-cut silage system to cutting more frequently like the Dutch, Americans and Danes is one way of lifting total milk solids production alongside genetics.

While some farmers producing high volumes of milk remain fearful a shift towards solids will impact yield, Kite Consultant Tony Jackson says this doesn’t have to be the case.

He has recently returned from the Netherlands where black-and-white dairy producers are currently averaging 9,658kg milk at 4.32% fat and 3.52% protein (according to Veepro Holland, the information centre for Dutch Cattle).

“The Dutch do very light cuts, very dry stuff (45% DM) and they cut every month. It is a given they do it that way,” says Mr Jackson, who adds it is the same principle as spring grazing.

“If you graze the grass off more frequently you get more grass – and better quality stuff,” he explains.

The benefits of switching to a multi-cut system

Independent silage consultant Dave Davies of Silage Solutions says by taking an early cut in late April/early May farmers can improve silage Metabolisable Energy (ME), which will have a positive impact on rumen health and milk yield.

“We graze grass when there is no stem so why do we expect to produce a lot of milk from grass silage that is stemmy?

“Actually, grass can provide as much energy as maize and energy is the main challenge in the UK – probably more so than protein. By cutting more frequently you can improve the energy value of your grass and there’s no reason why you can’t get 11.5- 12ME.

While some farmers in wetter parts of the UK may find it a challenge to cut earlier it can actually be beneficial in high rainfall areas because the crops are lighter and dry more quickly, he explains.

“Early cuts tend to be lighter – generally 2t DM/ha less – and grass wilts quicker because it is spread over a bigger surface area so wilting time can be three to four hours shorter.”

In fact, grass that’s mown at 9am could be picked up later that afternoon, says Dr Davies.

On average, 3-4% dry matter and up to 6% units of sugars can be lost in the field within a 24-hour wilt so speeding up the process will reduce sugar and protein losses. In turn, cutting it when it is higher in digestibility – more leaf and less fibre – will drive better cow intakes. 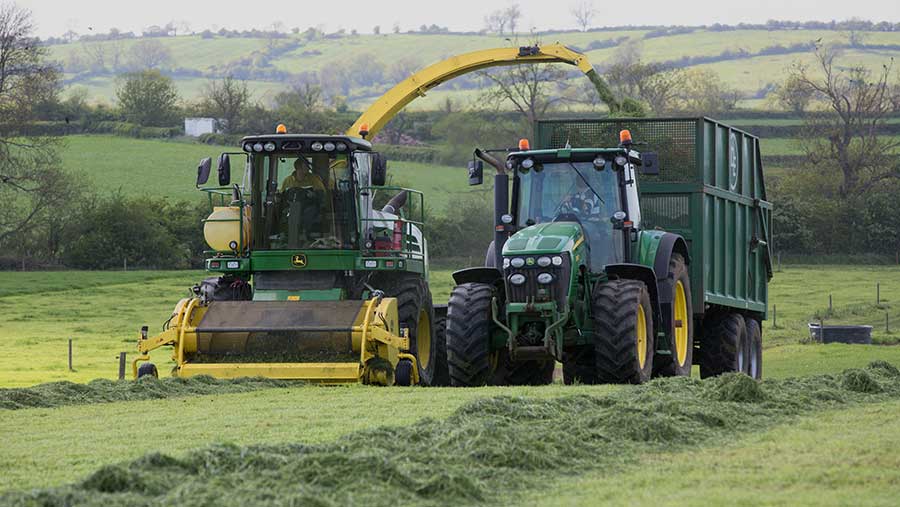 “The more indigestible forage is the longer it needs to reside in the rumen to be broken down which slows rumen passage. If the rumen empties quicker cows will eat again more quickly.”

Getting the right chop length and dry matter is crucial, however, and this will depend on forage dry matter.

Paul Macer from Kite says the target for dry matter on a multi-cut system should be 35% or higher with a chop length of 6cm (2 ½ in).

Achieving a higher dry matter will lower acid load and create a more stable product that is more rumen friendly too, he adds.

This drives milk quality because you haven’t got fluctuations in pH that normally disrupt butterfat, he adds.

One way to mitigate large contracting bills is to ask your contractor if they will change the payment terms from per acre to per hour or per tonne (as yield will be reduced).

In many cases, there will need to a mix of hourly and acre-based payments.

“You will still have to mow it and ted it so there may need to be a bit of a hybrid” adds Mr Jackson.

“It’s important it’s done properly and on time. It’s not just about reducing costs. There’s no room for slippage so you have to be careful you don’t drive contractor costs down to the point where you have an unreliable contractor.”

“A lot of farmers think about silage costs in the wrong way. They never look at the cost per litre of milk produced.

“That buys you more than your extra contracting costs.”

Therefore, he says assessing fields for compaction regularly throughout the season and taking appropriate action is essential to avoid issues.

An AHDB Dairy study conducted in 2016 found CTF can halve the area covered by tractor tyres and reduce soil compaction by a quarter.

Which leys are suitable?

“I don’t think cut and graze type mixes (five- to six-year leys) are capable of giving you the yields to justify the contracting costs.”

The other advantage of having short, three-year leys is it allows farmers to stitch in more aggressive hybrid and Italian varieties. And if compaction does need to be alleviated farmers can choose to plough or subsoil annually depending on the severity.

However, Mr Macer says quality is also a factor that must be considered and to maintain quality throughout the season he suggests using a perennial mix like the Dutch.“Italian ryegrass can run to seed very quickly in drought conditions and the quality is going to be much more difficult to maintain after the first cut.”

Advice if you’re switching to a multi-cut system:

Dairy farmers Martin and James Evans believe they can drive the production of milk solids by 82kg a cow a year by switching to cutting monthly and earn an extra 1.8p/litre on their current Arla contract.

With feed costs currently at £4.49 a head a day (55p/kg dm) further feed cost savings would also be realised by increasing forage intakes by 1-1.5kg DM a cow.

Already advocates of a four-cut silage system, they have been drawn to a multi-cut system after trips to the US and the Netherlands where James witnessed the production gains first-hand.

The farm began taking four cuts a year a few years ago at the same time as switching to three times-a-day milking and have seen yields lift to 38 litres daily and pregnancy rates hit 25% in the 500-cow milking herd.

But this year they are bringing cutting dates forward to April and will reduce their cutting interval to 28 days, taking them to a total of six cuts to lift total milk solids produced.

“As high yielders, we are not good grass managers and we have got to have a mindset change,” admits Martin who also runs a contracting enterprise which makes it easier to manage cutting more often.

With their herd of 550 Holsteins currently yielding 11,500 litres a cow a year, the aim is to increase forage inclusion to 55-60% while maintaining milk yield.

“In the US last month, I saw some herds that were doing between 40-45 litres a cow with a 50-60% of forage in the diet. I thought we had closed the gap on US farms but they have gone to the next level,” says James.

“We have the wrong mindset. It is all about bulk and not quality,” he adds.