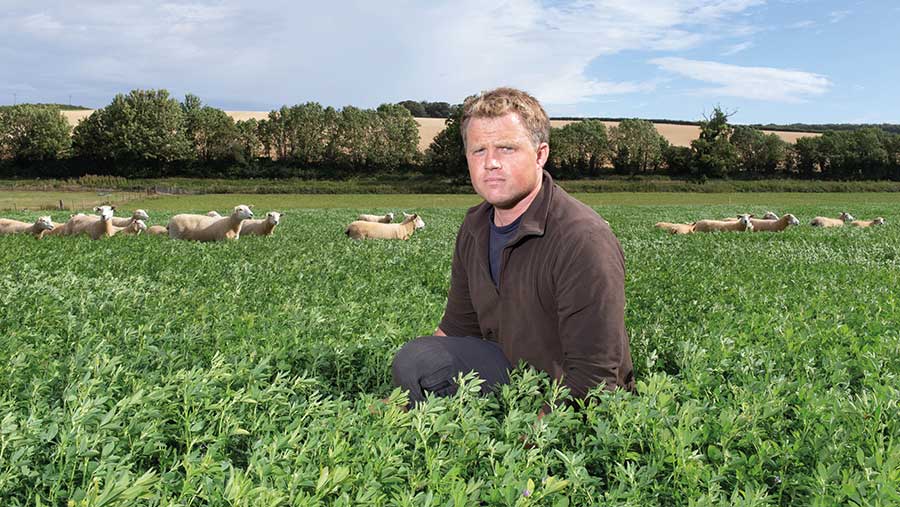 A pioneering project will finally give UK farmers an insight into the practicalities of growing and feeding sheep lucerne.

Lucerne is widely used as a crop for grazing sheep in New Zealand, but in the UK it is largely ensiled for total mixed ration systems.

The trial, which is being supported by Innovative Farmers and carried out at two UK farms, will investigate if it is possible to extend the grazing season for sheep by using lucerne.

See also: The benefits of growing and feeding lucerne to dairy cows

But extended periods of dry weather resulted in forage pinches in the summer.

“We have quite light soils and it is quite common for us to get six weeks without rain,” explains Mr Cross, who farms 385ha (950 acres) on a tenancy.

To help alleviate the pressure on twin-bearing ewe lambs and improve weaning weights, he originally installed a milking machine to rear the second lamb.

But he concedes it was too expensive and a lot of extra work.

Keen to improve soil condition and explore alternatives to rising costs and increasing use of nitrogen, Mr Cross visited New Zealand on a study trip to examine how lucerne could fit into his system.

He then began the two-year project last year with help from lead researcher Liz Genever, who is overseeing the project and collecting data on:

Over the course of the trial, Farmers Weekly will follow the progress at Glovers Farm.

In this first article, we visited the farm to report on the first set of results post weaning.

An 6ha block of lucerne was established in June 2019 following a failed crop of rape and chicory, but the rapeseed was decimated by flea beetle. A second, 2ha adjoining paddock was drilled in May.

The lucerne variety, Luzelle, was chosen for its low growing point and, therefore, improved tolerance to grazing and reasonable winter dormancy.

Mr Cross has a good availability of winter cover crops so ewes can be moved off the farm to allow lucerne enough time to rest over the winter.

One-hundred and one twin-bearing ewe lambs (scanned at 138% after two cycles) were transitioned on to the 15cm crop one month pre-lambing and given access to fodder beet and a back run of grass. Lambing started on 5 April for 32 days.

They began a rotation one week after lambing finished (14 May).

The field was divided into seven paddocks, about 0.85ha in size. Mr Cross started on a 28-day rotation and extended this to 35 days as covers increased. 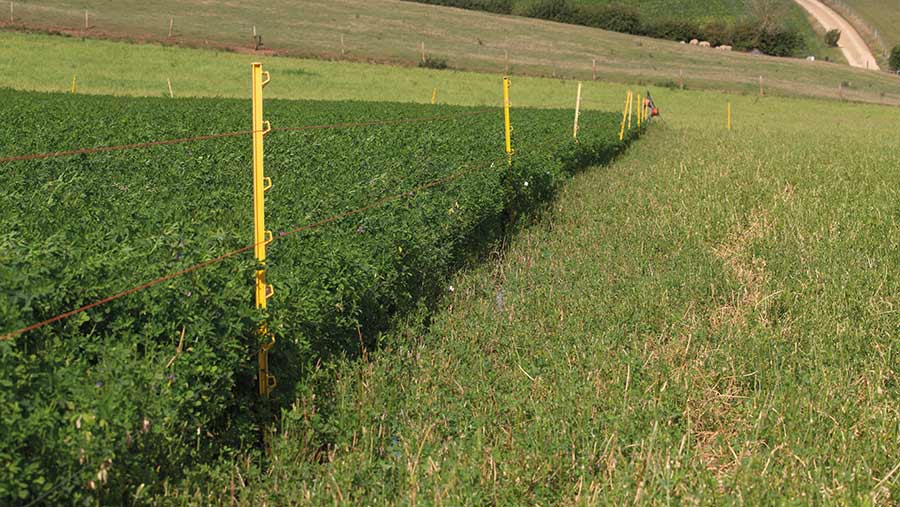 A rotation of 42 days was adhered to post weaning.

Lucerne is high in protein (22-23%) and doesn’t hold any salt, so sheep were given access to rock salt and hay to help balance the rumen and prevent bloat.

Twin-bearing ewe lambs have been compared to mixed-aged ewes that lambed at the same time on grass, clover, chicory and plantain.

“It’s been a ridiculous year. Conditions haven’t been as perfect as we would have wanted them to be,” admits Mr Cross.

In fact, grass burnt off in the summer and some of the ewes and lambs had to be moved to extra permanent grazing, which has made comparisons more difficult.

“Lucerne seemed to benefit the sheep themselves, but intriguingly that wasn’t expressed in extra milk production and growth in the lambs. We were both surprised,” Dr Genever observes. 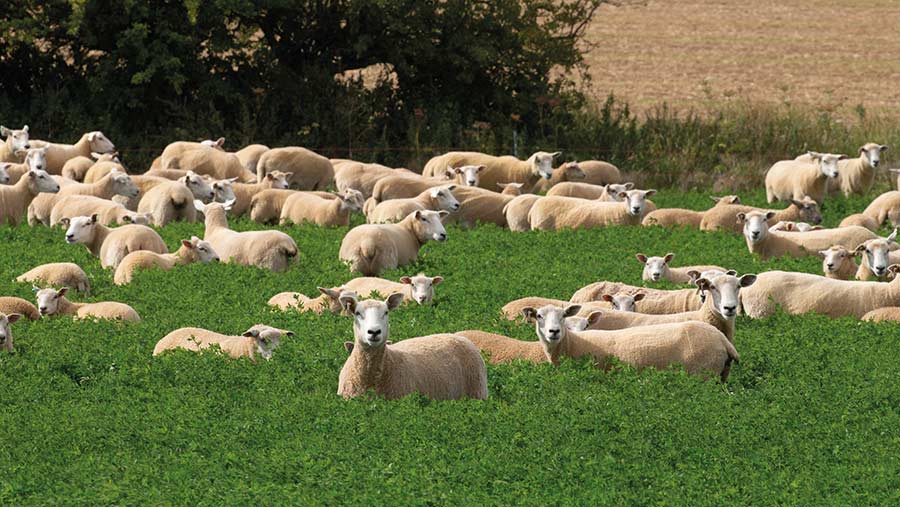 Sheep will be taken off the crop in September to allow it time to recover over winter.

“The target is to get 50% flowering once you’re into the autumn because that means the plant can put enough resources back into the root needed for strong spring growth the following year,” adds Mr Cross.

Next year, mixed-aged ewes will be grazed on the lucerne to make it a fair comparison.

Dr Genever adds: “It’s only one year and one trial, on one farm, so results need to be used with caution.

However, this year we have demonstrated lucerne can put condition on ewe lambs. Next year, we will try to show the benefit of lucerne on lamb performance and rearing rate.”

Mr Cross is also interested to see if rearing performance of ewe lambs will be improved as shearlings because they have weaned in better body condition.

To alleviate these two issues, Mr Cross is considering growing it with cocksfoot, which is very fibrous and has a similar growth pattern.

Strong and consistent growth despite the drought. During May and June (drought conditions), the plant used its deep tap roots to obtain moisture and continued growing, unlike the grass mix.