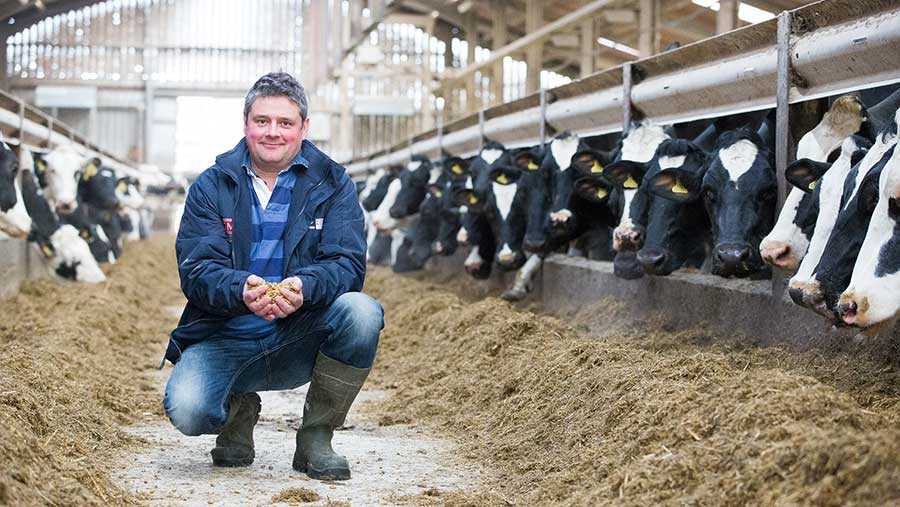 For Lockerbie farmers Gavin and Victoria Hamilton, incorporating nutritionally improved straw (NIS) into cow diets has helped buffer the rumen and boost the milk cheque due to increased butterfats.

Last summer, milk butterfats fell to 3.33%, resulting in significant penalties for the Hamiltons, who milk 300 cows at Hotts Farm in Dumfries and Galloway.

With the base milk price also at an all-time low, they were keen to tackle the problem head on.

On the farm’s Graham’s Dairies contract, a standard litre is 4% fat, with larger penalties for falling below 3.5%.

Having done the maths on the right balance between constituents and yields for his contract, Mr Hamilton was keen to push constituents back up to an optimum level.

To push milk butterfats back up, the farm’s vet nutritionist consultant, Will Tulley, from EBVC, suggested introducing NIS into the diet.

With the Hamiltons’ herd yielding 11,800 litres a cow a year and being fed a proportion of wet first- and second-cut grass silage of about 22% dry matter, NIS would help improve rumen health and constituents.

Mr Tulley explains: “In this herd, cows are being fed high levels of concentrate, together with wet silage, so there is little structural fibre. NIS provides

This is a good example of how NIS can help increase butterfats in herds where rumen function is challenged.

At Hotts Farm, cows receive a full TMR, with the forage component made up of 90% grass silage and 10% wholecrop.

Cows were traditionally fed 2kg a head of straw, which was processed in the wagon. However, the decision was made to incorporate 3.2kg of NIS per head into the diet and feed just 0.5kg of straw.

NIS levels were gradually increased, while the amount of soya hulls and straw was reduced.

Mr Hamilton says: “In an ideal world we wouldn’t need to feed any straw, but because last year was such a wet year and we have two very wet grass silages, we are still feeding straw to help keep the ration open.”

In recent months, rumen buffer has been removed from the ration, as the alkalinity of the NIS meant it was unnecessary. Soya hulls have also been removed.

Having experienced some sorting when feeding higher levels of straw, Mr Hamilton says NIS blends well into the diet and he has witnessed an increase in dry matter intakes.

Milk butterfats are currently 3.75% and Mr Hamilton says NIS has had no negative impact on yields.

He adds: “We definitely have fewer problems with the cows. Fertility is fantastic at the moment. That’s due a lot to the diet being toned back, but NIS must help with rumen health and cows looking well.

I’m absolutely delighted with what NIS has done. It’s cost effective as I’m getting improvements in butterfats and it’s saving me about £4,000/month.”