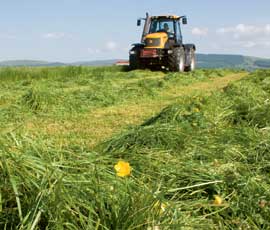 Speaking at the Grassland and Muck Event 2011 at Stoneleigh Park today (Wednesday 18 May), crop nutrition specialists, K+S UK & Eire said with grass yields already curtailed by as much as one third due to early drought, farmers hoping to get higher forage yields by forcing grass with nitrogen was not necessarily right.

“True, nitrogen is this is the single biggest producer of dry matter, but without the correct balance of other major nutrients such as potassium and magnesium, N-utilisation will be compromised,” said the company’s technical manager, Jerry McHoul.

“Potassium, in particular, is a key nutrient and one that must be applied to balance offtakes from first silage cuts. It plays a key role in efficient nitrogen use and protein building within the plant.

“However, at the same time potash aids water use and hence will be even more critical this year given low soil moistures and current crop stress. A crop of silage can remove 300-400kg/K/ha over the season,” he said.

As a result, Mr McHoul’s advice is to make sure you use an after-cut fertiliser that contains has a high potassium content and at the same time replaces the sulphur that has also been removed.

“Sulphur is the biggest single limiting factor required for the second cut, helping build dry matter and working with nitrogen to build protein.”

Mr McHoul said in recent seasons, Irish farmers who turned away from potash when prices peaked, have started using the nutrient again and have benefited from better silage quality and yield. “UK farmers should do likewise,” he suggested.