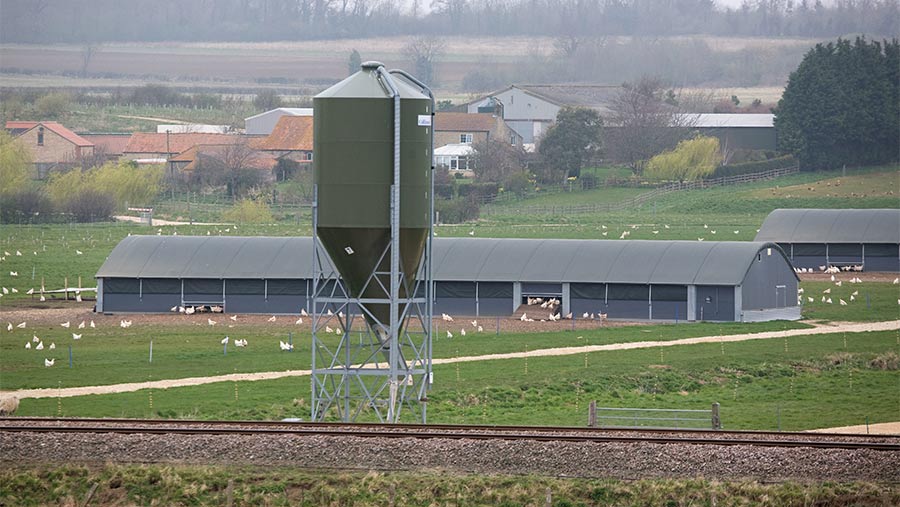 According to the British Poultry Council’s latest report, overall antibiotics use on UK poultry meat units fell by more than 80% between 2012 and 2018, to a total of 16.2t.

Producers’ attentions have instead turned to supporting flock health with feed additives to enhance their birds’ microbiomes.

Nutritionist Patrick Garland, of Premier Nutrition, and Martin Humphrey, of Humphrey Feeds and Pullets, set out some of the options and issues.

The key message for producers is to make use of the various tools available to help the birds look after themselves, says Mr Garland.

“Additives won’t do any good against a virus, but they can stabilise the digestive system and discourage negative bacterial population growth.”

Other enzymes include carbohydrase and protease, which can increase the energy available from feed, and break down storage proteins that bind starch.

Enzymes can be added to feed mixes or sprayed on post-pelleting, and are more intrinsically heat stable than in the past.

Many antioxidant molecules benefit bird health, from vitamin E to ascorbic acid and selenium. Some of these will be included in feed or vitamin mixes.

For example, compound feeds contain vitamin E – additional top-ups can be given to alleviate stress or disease, but must be fed in advance, not after the event.

Organic selenium-enriched yeast is a notable antioxidant that has proven benefits, especially in bone mineralisation and density.

It also allows for selenium transfer to meat and eggs, and has shown to improve shell strength.However, antioxidants do increase cost, so the benefit of adding to all feed will depend on individual farm problems.

Mycotoxin binders protect against potentially dangerous mycotoxins in feed, but they are not widespread in the UK market.

If there is a wet season, cereal bins have not been cleaned out, or there is a move to imported maize, then binders might be needed, especially for high-value breeding stock, ducks or turkeys.

However, there are hundreds of different mycotoxins so producers should test to identify which binders to use, advises Mr Garland.

Having a lower pH in the gut benefits “good” bacteria while hampering pathogenic bacteria – however additives have to pass unaltered through the gizzard, so it’s important to use protected acids which will pass into the gut and break down slowly, lowering the pH and aiding gut health.

Prebiotics are used in feed to encourage the growth of a particular group of beneficial bacteria and can be advantageous for those feeding for growth or egg production. “There is a huge range, from chicory to fibre products, which all act as substrates,” says Mr Garland.

“Although these are indigestible to the animal, they encourage the right bacteria population in the gut.”However, it’s hard to measure the benefits; plus a bird’s bacterial populations change as it gets older, meaning demands for the ‘right’ bacteria will vary.

Probiotics feed beneficial bacteria and can be fed throughout a bird’s life.These can be especially useful if birds have to be medicated, stripping out large populations of good bacteria. Probiotics can help re-establish a benign population.

Other natural enhancers may be marketed as feed additives but may not have regulatory approval, so producers should be careful.

Some are feed ingredients and have beneficial effects, such as essential oils. Beta glucans are another option, which come from different sources, including algae and yeast.

These help generate an immune response and allow for better uptake of vaccines.Short-chain fatty acids can aid gut health and improve shell quality, but again need to be in a protected form to release throughout the digestive system.

While there are many products that enhance gut performance and microbiome through optimising nutrient absorption, others are less effective.Knowing what types of feed additives are available means that producers can assess what their system might require.

“Trying to establish which additive to use is especially difficult when birds are not in a controlled environment,” says Mr Humphrey.

In addition, some products are only licensed for use in broilers, which can present a barrier.

Broiler systems offer the most consistent option, where feed additives can be tested against a control, in a short period of time, to determine the health and cost benefits. 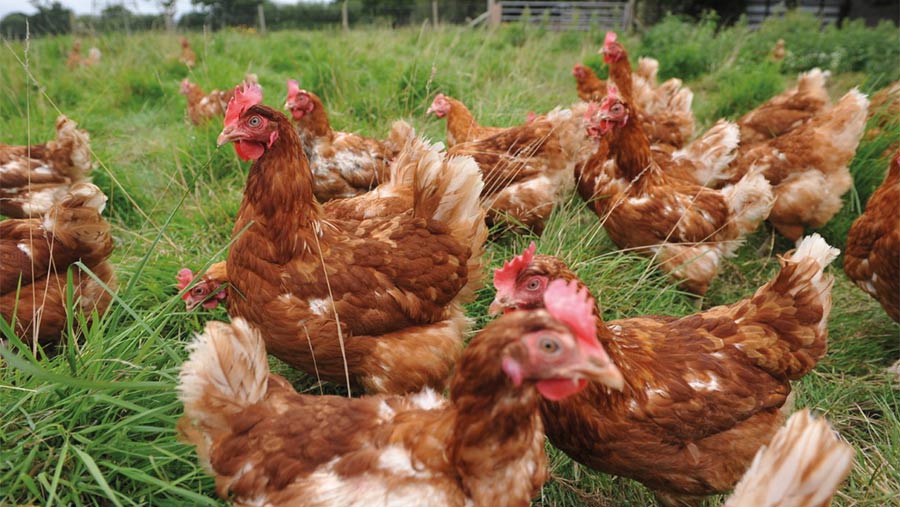 Start-of-lay targets at Fenemere Free Range Eggs, near Shrewsbury, were being missed when pullets were experiencing gut health issues.

“We were struggling with feed intakes when the birds first came in,” recalls Mr Gough, who runs a 96,000-bird free-range system with his wife, Sandy.

Poor intakes could have been the result of challenges experienced during rearing, warm weather, or due to the switch in the pullets’ diet or feed formulation when they arrived on farm.

Pullets were struggling to hit the correct bodyweight targets for producing the larger eggs required by the market. They were arriving at 16 weeks but not meeting the start-of-lay target of 18-19 weeks.

The Goughs mill and mix their own feed with grain from their arable unit. They explored options for introducing an appetite stimulant in that ration to increase intakes, specifically a product that could be added to feed rather than drinking water.

They opted for oil of oregano, a natural product which trials have shown protects gut health in poultry and other livestock.

Formulated from 100% natural essential oils extracted from the oregano plant, the additive is well known as an effective antimicrobial to aid digestion, nutrient absorption and immune function.

Since oil of oregano has been added to feed at Fenemere, feed intakes are at the recommended level and birds come into lay at 18 weeks.

It is included in the feed at a standard rate of 300g/t. This adds about £3 to the ration. If bird health is challenged, Mr Gough increases the quantity to 400-500g/t.