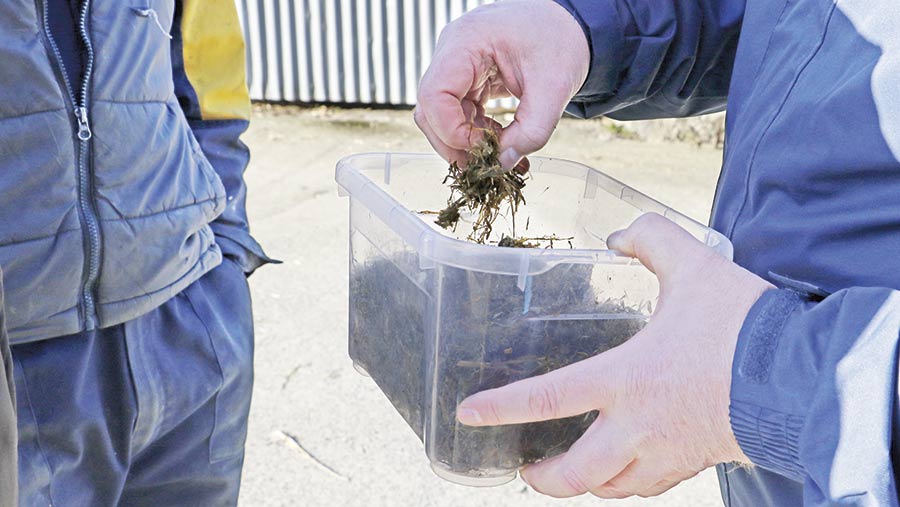 Farmers getting their forages analysed using NIRS (near infrared spectroscopy) could be getting a “poor deal” with investigations showing potential for major inaccuracies in some of the results being produced.

More worrying, this could have already led to some farmers over-feeding expensive protein sources this year as a result of labs underestimating true forage potential.

Speaking exclusively to Farmers Weekly, he said he found that while NIRS predicted the dry matter in line with wet chemistry analysis, it fell short when it came to sugar predictions.

Problems this causes on farm

In a farm situation, Dr Davies said this could equate to 60g more sugar being fed per day than the cow actually needs, which could lead to metabolic disease issues such as acidosis.

“There’s a lot of early-cut silage this year that’s not being rationed correctly,” he warned.

Dr Davies said the failing did not mean the NIRS technique was inferior, but was reflective of the databases labs used to predict the results.

These databases are based on historic chemical analysis and are then used to predict the quality of fresh silage samples submitted using near infrared spectroscopy techniques.

But, according to Dr Davies, unless these databases are kept up to date, it is difficult to predict silage quality accurately.

Dr Davies heavily criticised some datasets used by some UK labs for not keeping place with the marketplace. He said silage quality on some farms had improved drastically in recent years but databases had not.

“It’s not NIRS that’s the problem. NIRS is idiot proof providing you get the calibration right.”

He urged farmers to put pressure on companies carrying out testing by asking them more probing questions (see “What to look out for to ensure you’re getting a reliable result” below).

He added: “The more industry pressure that’s put on them the more they will have to come up with the goods.

“Things have to change because this technique should be good and it’s messing up rations.”

The Forage Analysis Assurance Group (FAA), which represents the companies carrying out NIRS lab assessment, said it was “disappointed” by the trial, which it said cast doubt on the validity of NIRS in the UK and was being aired publicly, rather than in a scientific forum.

“We understand the data have neither been published nor submitted to critical peer review. Without access to the data and the statistical analysis we cannot offer an opinion on either the rigour of the method or the validity of the results and conclusions drawn.”

The spokesperson said the group was “disappointed” the trial, which appears to be casting doubt on the validity of NIRS in this country, is being aired publicly rather than in a balanced scientific forum.

“With conserved forage representing a major proportion of dry matter intakes, accuracy of analysis is paramount to allow cost-effective diets. As a group, we are committed to enabling all of our members to undertake the most accurate analysis of the sample presented.

“Nevertheless, the biggest single factor affecting the accuracy of diet formulation on farm is the quality of the sample actually provided for analysis and the frequency of sampling.

“Unless the sample is a representative sample of the entire clamp face, it will never give a true reflection of the forage fed and as such accurate ration formulation will be difficult.

“Equally, the quality will vary throughout the clamp (different cuts, different fields, different swards, different weather) and so representative samples should be taken regularly and diets fine-tuned appropriately.”

The FAA said that numerous steps had been taken to ensure the validity of NIRS, including:

To determine dry matter, a sample will be placed in an oven at approximately between 80C and 100C until it is dry.

It will be weighed before placing in the oven and again after drying and the %DM calculated.

For pH a known weight of fresh silage sample will be added to a specific volume of water and mixed for a set amount of time depending on the exact method and then the pH measured with a pH electrode.

NIRS analysis involves shining NIR light at the sample. As a result the bonds between the molecules emit further NIR light, which is measured by the spectroscope.

At each wavelength an intensity is measured to give a profile. Then using chemometrics (mathematical models) a prediction of the analytes is made using samples that have previously been measured by chemistry and scanned by NIRS to build the relevant database.

The more samples of a similar type in the database the more accurate the prediction.

There needs to be enough samples for each individual analyte to be predicted and they have to be representative of the samples assessed.

For example, if all the grass silages in the database range between 18-30%DM and a grass silage sample of 50%DM was assessed, then the prediction would be less accurate compared with a 30%DM sample that was analysed.