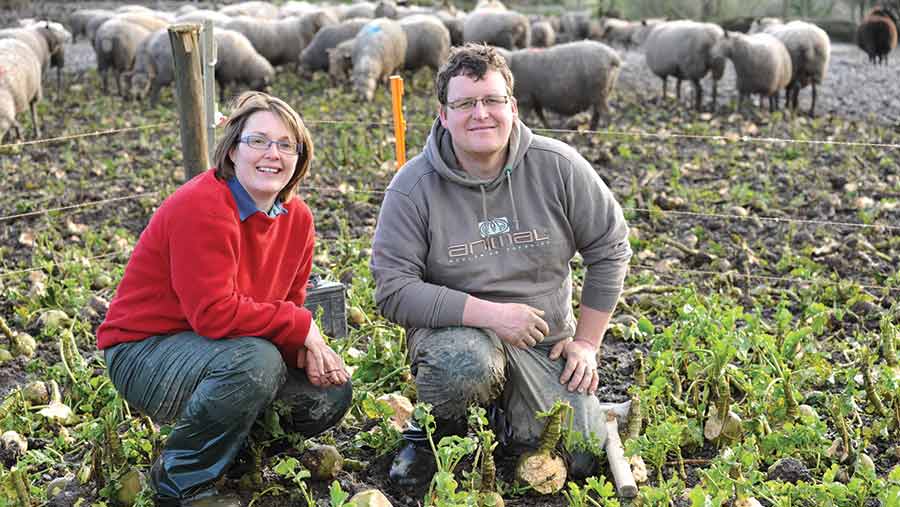 This year, Ben Anthony and Diana Fairclough reared 40,500kg liveweight of lamb by the end of September compared with 31,250kg in 2014, with similar ewe numbers.

This means despite disappointing lamb prices in 2015, their total income from sales has risen by more than £5,000.

To achieve these impressive figures, Mr Anthony and Ms Fairclough have introduced a number of changes to their system and key among these is improving ewe nutrition in the run-up to lambing.

They run a flock of 530 ewes at Frowen Farm, near Whitland, Carmarthenshire. The flock is made up of 300 Aberfield cross Tregaron Welsh ewes and 230 Texel-cross and Suffolk-cross ewes.

They also tupped 130 Aberfield cross Tregaron Welsh ewe lambs this year. The principle rams used are Abermax and Primera, but there are some Texel and Meatlinc tups too.

Traditionally, the ewe diet in the eight-week period before lambing had consisted of grass silage together with a good-quality but standard 18% protein concentrate, a liquid feed to prevent twin lamb disease at housing and mineral licks pre-housing.

With advice from sheep consultant Lesley Stubbings, the diet was changed to a 21% protein and high soya concentrate and a combination of red clover silage and grass silage. Liquid feed and mineral licks are no longer used.

The higher-spec 21% protein concentrate costs an additional £16/t compared with the traditional 18% concentrate normally used at Frowen, but less is fed.

“Concentrates with a high protein level do cost more per tonne, although this year protein is relatively cheap, so there is now no excuse. They enable the ewes to use the silage more effectively and improve colostrum and subsequent milk yields. In terms of value for money, this quality of concentrate is much better than cheaper feeds,” says Ms Stubbings.

“Farmers shouldn’t buy the first concentrate that is offered to them, they must make sure they are getting the right one for the job.”

Get to grips with forage quality

A first step to improving ewe nutrition is to analyse silage before feeding it. Establishing forage quality allows farmers to supplement only where necessary.

Weighing bales is important too, advises consultant Lesley Stubbings. “It is no good feeding what you might believe to be a 500kg bale when in fact it weighs 350kg. It is important to know how much bales weigh and what energy and protein they contain, otherwise you are going in blind.”

Choosing the right concentrate for ewes is vital. Ms Stubbings advises farmers to spend time on getting it right.

“Feeding ewes correctly ahead of lambing will give lambs a healthy start and ensure ewes produce sufficient quantities of good-quality colostrum,” she adds.

Lambs are also achieving more consistent finishing weights and specifications. “There were 147 lambs in the last group we sold and only two were out of spec,” Mr Anthony reports.

They continued to grow well, with average dlwg of 270g/day to slaughter, resulting in a 41.4kg liveweight average, or 19.45kg deadweight, with an average killout of 47% from forage.

“We have produced more lamb a hectare and even with the price as low as it has been, we have been better off financially,” says Mr Anthony.

A key to improving nutrition pre-lambing has been matching the ewe’s concentrate requirements to the nutritional quality of the silage.

“We have always had our silage analysed, but before we starting working with Lesley we didn’t know what to do with the analysis – we did what we always did. With her input we now know what to feed and when,” Ms Fairclough explains.

As the ewes get closer to lambing, red clover silage is introduced into the ration.

Ewes receive 200g/head of the 21% protein concentrate from eight to four weeks pre-lambing, 300g from four to two weeks and 400g from two weeks until lambing, although the exact quantity is always cross-checked to match the analysis of the silage being fed.

Nutrition has been a major factor in improving flock performance, but so too has the decision to lamb a month later and use teaser rams. Previously lambing started on 1 February, but with Mr Anthony and Ms Fairclough’s emphasis on improving productivity from grass, lambing now kicks off on 1 March.

This has not only reduced supplementary feeding costs but lambs are being finished quicker too.

This is the second year that all of these changes have been implemented at Frowen. In 2014 ewes were also condition scored periodically throughout the year.

“All the changes together have had a huge effect on their business,” says Ms Fairclough. “There is not one magic answer but a combination of ewe nutrition and condition and grass management.”

Lambs are sold to St Merryn Meat and Dunbia. By the end of September, all the lambs had been sold apart from a group of 184. This is one area of the business Mr Anthony and Ms Fairclough plan to improve.

“The majority of the remaining lambs were on rented ground, which is deficient in cobalt, so we will have to address this issue,” says Mr Anthony.

“We would like to improve on what we are doing by getting all lambs away by mid-October. Fortunately the cost of keeping this group hasn’t been too high this year because they have been on grass all summer and it has been a good autumn.”