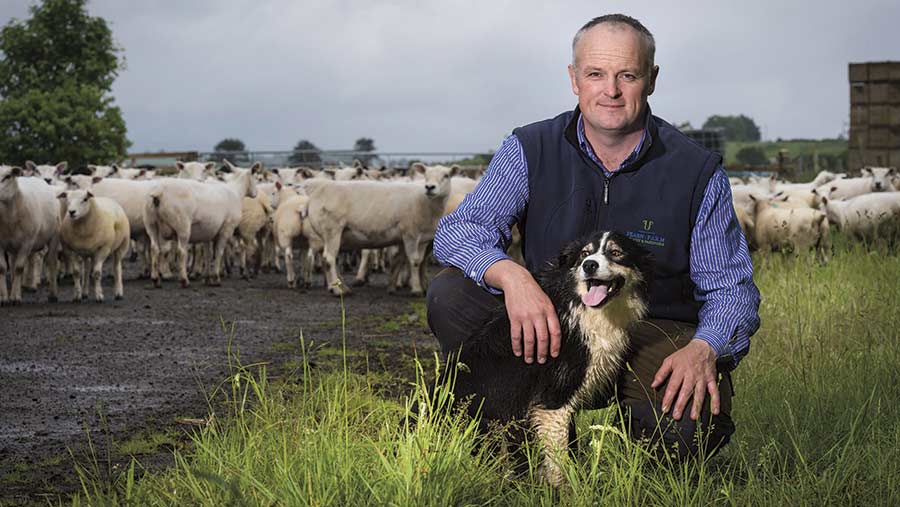 This year livestock farmer John Scott decided to increase the amount of forage crops he grows from 20ha to more than 100ha, which he hopes will add value to the farm business.

Fearn is the base for the family business, which covers several farms in Easter Ross and Sutherland. Total livestock numbers sit at 4,500 ewes and 220 head of native bred cattle, which have traditionally been wintered on silage, feed barley and other by products such as straw and draff.

Feeding ewes a barley-based diet through a snacker on a daily basis was labour intensive, time consuming and was damaging the grass, causing Mr Scott to consider a new approach.

“If we are going to pay a contractor to grow a crop, I would prefer to utilise it in situ, it makes economic sense, our aim is to reduce the need for mechanical operations.

“We would normally feed out in the stubble fields when dry enough and on grass, but increasing rainfall and resulting compaction is making this more difficult on heavy land. The plan now is to get as much stock behind the wire so we can rest the heavy ground and ease labour,” he says.

This year Mr Scott is growing a total of 124ha of forage crops across four areas of the farm.

This will consist of fodder beet, swedes, swedes/turnip mix, stubbles turnips, which will go in behind winter barley, and forage rape/Italian ryegrass to provide an early bite in the spring.

Mr Scott has been able to establish the crops on land he recently took over next door, which is dry and free-draining and has part of an old runway on it, which gives a useful dry lie back area.

Fields were soil sampled to make sure they had a pH of 6.5 or more, which is required for fodder beet before being ploughed, worked, fertilised and precision drilled.

Some good weather along with a two-spray programme has resulted in some decent crops being grown.

Ten different varieties have been trialled, each with a range of dry matters and yields. Stock performance will be monitored before varieties are chosen for 2017.

How the feeding will work

Various classes of sheep and cattle will strip graze the crops separately this autumn and winter.

Usually bull calves would be left entire and housed for finishing, on a bruised barley/oats and dark grains ration, but this year they have been castrated and are running with the heifer calves on fodder beet outside.

“We will have to supplement with a bit of silage, but the aim is not to be carrying feed bags into the field,” he says.

More than 8,000m of electric and semi-permanent fencing has already been erected on the new farm with temporary reels used in-between.

How forage crops are adding value

Mr Scott hopes by resting the grazing pastures over the winter it will encourage a good early spring regrowth.

In order to take advantage of the spring regrowth, Mr Scott has pushed back lambing by two weeks, so the stud flock will be lambed in mid-March indoors, followed by the commercials in April.

Establishing the crops has been a big outlay, but Mr Scott hopes the investment will be worth it.

“Keeping animals outside over the winter will hopefully add value to our business,” he says.

“By not spending so much time feeding up and mucking out I’m hoping we will be able to spend more attention on what we are doing, getting stock in right condition and pulling them out at the right time. We are running a labour unit light anyway, so hopefully this will help,” he says.

The dung will also be spread directly on to the ground rather than the workforce having to muck out and spread it, which will also save time.

And by resting the grass over the winter, Mr Scott hopes he will be able to add value to the grass by growing better grass and getting a good strong re-growth, which will aid outdoor lambing.

We will revisit Fearn Farm in 2017 to report on how well the forage crops and livestock performed.