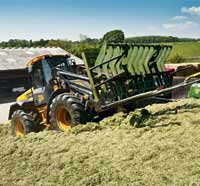 Silage time can be aptly described as nothing more than bacterial warfare, according to DairyCo extension officer, Chris Duller. “Producing high quality silage relies on encouraging a healthy population of beneficial bacteria in the clamp for a rapid and stable fermentation. This fermentation helps preserve protein quality and prevents the formation of protein breakdown products like ammonia,” he says,

However, there is often a significant population of “bad” bacteria, such as coliforms and clostridia, which, given an opportunity, will disrupt the fermentation, adds Mr Duller. “This raises the pH and lowers the nutritional quality of the silage as well as reducing intake potential.

“Nevertheless, bacterial populations can double every 20 minutes in the right environment, but it is essential you keep out as many of the bad bacteria as possible – and through good consolidation and sealing, create conditions in the clamp that favour the good bacteria,” he says.

The fight against “bad” bacteria begins in late winter/early spring with both slurry spreading and dead grass giving them an opportunity to enter the silage ley, explains Mr Duller. “The cold and dry conditions of February and March have left many silage leys coated in dried on slurry and with a mat of dead material in the sward base. Those with dilute slurries, low application rates or using injectors will be one step ahead of the rest in the fight against the bad bugs – as will those who were able to remove some of the dead material with either sheep or an early grazing rotation.”

Soil contamination will also be another entry point for the bad bacteria. And controlling moles is also something Mr Duller suggests should be a priority, otherwise rolling will be required to level them off.

Cleaning clamps thoroughly is also important, he says. “Steam cleaning may sound extreme, but it is really effective. Use new side sheets for the clamp, and when there is silage remaining in the pit make sure you sheet up against it.”

At harvest, when conditions are wet, Mr Duller suggests raising the cutting height to try and reduce soil contamination. “Every time swaths are moved there is a risk of rakes bringing in soil. It is vital they are set correctly and it is really a job for an experienced driver rather than the student.”

Additives are also something that should be considered and as Mr Duller explains are “one of the biggest weapons in your armoury”. “Additives are designed to help dominate fermentation with beneficial bacteria, to drive down the pH and stop the bad bugs in their tracks. While bug numbers in additives are important (target those that supply 1m bacteria for every gram of forage) it is important they are also the right strains of bacteria.”

When mixing an additive with tap water filling the drums the previous day and letting them stand overnight before adding the additive, is also advised. “This allows any chlorine in the water supply to disperse. Also read the labels carefully as to how you store any left-over packets as some can be frozen, others definitely not,” he says.

Some additives also include stabilisers designed to reduce heating and mould development at the clamp face. “These stabilisers are sorbate salts, the same as those used in food industry; they are particularly useful with high dry matter silages and are certainly worth considering when you have a very wide clamp face. And remember, without using an additive you are trying to second guess the natural population of bacteria on the grass – it may be lactic acid bacteria dominant or it may not,” he says.

Additives will be most cost effective where silage quality and clamp management are good. Research has consistently shown returns on investment are about £5 for every £1 spent on an effective additive. “Additives are not going to transform a really heavily contaminated and poorly consolidated silage into rocket fuel, but they will certainly give you the edge in a year when the bad bacteria have got off to a great start.”