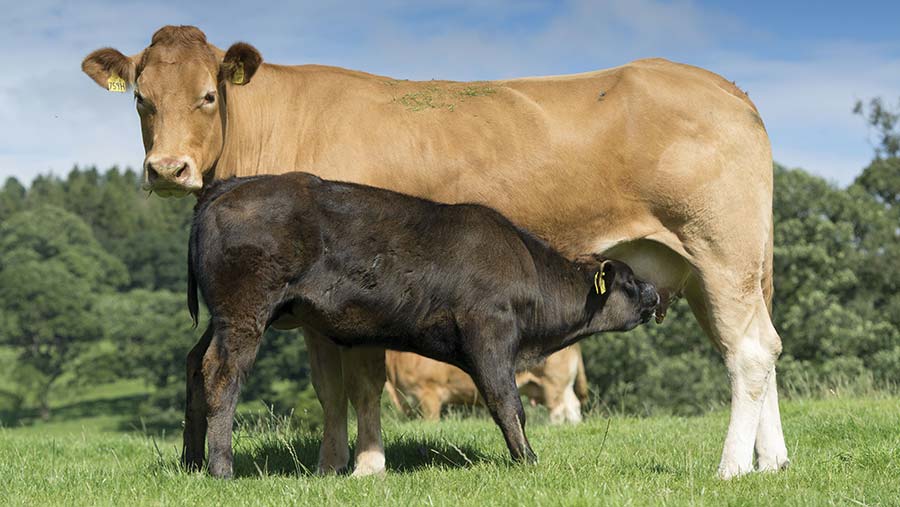 Weaning can be a stressful experience for a cow and calf, breaking the maternal-offspring bond and removing milk from the calf’s diet.

However, there are strategies beef producers can take to reduce the effect on performance.

Simon Marsh, principal lecturer and cattle specialist at Harper Adams University, says the first rule of weaning is that there is no optimum age – some calves can be weaned at five months, others as late as 10 months.

“Total flexibility is needed. Age at weaning needs to fit into your own system and it really depends on cow condition,” he explains.

If the cow is lean, weaning early will allow her time to recover and gain condition. If the cow is overconditioned, weaning can be left until later.

Mr Marsh says the ideal is condition score 3-3.5 at housing and 2.5 at calving, so age at weaning should be dictated by those parameters.

“If it has been a poor grass-growing year, you might want to wean earlier because it takes the pressure off the cow.”

Removing a cow’s lactation requirement earlier will also allow her to carry more condition into autumn and winter, reducing cow maintenance cost, because she will need less winter supplementation.

If increased body condition is maintained through winter calving and breeding, this could have a positive effect on conception rates.

Weaning early: effect on calf and how to reduce stress

For the calf, weaning stress can result in reduced liveweight gain, a marked increase in physical activity, including pacing and calling, and a reduction in the time spent feeding during the post-weaning period.

Abrupt weaning will compound this. Therefore, it is worth considering pre-weaning tactics such as fence line separation or anti-suckling devices such as nose flaps, says Mr Marsh.

For fence line weaning, separate cows and calves on either side of a fence for four days or more before separating totally.

“This allows the cows and calves to still see, hear and smell one another and where possible have nose-to-nose contact,” says Mr Marsh.

A recent study carried out by Harper Adams University and funded by AHDB Beef & Lamb showed at 11 days after weaning, calves fitted with nose flaps to prevent them suckling their dam had a greater liveweight gain compared with the abruptly weaned calves.

“Despite not being significant, this suggests a reduced growth check at weaning compared with the abrupt weaning method,” adds Mr Marsh.

1. Avoid housing and weaning calves at the same time to minimise the number of stressors they are exposed to at any one time. Instead wean two to three weeks before housing.

2. Introduce creep a minimum of four weeks before housing because a calf’s ability to covert feed is at its highest at that point – every 120kg of feed is converted into 40kg of liveweight gain.

It also means that at weaning the calf will be used to hard feed. The only exception might be native breed heifers because they will lay down fat and they also finish later than other breeds.

3. Do not dehorn or castrate a month before or after weaning to minimise stress.

4. Graze calves purchased weaned at market for two to three weeks before housing in a well-fenced and sheltered field.

5. Vaccinate against pneumonia and clostridial diseases before housing.

6. Clip a 30cm wide strip from the calf’s back to prevent sweating.

7. Treat for internal and external parasites with a clear anthelmintic and treat for fluke if needed.

8. House in well ventilated sheds with plenty of straw and avoid a dusty environment.

9. Stocking density should be double the normal space requirements – 2-3s square metres per 100kg of liveweight instead of the normal 1-1.5.

11. Avoid mixing groups of calves because of the risk of disease spread if they come from different disease backgrounds.

Weaning up to three weeks after housing when calves have adapted to their new environment curtails growth checks in the cattle Robert Hartley takes through to finishing.

Although daily liveweight gains (DLWG) are slow in the week Mr Hartley removes calves from their mothers, performance reverts within a month, at which point bulls are recording DLWG of 2.5kg.

Mr Hartley, who farms in partnership with his son, Peter, puts this down to weaning at a point when calves are well adjusted to their new environment.

Consistency in their diet is important too, he says. 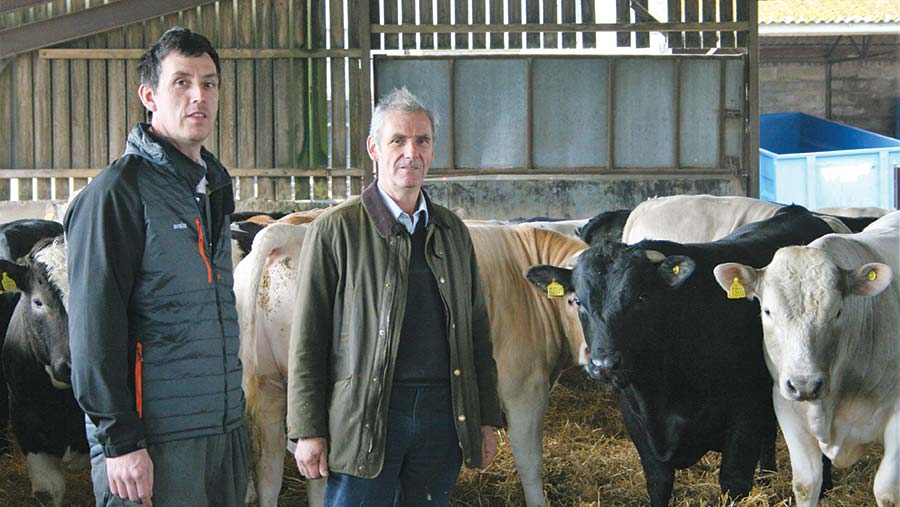 Cows and calves are turned out to grass after calving from mid- to the end of April.

Calves are first given creep at grass in metal creep feeders from three months old. They also receive this ration in the first few weeks at housing.

“Not all of them take it, but it is there if they want it,” says Mr Hartley.

Calves are at grass until the end of October, when they are loose housed with their mothers. At that point, they are wormed and vaccinated for blackleg.

“They stay with their mothers for two to three weeks while still having the creep, as well as silage,” Mr Hartley explains.

“We weigh every month and at weaning. We noticed the growth weights drop a bit in the first week, but it doesn’t take long for them to get back on track,” says Mr Hartley.

He has used nose flaps in the past but didn’t rate them, because they came off in more than one-third of the calves.

“It was probably because they were in and out of the feeders,” he says. “We did notice that those that did retain them were quieter at weaning, so if we sold our cattle as stores, we might have given them another go.

After weaning, bulls and heifers are separated and receive ad-lib rations of home-grown barley, soya, molasses and straw.

Bulls finish at 600kg and heifers at 500kg, with all cattle sold at Bridgnorth market.