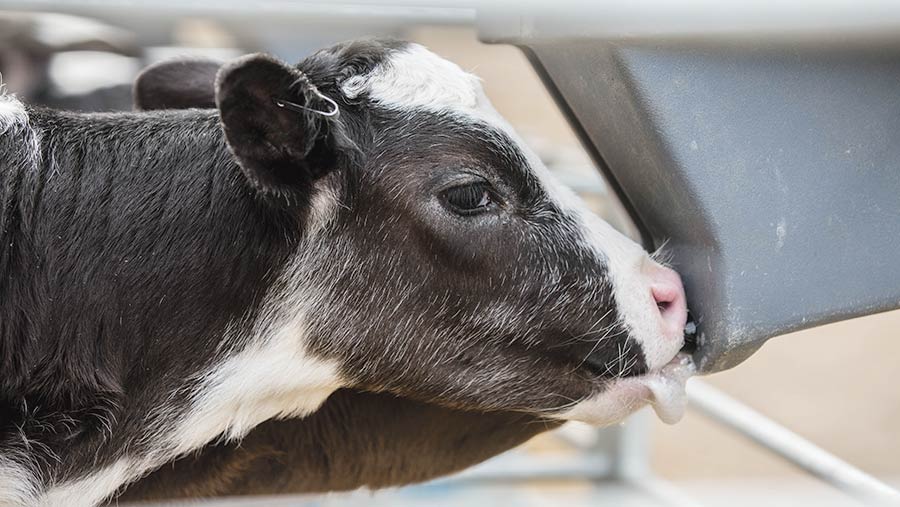 How the trial worked

In both groups milk rates were reduced to one feed a day, consisting of 1.25 litres of milk by weaning at day 42. All calves were offered ad-lib 18% CP early weaning concentrates, water and straw, before moving into group pens at weaning.

Despite the fact feed costs increased by 5p/kg LWG on the higher rate of powder, there was actually a cost benefit of 24p/kg because of improved health, with weaning costs falling from £1.66/kg LWG to £1.42/kg (see tables).

Only two calves fed 900g required treating for disease, compared with six calves in the group fed the lower rate of CMR, lowering overall treatment costs from £4.59 a calf to just £1.55 a calf.

“This increase in feeding costs to 12 weeks would be recouped by valuing the extra 5.6kg liveweight gain at £2.13/kg.”

Mr Marsh says the reason calves fed the higher rate of powder were healthier and showed improved coat bloom scores was possibly that their immune status was better.

He says the study could be replicated in dairy heifers, adding: “The approach has always been to minimise milk powder because it is expensive. But across all the calf trials we have done, calves recording lower DLWGs never catch up.”

Therefore, he says, it is worth capitalising on the efficient, early growth phase.

Mr Marsh will next monitor subsequent bull performance and investigate whether the calves fed higher CMR will be slaughtered earlier or finish at heavier weights.