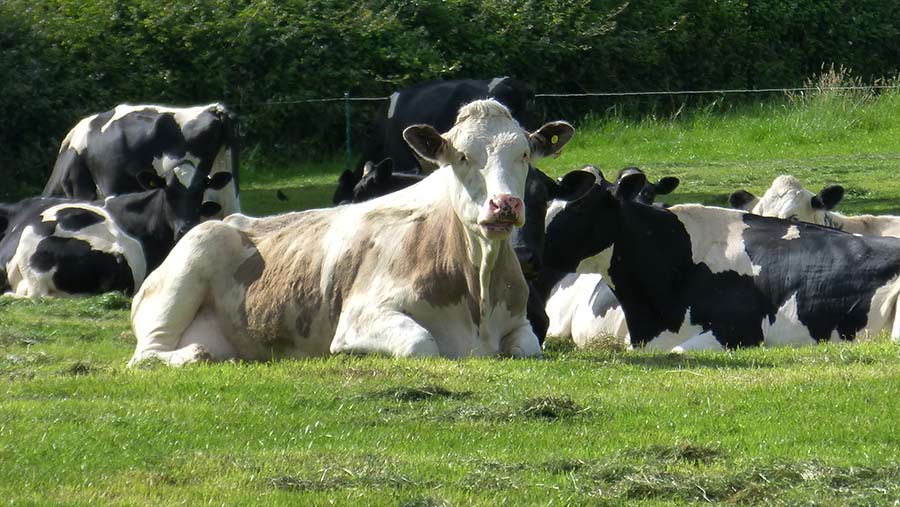 Producing quality silage and block calving in the summer are allowing a Gloucestershire dairy to hit a margin over purchased feed (MOPF) of £1,656 a cow (27p/litre).

The crossbred herd of Rob, Enid and Oscar Seex of Whitley Court Farm, Upton St Leonards, is consistently producing 75-85% of its milk from forage at a feed cost of just 1.8p/litre.

Furthermore, by calving in a 12-week summer calving block, the farm is maximising its contract value by targeting the seasonal milk payments offered by its milk buyer, Wyke Farms.

See also: How farmer gets 11,000 litres from grazed Holstein herd

Concentrate use was just 0.11kg/litre last year, which was made possible with a range of good quality homegrown forages. In 1995 and again in 2011 the farm produced more than 5,000 litres a cow from forage.

Concentrate feed is supplied in a blend fed in a total-mixed ration with grass silage, maize silage and wholecrop wheat grown on the farm.

The blend is currently made up of soya, biscuit meal and rapeseed, which Rob sources himself.

“I quite like watching the markets online and looking at trends and then ordering it as and when to try and get a blend that will work,” says Rob. “We have no parlour feeders, it’s just added into the mixer wagon.”

This approach has kept the cost of concentrate in the ration to about 2p/litre for the past 15-20 years.

Total concentrate use per cow totalled 0.659t last year at an average concentrate cost of £170/t.

Early advocates of a multi-cut silage system, the Seex generally take five cuts of grass silage most years and six cuts are sometimes managed. This year the first cut was taken on 21 April.

A normal year sees first cut taken around 1 May, with cuts taken into October some years.

All harvesting work is done by a local contractor. The farm has a mower and grass is always clamped by Rob on the buckrake, to ensure the clamp is compacted evenly.

All the grass silage goes into one big clamp, and, depending on pit space, sometimes wholecrop goes in too. Cows get the best silage, calves get the next best and heifers get the third-choice feed.

High-sugar grasses are used with high D-values to produce a quality silage for the cows.

The ration is fed in two troughs, a narrow 20cm one and a wider trough (1.5m) that is accessible from both sides, meaning intakes can be ensured without doing push ups.

A plastic sheet lining was fixed to the larger trough 10 years ago which has proved to be less sticky and means cows can clean out the trough easier.

Cows are normally housed in late November and start going out during the day in January where possible.

The herd is usually out full-time in mid-February or early March, although this is hugely dependant on the weather.

“There are no hard and fast rules,” Rob says. “This year they were out for nine days in January, which is impossible some years.”

The herd strip grazes 1.2-1.6ha blocks, with one strip typically allocated per milking.

Every paddock is pre-mown through the summer to maintain pasture quality. There are no strict rules, but paddocks are pre-mown once or twice.

Grass is typically cut up to two days ahead of the cows. However, because the farm is on the edge of the Cotswolds, some fields can’t be cut.

“The higher fields aren’t mown,” explains son Oscar. “They are steep and stony and we don’t want to damage machinery.”

A possible 11.8p/litre price differential is paid by the processor to penalise spring litres and reward late summer and autumn production.

Seasonal bonuses go up to 4.8p/litre in the autumn and drop to a 7p/litre deduction in the spring. Last year the farm’s milk price peaked at 32.79p/litre in October and had dropped to 26.5p/litre by May 2019.

To avoid penalties and secure bonuses, the farm calves for 12 weeks from mid-June into September and pushes the cows through the summer and into the autumn to produce more milk.

Cows are buffer fed through the year but graze grass only from 1 April to mid/late June. Concentrate rates are increased steadily from around 2kg a cow/day in July to a maximum of 3-4kg a cow/day from August until housing, when it starts to drop and is usually around 1.5kg by the end of January.

This summer, in addition to concentrates, cows are being supplemented 12-15kg of maize silage and 1.5kg of SugaRich and rapeseed.

With the farm drying off and cows calving at the height of the summer, mastitis and flies could be problematic, Rob says.

A close eye is kept on cows and pour-ons are used through the summer. All cows are teat sealed and only about 20% of cows are given dry cow antibiotic tubes.

Every dry cow and in-calf heifer has Stockholm tar applied to its udder on Fridays between April and October.

Cows are typically dried off on a Tuesday for three days inside on straw and are turned out on rough grazing.

From three weeks prior to calving cows are brought to fields close to the farm and receive 100g of magnesium chloride, 100g of dry cow mineral and 0.75kg of wheat distillers and maize silage and straw a day.

About 20% of cows are given a calcium bolus to help them through calving. As a result, milk fever cases are rare.

Tips on increasing milk from forage