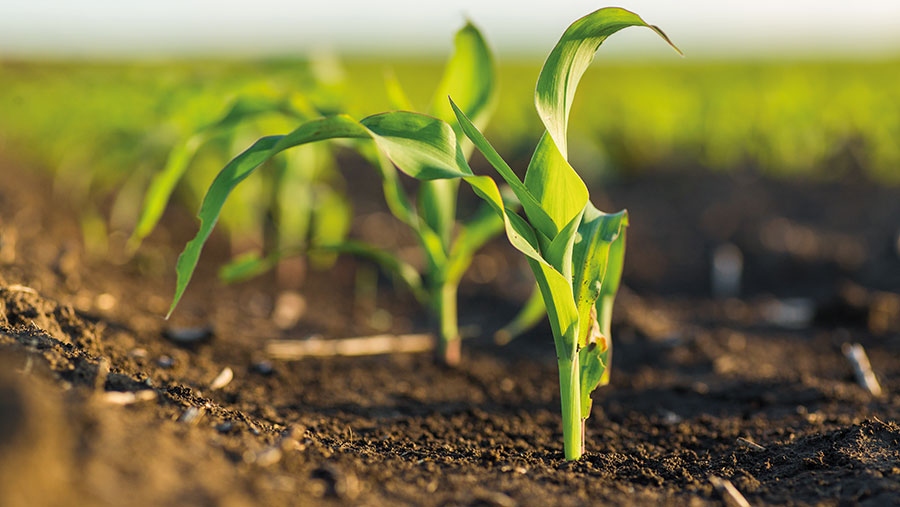 About 180,000ha of maize is grown in Denmark, with the majority of production concentrated in the South West. However, continuous rotations and a reduced chemical armoury mean weed control is a significant issue for growers.

Below, Jens Erik Jensen, senior adviser at the Danish Agricultural Centre, sets out some of the key weed issues and explains how a chemichanical approach – a mix of chemical and mechanical control – is providing an effective solution.

See also: How one Devon farmer is succeeding with strip-till maize

The main issue with the crop is the intense rotations, explains Mr Jensen.

“Many fields grow continuous maize year after year. We carried out an analysis in 2020 which showed that 68% of all Danish maize fields were grown with no break crops in-between.”

This has resulted in significant weed control issues. The challenge is made worse because only a few herbicides are registered for use in maize.

This means there is an over-reliance on what is available, explains Mr Jensen. “Specifically, ALS-inhibitors and mesotrione are used in every single conventional field,” he says.

Other products licensed include fluroxypyr for redshank and bindweed control, and benzatone for cranesbill. Pyridate is available but has limited use.

Diflufenican has a minor use registration for pre-emergence use on speedwell species, and glyphosate is also employed across many farms to clear fields.

The combination of these two issues means that in many fields, grassweeds such as cockspur are very problematic – almost overgrowing the maize in some cases.

The 5×5 rule for maize conservation

When inter-row hoeing is used, it is important to follow the “5×5 rule”, says the Danish Agricultural Centre’s Jens Erik Jensen.

This guidance was formulated by the centre’s advisory committee to optimise maize production and prevent weed control failures.

The five rules are:

The solution: Inter-row hoeing and a chemichanical approach

Mechanical weed management in maize is very common in Denmark, explains Mr Jensen, and practised in most fields.

This is nothing new: there is a high percentage of organic maize grown in the country, so producers have been incorporating mechanical strategies for a long time, he says.

The main components of weed management in organic settings include:

“However, with all of these approaches, the correct timing is extremely important for success, as there is not the fall-back of chemicals for organic growers,” says Mr Jensen.

For conventional systems, though mechanical weed control provides good results, that does not mean there is not a place for chemistry, where appropriate, he adds.

As such, a chemichanical approach is often practised – a blend of chemical and mechanical weed control.

The efficacy of both solely mechanical and chemichanical systems has been tested in recent trials carried out by the Danish Agricultural Centre.

In an inter-row hoe weed control efficacy trial on five Danish maize fields, researchers looked at the response of carrying out one, two or three passes with an inter-row hoe.

“Two passes were found to be optimal for weed control,” explains Mr Jensen.

Again, timing is important with this approach to avoid weeds becoming too large to remove with the hoe.

Danish firm AgroIntelli launched its Robotti robot in the UK at Cereals 2021. Jens Erik Jensen, senior adviser at the Danish Agricultural Centre, says this is an example of how advances in technology could benefit maize weed control.

“It can be used for carrying out more or less all of the operations in the maize field – from sowing to weed management, and even fungicide applications,” he explains.

The Robotti can be easily adapted to work as an inter-row hoe, mounted with a spray boom, or used to sow crops, making it a very versatile investment.

It is also capable of field mapping. Key benefits of the technology include:

A Suffolk vegetable grower has been the first farm in the UK to adopt the technology. Find out more. 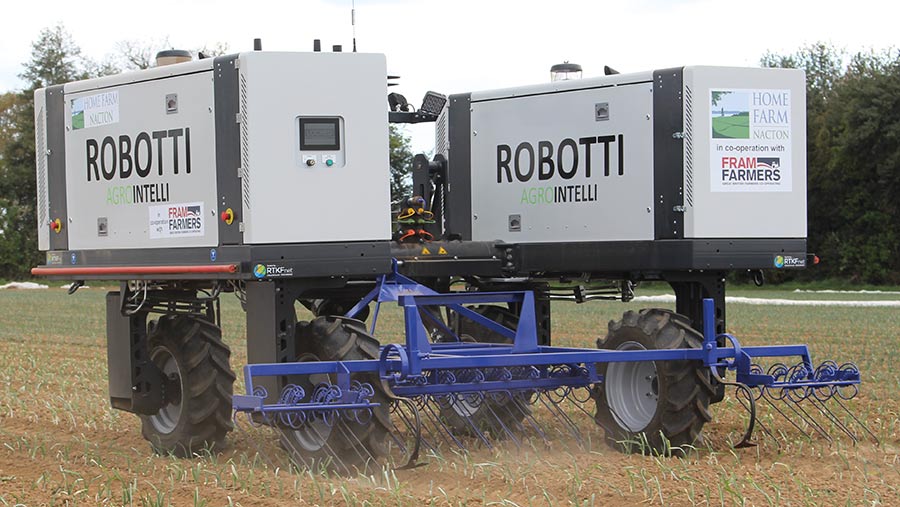