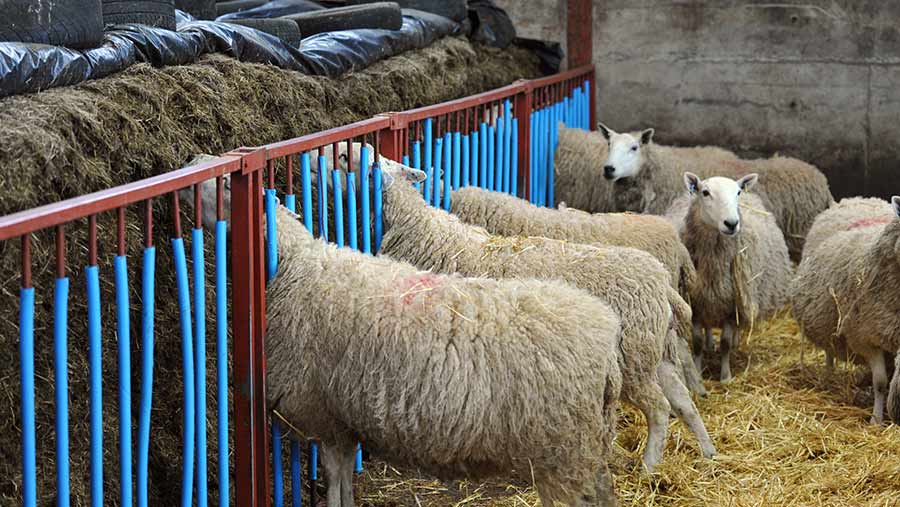 A Welsh upland farm has slashed the number of prolapses at lambing by 75% since introducing a self-feed silage system for pregnant ewes.

John Parry put the system in place at Goitre Farm, near Kerry, Newtown, after seeing it in operation on another farm.

Mr Parry claims it has reaped multiple benefits including reducing labour requirements and takes just 15 minutes to move barriers to give ewes access to feed.

How the set-up works

Mr Parry had a large lambing shed that lent itself to modification so he set about making feed barriers to run along two sides of an 80 x 40ft silage clamp positioned in the centre on one side of the building. 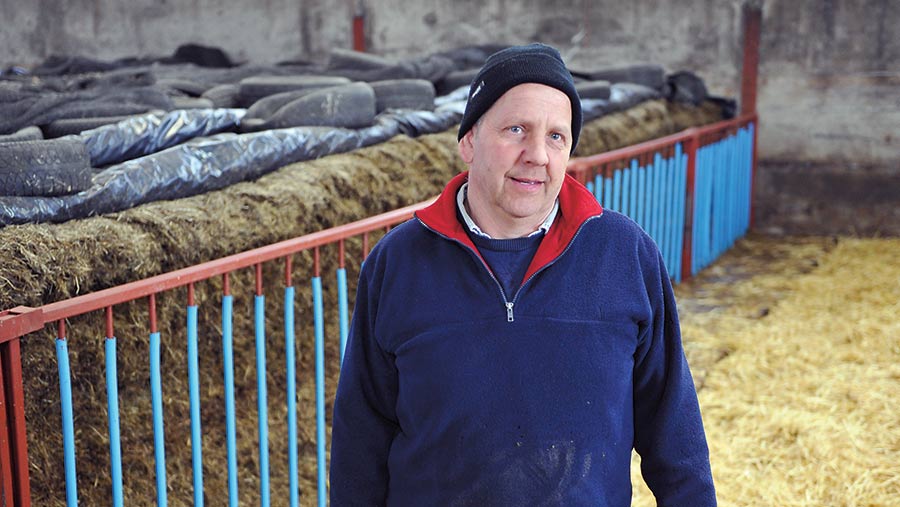 The L-shaped barriers have vertical metal rods, set 6in apart to allow ewes to comfortably move their heads in and out.

These rods are covered with alkathene pipe to prevent the metal from catching on their wool fleeces; these have the added benefit of rotating to further protect against rubbing.

Around 140t of silage is ensiled, with the clamp height set at 4ft to prevent the silage being pulled out at the base and risk the face collapsing.

“Sheep can’t eat higher than this,’’ Mr Parry points out.

The silage is covered with a double layer of plastic wrap topped with netting and tyres to prevent vermin accessing it. The clamp must also comply with silage slurry and agricultural fuel oil (SSAFO) storage regulations.

Once opened and ewes start eating the barriers are pushed forward 2-3in, mostly once a day but occasionally twice.

Ewes are housed 10 weeks before lambing, with triplet-, twin- and single-bearing ewes run as one group of 500 for the first six to seven weeks.

At 10 days before lambing, the shed is divided in two to allow the triplets and singles to be removed from the self-feed system.

This enables preferential feeding of the triplets and for intakes to be restricted in the singles.

For these groups, silage is removed from the top of the pit with a shear grab and fed in troughs in a yard alongside a 19% protein blend.

The blend includes high levels of soya and maize, balanced with oats, wheatfeed, beet pulp and yeast. Ewes carrying triplets are fed 0.68kg a head a day at the point of lambing, twins 0.56kg and singles 0.45kg.

“Ideally we would feed rolls on the floor but we can’t get the specification we need in roll form,’’ Mr Parry explains.

He describes the flock’s performance on the self-feed system as “faultless’’.

“We have seen a huge drop in the number of ewes with prolapse because they don’t gorge on the silage, it is always in front of them.

“It is no different to foraging, they have to work to pull the silage out of the face, and there is no waste.’’

Mr Parry says labour savings are significant compared with providing fodder in a feed passage, and he should know as he has a second shed housing 400 ewes with a conventional feeding system in place.

Making pit silage instead of big-bale silage is another cost saving, he adds.

He is considering adapting the second shed too but cost has been a factor in moving forward with this plan as the shed would need to be extended. Instead, these lambing ewes move into the self-feed shed as the earlier lambers are turned out.

“As soon as we have the room we transfer them to that shed,” explains Mr Parry.

His biggest challenge is towards the end of lambing when only a few twins are eating from the face but, if needed, the silage is removed and fed to the beef herd.

“The face has to be big enough to have adequate feeding space for 500 in the first six or seven weeks but not too big that the silage will go off when only the twins are feeding,’’ he says.

“They are slower eating the silage, even slower if the silage is too dry. In those situations, the face can go off.’’

Mr Parry aims for a dry matter of 25-28%, harvesting silage for the sheep in one cut at the beginning of June when the grass is still young and of good quality. At the end of that month a second crop is cut for his herd of 65 suckler cattle.

“For ease of management I would have had the shed big enough to have two silage pits instead of one because this would allow us to keep singles and triplets separate for longer but still on the self-feed system.’’

Advice for other farmers considering switching to self-feed silage