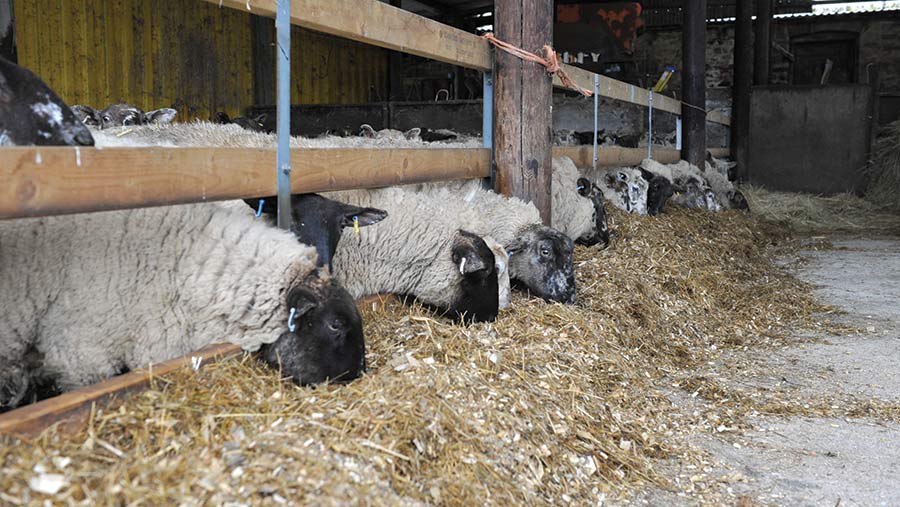 Feeding a 50:50 ration of grass and maize silages to pregnant ewes three weeks before lambing is improving their ability to produce milk.

Home-grown maize silage is fed to the 500 Mule ewes at Bryn Farm, near Cowbridge, when they are housed before lambing.

“The maize makes the ewes very milky,” says Owen Rees, who oversees the sheep enterprise and farms with his father, Ed, his uncle, Robert, and cousins, David and Tom.

Why did they switch to feeding maize?

The business is largely self-sufficient in feed, growing 10ha of maize and up to 16ha of spring and winter barley.

The maize had been grown as feed for the 120-cow suckler herd, and was introduced into the ewe diet two years ago when the family were seeking an alternative to energy blocks.

“We were using the energy blocks to balance the grass silage and hay the ewes were getting, but they were costing us about £25 each and we were getting through two pallets of them,” Owen calculates.

See also: All you need to know about feeding sheep a total mixed ration

With limited feed space, the blocks were positioned in ring feeders in a yard adjoining the housing.

“The blocks were expensive. We never knew which ewes were taking them and we were getting a lot of cases of twin lamb disease,” Tom recalls.

Their nutritionist suggested adding maize silage to the ration. 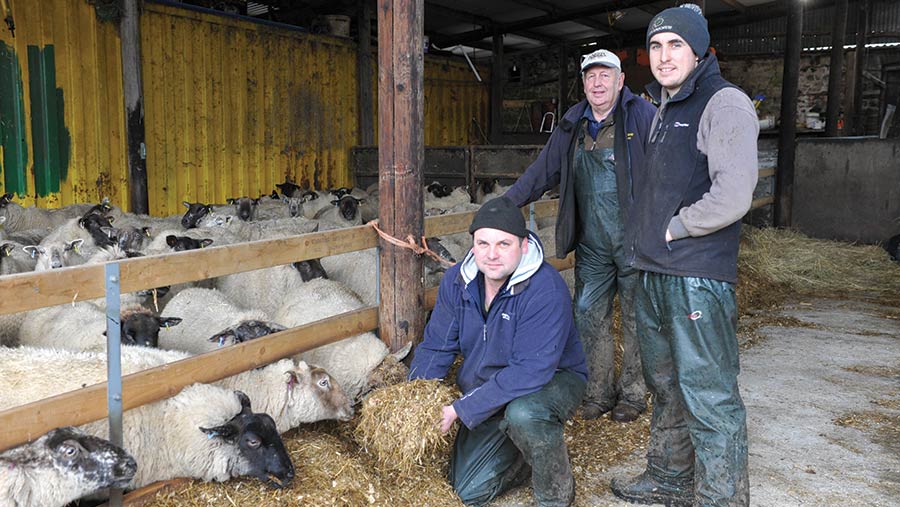 Owen admits he initially had reservations, because ewes are known to gorge on maize and become fat, putting them at risk of metabolic disorders in late pregnancy.

But by introducing maize silage into the ration just three weeks before lambing, the Reeses say the condition of ewes can be maintained.

“Although we were advised twin lamb disease could be an issue with feeding maize, we haven’t had a single case since we introduced it two years ago,” Tom points out.

He adds: “If anything, the flock is doing better on maize because ewes are producing more milk and the lambs are born stronger.”

1. Analyse grass and maize silage to establish if supplementary protein is needed.
• To develop an appropriate nutritional plan for pregnant ewes, it is important to know the feed value of the silage being offered.
• Maize has a lower crude protein content than grass silage, but it is generally high in energy, so is an ideal partner to high-protein grass silage.
• The high starch level in maize provides plenty of rumen-fermentable energy; this gives a synergistic effect with the high protein of grass silage.
• It is important the ewe’s protein and energy requirements are met so that colostrum and milk supplies are plentiful. Check the grass/maize silage intake is meeting the ewes needs by assessing silage dry matter intake and comparing it to the standard energy and metabolisable protein needs as ewes approach lambing.
• Supplements may be needed to provide additional protein, but the level depends on the forage analysis. Rapeseed meal, beans and soya bean meal are all possible supplements.

2. Condition score ewes
• It is very easy to overfeed single-bearing ewes, so care should be taken to check ewe body condition and feed ewes according to body condition score and litter size.
• In late pregnancy, ewes on maize can become fat and prone to metabolic disorders, such as twin-lamb disease, so when condition scoring, feel for backfat rather than visually scoring ewes.

For advice on feed rates see p4 of the Improving ewe nutrition PDF.

3. Allow sufficient feed barrier space
• Allow a minimum 15cm of feed space a ewe when feeding a total mixed ration to avoid cramming, which increases stress and may lead to abortion in extreme conditions.

The system at Bryn Farm is simple: a bucket of fresh maize is deposited in the central passage once a day and forked into the silage.

“There is no science behind it, but it is roughly 50:50 grass silage and maize silage,” says Owen.

The feed is pushed up with a fork about three times a day.

The Rees family give no supplementary feed. Instead, the aim is to produce lamb as cheaply as possible while maintaining ewe performance.

“Margins are very tight, and we are trying to keep costs low by making more use of home-grown feeds,’’ says Tom.

“Some of the ewes get a bit of barley when they are at grass, if they are a bit lean.’’

Ewes are typically at grass until they are housed three weeks before lambing, depending on the weather. Grass intakes are supplemented with baled silage and hay fed from a ring feeder.

Maize can easily be incorporated in the diet because the Reeses grow a large acreage as feed for their beef herd – the 2019 harvest yielded 49t/ha, with about 50t fed to the sheep.

Although it has been straightforward to add maize to the ewe diet at Bryn Farm, Owen admits it can be impractical to grow maize in some sheep systems.

“If we needed maize just for our sheep, we would only need to grow 2.5 acres [1ha], and at that level we wouldn’t do it, because it would need to be harvested and clamped,” he says.

Another option for sheep farmers is to buy maize from a local grower, he suggests, although keeping it fresh could be a challenge if it is delivered in large quantities.

Owen admits it is not always easy to get the feeding of ewes right, but with maize silage, he says, he has found a system that works for him.

“Some farmers can overcomplicate their systems, adding to their costs, but we keep everything as simple as possible, to keep our costs to a minimum,” he says.