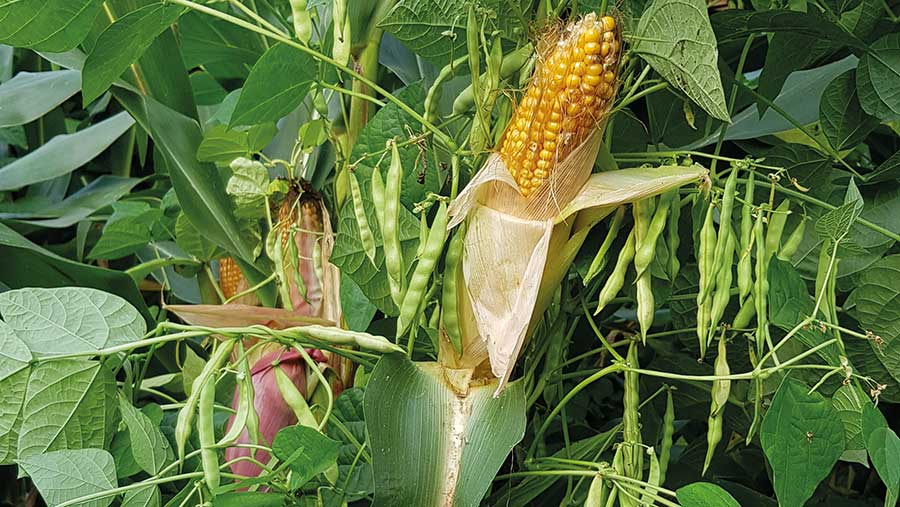 Intercropping of maize and climbing beans is gaining ground among German farmers keen to improve the quality of their silage.

Yields and protein content are particularly promising when the two crops are grown together under lower nitrogen (N) conditions, according to research carried out at the University of Hohenheim.

“You can combine economics and ecology in a very neat way,” says Willmar Leiser, head of the university’s State Seed Breeding Institute.

See also: How to improve crude protein levels in silage

Maize-bean intercropping is a traditional practice in Latin America, especially in the land-scarce highlands.

Breeding programmes in Germany have resulted in crops capable of producing very high biomass with lots of maize cobs and green bean pods at the end of the season.

Maize varieties tolerant to lodging are most suitable, as the beans climb up the maize stems and can pull them down if they are not strong enough.

Developing suitable bean (Phaseolus vulgaris) plants has been the bigger challenge, but varieties now have:

*In trials, phasin (lectin in beans) has not been found in blood or milk of cows fed maize-bean silage, and their performance has not been impaired.

Maize and beans can be grown in alternate rows at 37.5cm widths, but Dr Leiser advises mixing maize and bean seeds and drilling together – or buying them pre-mixed – at 75cm widths, so the beans grow up the maize in the same row, rather than growing across rows.

This allows for inter-row hoeing, practised by organic growers and an increasing number of conventional ones. It also makes harvesting easier.

Watch the video of harvesting of intercropped maize and beans at Kalkar, Germany, courtesy of Feldsaaten Freudenberger.

In trials, performance of pure stands of maize across four locations was compared to the same varieties intercropped with beans.

The total dry matter (DM) yield of the maize-beans plots was close to or equalled the maize-only yield of 18.7t/ha.

While the mean average CP of the four maize hybrids grown without beans was 7%, more than half the maize-bean combinations produced CP content of 7.5%, and a few were close to 8%.

There is also potential to further increase protein content, while maintaining the same proportion of beans in the silage, by using bean varieties with higher CP concentration in their biomass.

The benefits of intercropping are even clearer with reduced N fertiliser use.

Total DM yield of maize-bean mixtures in one low-N location in 2020 exceeded the mean average DM yield of 16t/ha in the pure maize stands by as much as 2.5t/ha.

Maize and beans together also outperformed the maize-only stands in CP content, with up to 5.8% CP, compared to a pure maize average of 4.3%.

“This significant increase in performance under N-deficiency makes maize-bean cropping particularly attractive for organic farming, and for conventional cropping, especially in areas where N fertilisation is limited,” says Dr Leiser.

The advantages of intercropping maize and beans go beyond yield and protein benefits, he adds: “The beans protect the soil from erosion, fix atmospheric N under N deficiency, provide food for insects over a long period of time and give shelter to ground-nesting birds.”