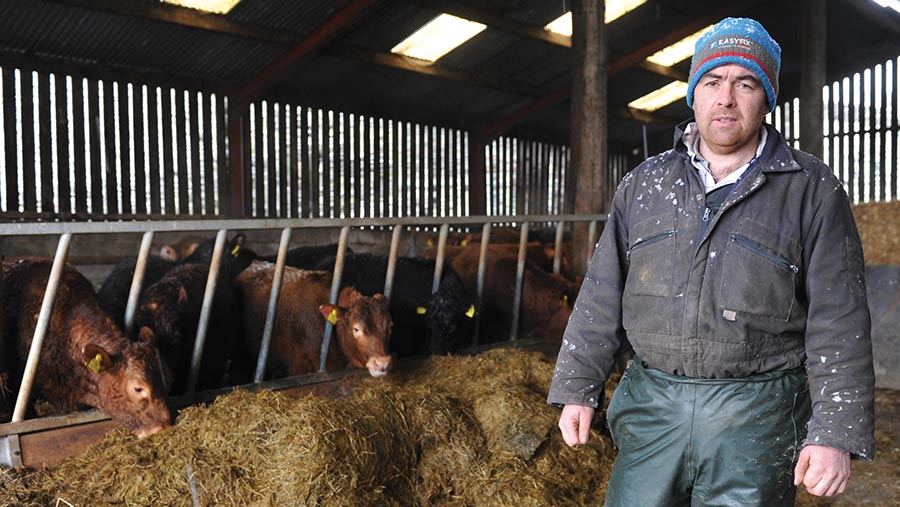 Rationing the silage intakes of dry suckler cows according to body condition is resulting in forage savings of more than £40 a head on one Welsh livestock farm.

Gwion Owen, who runs a 300-cow herd in Conwy, previously fed silage to appetite – about 30-35kg a head a day – but cows were overfat at calving.

After analysing silage quality and comparing it to required intakes, he calculated he was exceeding their actual energy requirements.

Mr Owen now measures their body condition at the start of housing and groups accordingly.

Calvers and heifers are in one group and fed to ensure they have sufficient nutrition to mate at 13-14 months and calve at two years old. Thin cows are culled out and the remaining cows are housed at BCS 3.5 – 4.

Silage intakes are rationed to no more than daily maintenance requirements which creates a forage saving of £50 a head (see panel: Feed savings). 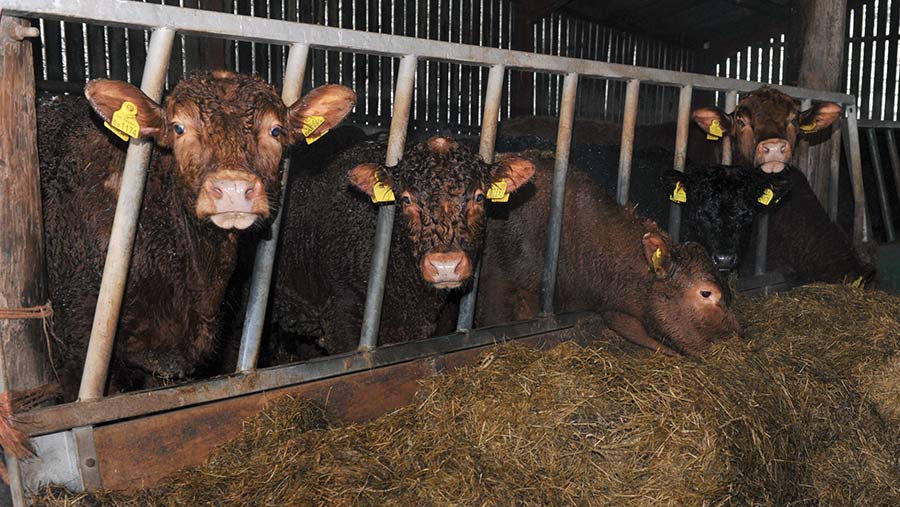 Reducing the amount of silage fed has saved £50 a head.

The feed savings are calculated as follows by the farm’s nutritionist, Rhidian Jones of RJ Livestock Systems.

The ration, at 75% of the predicted intake (28kg) is the lowest recommended for rumen fill, points out Mr Jones. In this example, the cows only need 21kg of silage at 35% DM to provide 7.5kg DM and 74MJ a day, so they lose weight over winter, he explains.

This results in cows dropping a condition score before calving with no detrimental impact on health and welfare, says Mr Owen.

Despite cows clearing up their daily silage allocation reasonably quickly, they show no sign of agitation at the lower rates of feed, Mr Owen reports.

“I was worried they would be noisy and unsettled day and night, but they are content with what they are allocated, he says.

“I am confident I can keep cows on a lot less than I would once have fed them and it is costing me less to keep them over the winter.”

Mr Owen had been seeking ways to cut costs because he is unable to outwinter cattle on his land, which rises to 1,550ft, and is in a high rainfall region.

“Housing is an expensive way to keep suckler cows but we don’t have the climate for outwintering. It is either [a case of] housing or exiting beef production,” he says.

Adding straw to the diet was cost prohibitive so Mr Owen has opted to feed stemmy, bulky-cut silage at around 10ME.

Blocks of silage are placed in the feed passageways of sheds, with cows feeding from either side and only enough dispensed to meet their requirements.

“We feed with a shear grab and we know that each grab weighs 420kg so we allocate according to the number of cows in the group,” Mr Owen explains.

He has further increased feed efficiency by reducing cow size, enabling the farm to support more cows on the same acreage – it is carrying 25% more liveweight/ha, he estimates.

There are two Stabiliser herds with average cow weight in the younger herd at 550kg and 620kg in the older herd; Mr Owen is continuing to drive this down through recording and genetics.

There is an artificial insemination programme for heifers – they are synchronised to come into heat over five days from 21 July.

“AI allows us to select from different bulls and to get the top genetics, and it is cheaper than using a bull,’’ Mr Owen reckons.

By retaining more heifers or by keeping older cows for longer, cow numbers are increasing.

“We aim to keep cows for 10 calvings as genetic gain from younger cattle is much better,’’ says Mr Owen.

Rotational grazing is another strategy he is using to reduce costs and drive up production.

He established a cell grazing system in 2019 so has yet to experience the full benefits – average farm cover in the final week of February was 1,950kg/DM/ha since he only started rotational grazing last summer, but after a full season in 2020 he expects to see a marked difference next spring.

“We were setting up the cell grazing last summer but we will be driving it this year, we should be able to keep 20% more stock because we are growing more grass,” says Mr Owen.

The combination of efficiency changes should put the business in a competitive position going forward, he hopes.

“It all comes down to the bottom line, we are all predicting the beef industry is going to be challenging so we are having to drive the things that are going to be more impactful.

“The changes we have made not only allow us to keep more cattle, but to reduce our fertiliser and concentrate use.”

The base of most dry suckler rations is usually silage, straw or hay, but care is needed to ensure enough effective rumen degradable protein is available to produce sufficient rumen microbial protein.

A forage analysis will establish how much rumen degradable protein (RDP) is in the ration – careful supplementation is required in straw-based rations as straw has a low nutritive value.

Without enough RDP, rumen bugs cannot thrive and in extreme cases this can result in rumen impaction and, if action is not taken, death.

The target crude protein for dry cow rations is 10% DM, but you need to ensure this is what animals receive.

Examples of dry suckler cow diets a head a day, assuming average quality silage and hay is being fed.

The quantity of mineral supplementation also depends on the diet.

“In a straw-based ration there is little to no minerals and vitamins coming from the straw, therefore a suckler cow mineral should be supplied at around 100-120 g/day,’’ Ms Young recommends.

“With silage or hay-based rations, a mineral analysis will give an indication of how much of the mineral supply is coming from forage, but generally a lower supplementation of 60-80g/day is sufficient.”

A high magnesium suckler cow mineral, at a minimum of 10%, is advisable in the two-to-three weeks pre-calving.