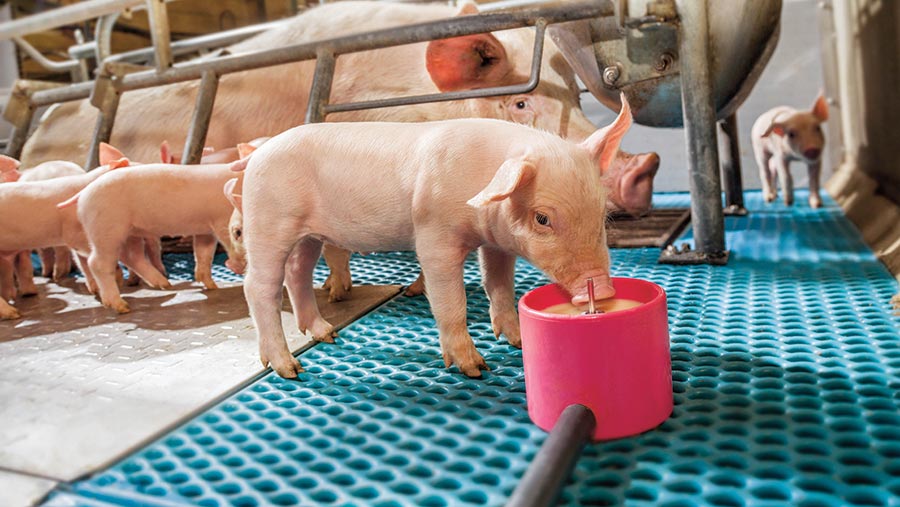 Advances in a sow’s genetic ability to produce more live born piglets are forcing farmers to look at ways to better support the sow and her offspring.

With only 12-14 functional teats and litter sizes now regularly exceeding 15 born alive, due to an increase in sow prolificacy, support mechanisms are becoming necessary to help rear additional numbers.

For Yorkshire farmer Simon Craig, installing a milk supplementary system into every farrowing pen is paying dividends. His average born alive is 15.5 piglets, with litters over 20 piglets not uncommon.

See also: 4 early signs of tail biting to watch for on pig farms

He used to remove smaller piglets temporarily and place them into rescue decks where they were offered supplementary milk.

However, in October 2016 he decided to install the Neopigg RescueCare system from Cargill.

The system supplies milk to one Rescue Cup in each farrowing pen, providing every piglet in the litter access to supplementary milk. It costs roughly £90/cup/crate (based on a 500-sow unit with 120 farrowing pens) excluding fitting.

Since installing the cups, Mr Craig has seen multiple benefits. They include:

The cups, which provide ad-lib milk from day 4/5, are fixed to the slat near a heat pad, with milk pipes running underneath the floor to avoid catching.

The first rescue milk fed is a rich formula, high in lactose and energy, and is designed to mimic sows’ milk.

It is supplied as powder and is mixed with water (1.5kg of milk powder to 10 litres of water) and fed at a temperature of about 25-28C after passing through a heat exchange system.

From days 8-10 a follow-on milk is introduced called Rescue Smooth. This has added cereals, proteins and milk and helps pre-condition the gut for the transition to solid feed. This is fed until weaning at a temperature of 24C.

On average, piglets will consume about 400g of milk powder while on the system, at a cost of 90p-£1 a piglet over 24 days.

Mr Craig has also noticed that piglets eat more pre-weaning pellets due to the gut being conditioned by the supplementary milk.

The system constantly monitors the milk temperature, mixes the milk at timed intervals in the tank and distributes it as required to the cups, which have a unique nipple that prevents milk overflow. 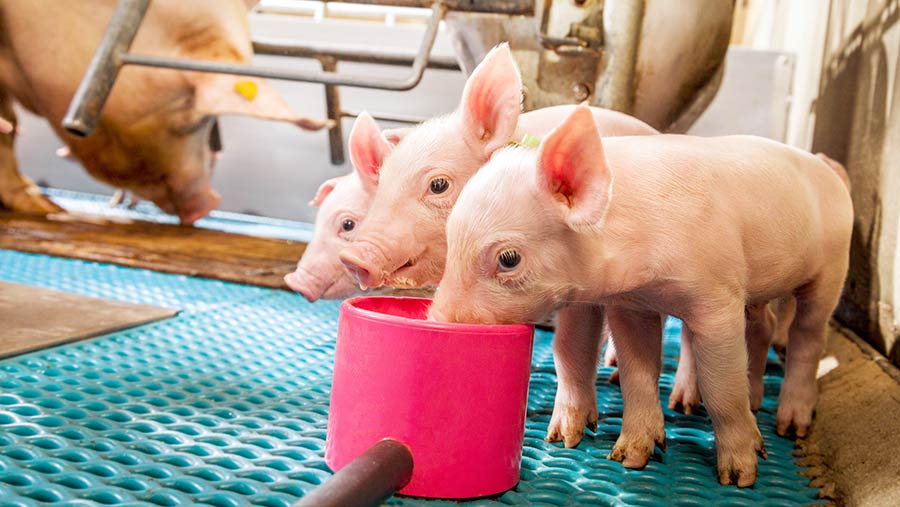 One feeding cup, providing ad lib milk, is installed in each farrowing pen

The heat exchange unit ensures the milk is delivered at a constant temperature. This shuts off automatically when the feed tank becomes empty.

Keeping the system clean is critical for it to be successful. The downside to this is the extra labour; it takes one worker half a week to maintain the system and keep it clean.

Every three days the system is thoroughly cleaned. It is flushed with water at 70C, each of the 450 cups are then blocked off and a specifically designed detergent is added into the system.

It is then flushed out with water again. The whole cleaning process can take about 60-80 minutes.

Mr Craig says that after cleaning there is an increase in milk being consumed.

“The piglets can detect the acidification in the milk as we are approaching day three,” he says. “After the system has been cleaned milk intake increases.”

Other improvements the farm has made

Mr Craig is always looking at ways to improve the system as sow numbers have increased to 2,000.

He says: “We are now supporting larger numbers that these super prolific sows produce.”

Over the past 12 months he has adopted a 2/3 weekly batch system which allows him to meet the numbers required at the rearing farms.

He has also introduced wet feeding of sows, which has helped contribute to better performance.

Why do large litters require supplementation?

Cargill pig specialist David Hardy says that as a benchmark, without supplementary milk a sow will yield between 90kg and 100kg of 12-13 healthy pigs weaned at four weeks old.

He adds: “Leaving more piglets on the sow reduces the need for foster sows, which in effect have weaned a litter of piglets and have an exhausted milking ability.

“Keeping foster sows is not the ideal answer to rearing large litter numbers. They cost money as those sows are not producing themselves.”

Having sows in better condition that get back in pig quicker will benefit the litter index (number of litters per year). Increasing the litter index by 0.1 from 2.3 to 2.4 litters a year on a 2,000-sow unit should increase the number of farrowings from 4,600 annually to 4,800 – potentially another 2,400 piglets.

Mr Hardy says he has seen some exceptional results on farms using this system.

“I’ve seen batches of sows yielding 14, 10-plus kilogram piglets at weaning and one farmer reported weaning 18 piglets a sow on occasions. It would be very unusual to see this in a conventional farrowing system.”