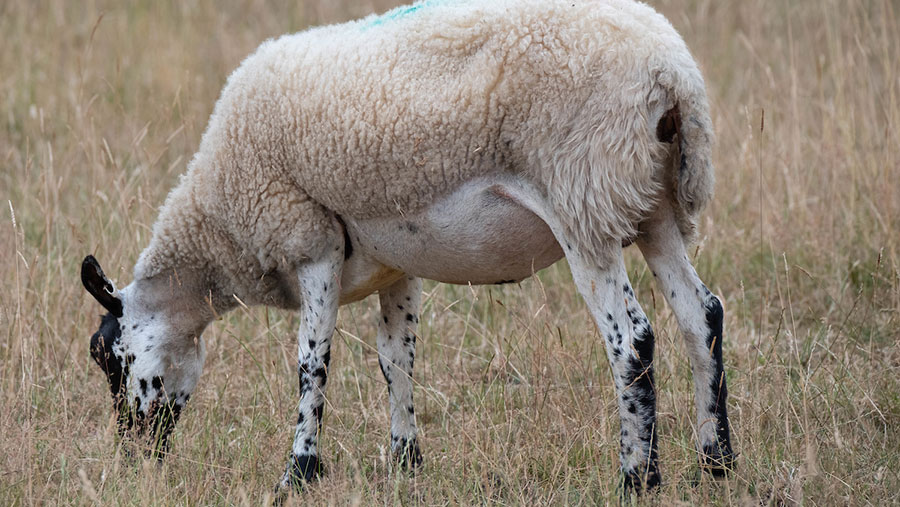 Drought-like conditions in the summer cause numerous issues for livestock farmers, not least the concern of potential forage shortages later in the year.

Producers also need to be aware of the impact on the content of the forage as well as volume, including the mineral availability of grazed grass and other forage.

Farmers Weekly spoke to Nigel Kendall, a lecturer in nutrition at the University of Nottingham School of Veterinary Medicine and Science, and Peter Bone, an independent ruminant mineral nutrition specialist from Livestock & Grassland Mineral Consultancy, to understand the weather’s impact on mineral availability in grass.

Here are the minerals that need to be looked out for in the dry weather and in the case of sudden rainfall:

The dry period affecting many parts of the UK has left many grazing platforms looking like standing crops of hay which may have serious implications on pasture vitamin E.

See also: Sheep health and nutrition tips in a heatwave

Hay, when compared with grass, has a much lower vitamin E content so grazing is likely to be low in vitamin E, which has antioxidant properties.

Due to the relationship between selenium and vitamin E, this is likely to cause an increased selenium requirement in grazing animals.

Selenium deficiency can cause:

Testing of selenium status and supplementation if required will be important. You can test for deficiency through analysing forage samples and/or blood samples.

Forage samples are probably the best way to get a broader picture of what is going into the stock. There are drenches and boluses available, but selenium can be oversupplemented, so it is important to confirm the need first.

It is also important to check what else is in a supplementation product to avoid issues such as copper toxicity.

When there is rain and grass growth returns, animals which may have been held back by the lack of forage/grazing will potentially start to grow rapidly on the lush protein rich grass.

This is likely to be particularly prominent in growing and finishing lambs, but could be seen to a lesser extent in calves.

Rapid growing lambs have the highest cobalt (vitamin B12) requirement.

Cobalt deficiency is likely to lead to:

If a sheep farmer has had cobalt deficiencies before, it is especially likely they will see them again this year. However, deficiencies could also occur on farms where it have never been an issue previously.

To assess a vitamin B12 deficiency, blood analysis is required, so veterinary advice is necessary.

Drenches, injections and boluses are all possible supplementation methods – the vet should be able to advice on the most effective option.

When it rains the potassium (K) from previously applied fertiliser and farmyard waste (manure, slurry, dirty water) is likely to solubilise and be taken up more rapidly by the growing grass than magnesium, which is less soluble and will take longer to be available to the plant.

This will lead to a high potassium and low magnesium intake, which classically results in increased risk of hypomagnesaemia.

Hyperaesthetic animals, which are easily spooked. This often displays as a general nervousness in the herd or in individuals with increased flight distances and excessive reactions to stimuli.

Farmers who have taken first cut and put any form of fertiliser on the ground just before or since the dry weather began need to be particularly vigilant.

The grass may take a while to get growing, but as soon as regrowth begins, prophylactic supplementation should be considered, especially if stock is on ground that has been fertilised just before or since the dry spell began.

Producers should consider making magnesium supplementation available as soon as there is significant rainfall to prevent potential loss of stock.