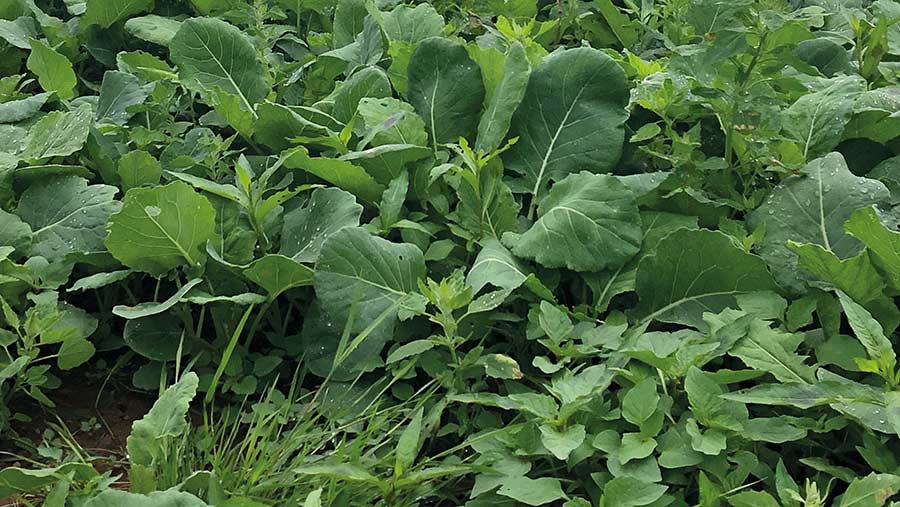 The benefits of including brassicas in a rotation are many, from reducing reliance on bought-in concentrates to extending the grazing season.

Once brassicas have established, there are few opportunities for weed control.

Avoiding mistakes at the establishment stage will help the crop to achieve its full potential, as even moderate weed populations can reduce yields significantly.

See also: Outwintering cattle on kale or grass silage: Which is best?

This has never been so important with the emphasis now on growing and managing all crops with minimal pesticide intervention, says Helen Mathieu, sales manager for seed company Germinal.

“Selecting the right field and getting everything done in a timely fashion will give the crop the best chance,” she says.

Ms Mathieu gives her advice on including brassicas in a rotation and how to achieve the best outcome at establishment.

Select the brassica appropriate to your need

Brassicas have different maturity dates – an important consideration when planning at what stage the feed will be needed.

For instance, kale will take six months or longer to reach maturity, so a crop sown in May or June will be ready for feeding from November to carry stock through the winter.

Swedes drilled at a similar time are likely to be ready for feeding in January.

Rape and kale crosses, such as Redstart and Swift, are much quicker to reach maturity – in as little as eight to 10 weeks – and that means they can be grazed sooner.

These can also be drilled up until mid-August, making them very versatile, says Ms Mathieu.

“Bear in mind there is no point drilling any brassica before mid-May, which is a similar time to maize sowing.”

Soil testing is the starting point for any crop, to ensure that the nutrient status is where it should be. For kale this is index 2 for phosphorus (P) and potassium (K) and a minimum pH of 6.

Soil test well in advance and lime if necessary.

“Lime in plenty of time, ideally the previous autumn – but there is also the option to top dress with prilled lime at sowing, which can help to speed things up,’’ says Ms Mathieu.

The most common practice for establishing brassicas is by direct-drilling, but they can also be established using conventional plough and press cultivation.

“The benefit of direct-drilling is retaining strength in the surface layer, which will help retain the soil structure when grazing the crop, particularly with cattle,” she says.

For a typical establishment regime, spray with glyphosate when pasture or weed cover is about 2,000kg DM/ha (809kg DM/acre), typically 8-10cm sward height.

At between days five and seven post-spraying, graze hard, or cut to remove as much vegetation as possible.

“Eliminate all the competition on the surface – it needs to be kept clear for long enough for brassicas to take hold,” says Ms Mathieu.

Apply fertiliser on the basis of earlier soil tests. Nitrogen should be applied to achieve optimum crop growth, using RB209 as a guide.

“Brassicas do respond to readily available nutrients of N, P and K, applied to the seed-bed, or later if necessary, but always consult your RB209,’’ she says.

“When you are applying slurry or farmyard manure, it is best to know what contributions these inputs are making so you can adjust artificial fertiliser applications accordingly.

“Ideally, work on the basis of actual analyses, as this may be important in the context of your nitrate vulnerable zone maximum nitrogen limit.”

Brassicas do not have a high requirement for N, but even at current prices, Ms Mathieu says it is economically viable to apply N as the growing costs are so low.

If cultivating, broadcast seed, harrow and roll, or direct-drill and roll.

Brassicas should ideally be drilled when soil temperatures are about 10C and rising, with optimum timing dependent upon crop type and variety.

“This can be any time from early to mid-May but later further north,” says Ms Mathieu.

She warns against drilling too early. “In 2021, soils were very slow to warm up and some earlier-sown brassicas failed to reach their full potential,” she says.

Seed rates are typically between 5-7.5kg/ha (2-3kg/acre), depending on crop type and variety. Marginally higher seed rates are recommended when broadcasting compared with direct-drilling.

Whatever the establishment method, seed should be sown at a depth of approximately 1cm.

Brassica crops must be monitored closely for pests, diseases and weed ingress, particularly during those critical first six weeks of establishment.

Weeds should be controlled in the previous crop or by spraying prior to cultivation or pre-emergence.

Occasionally there is a need for controls to manage pest such as diamondback moth and sawfly. But Ms Mathieu says this should only be done if infestation reaches a threshold likely to cause the crop serious damage.

“Seeing the odd moth making holes in the leaf is not a reason to take action, but it depends on the area and how much oilseed rape is grown locally, as this will dictate population levels.”

“In other words, the increase in fertiliser prices will most likely equate to around 2p/kg of DM or £20/t.”