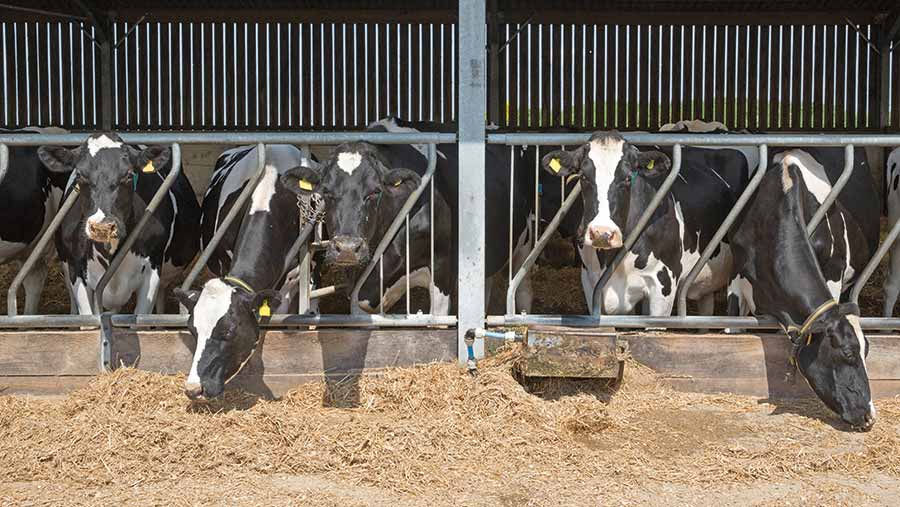 A leading expert on cow management believes on most farms there is a failure in the transition period, with almost 65% of problems occurring in the dry cow/fresh cow period.

Dairy vet Gordie Jones, who is also a partner in the 3,400-cow Central Sands Dairy, Wisconsin, USA, says when cows enter the dry period, it’s often a case of them having too much or too little of something.

The result is problems such as milk fever, displaced abomasums and in some cases the culling of cows prematurely.

However, he believes a good dry cow programme will stop this.

Quite often, dry cow diets are being asked to solve all of the issues relating to problems in the dry period, when generally the issue lies not with the feed itself but with the feed bunk management and cow comfort.

He believes solving issues in these areas will result in immediate payback due to extra milk produced in the fresh period.

Speaking at an event organised by Davidsons Animal Feeds, Dr Jones outlines how to troubleshoot  bottlenecks in the dry period.

Observe what cows do in a 24-hour period:

Answering these questions will often throw up where the issues lie.

Dr Jones says one of the biggest things he sees when visiting dairy farms is concrete in the trough in the morning.

“The single biggest failure is not getting enough feed in the cows in the morning. If you can see concrete in the trough before midday then your cows have failed to get their last bite of feed.

“Cows will eat until they are full and then sleep. If they were unable to get their last bite because the trough was empty then you have instantly lost 2.5 litres of milk.

“You never want to have hungry cows [both dry and milking cows]. If you find the behaviour of your cows change when you go in and feed them [ie, they all get up to feed], then you have hungry cows,” he explains.

Are cows comfortable? The telltale signs

Cow comfort is also paramount to encourage sleeping and rumination. This means offering at least 4in of bedding on top of a mattress.

Again, Dr Jones says if cows change their behaviour after they have been bedded up (for instance, more are lying down after bedding up) then they are not comfortable and need bedding up more frequently.

A telltale sign cows are not comfortable is if they are standing about.

A cow should only be standing to milk, eat and drink and then lay down again.

If she’s standing and not doing any of these things then there is a problem.

For every extra hour they are laying down in the milking herd, it’s an extra 2 litres of milk in the tank.

Once you know that you are offering enough food, they have adequate feed and water space and are comfortable, then you can focus on the diet.

Dr Jones recommends only feeding one diet throughout the dry period, which should be a low-energy, high-fibre diet.

He terms it “the Goldilocks diet” as it provides just the right amount of nutrition.

The idea is to encourage dry cows to get their energy needs by eating more, which means when they go fresh, they will have trained their bodies to eat more in the dry period and milk let-down will drive their intakes.

“You want the fresh cow to be looking for feed when she calves,” he explains.

The Goldilocks diet should contain:

“Most dairies have a goal of 4%-6% displaced abomasums [DAs], but with these low-energy, high-fibre dry cow diets, less than 1% is achievable and is what we are achieving at Central Sands,” he says.

Often when these diets fail, Dr Jones says it’s as a result of particle lengths being too long, which allows sorting.

Poor-quality forages – too high in fibre or too low in protein – can also be a problem.

Mould and mycotoxins are also things to look out for.