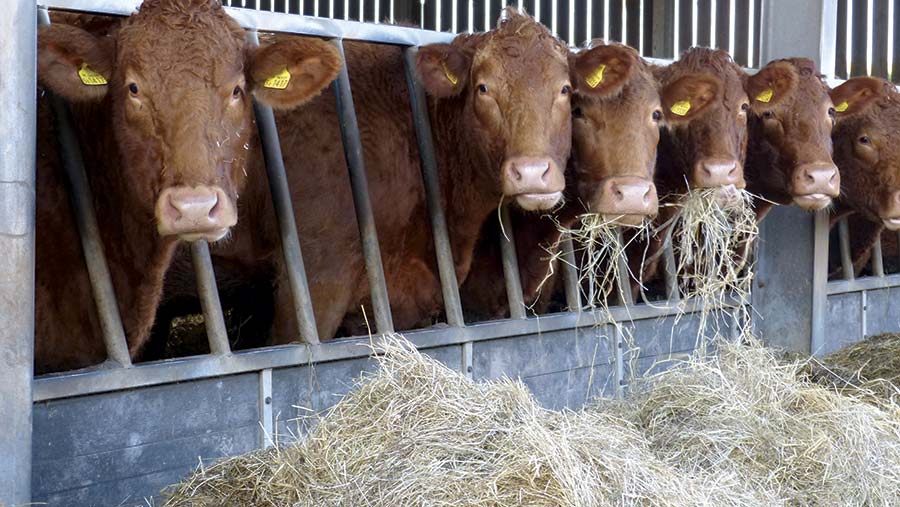 Making sure suckler cows are fed enough micronutrients in the run-up to calving is vital to ensure cow and calf health isn’t compromised.

Farmers should be thinking about feeding micronutrients at least six weeks pre-calving to combat any deficiencies in the diet.

The exact amount of supplementation should be based on the extent of any shortfall and possible dietary interactions, according to nutritionist Debby Brown of Dugdale Nutrition.

Where the ration is mostly forage, such as in a spring calving herd, that is where deficiencies are most likely to occur.

She says: “If the soil cannot supply sufficient trace elements to the plants the animals are eating, a deficiency will occur.”

Ms Brown says the starting point in identifying any micronutrient issues is to:

See also: BCS 2 is “too low” for post-calving cows

Mineral supplementation plays a vital role in the immune system, cow fertility, colostrum and general production. Deficiencies can lead to serious health issues for both cow and calf.

For the cow they include issues such as retained foetal membranes, slow calving, calving difficulty, milk fever, calf death and poor calf health.

For calves a maternal deficiency of some micronutrients in late pregnancy can compromise their immune system. This may increase susceptibility to scour, pneumonia, navel ill and joint ill.

Farmers Weekly looks at the essential micronutrients in pre-calving suckler cows and how to supplement them.

Why it’s important
Iodine is a component of the important hormone thyroxine which controls the animals’ energy metabolism. It is also essential for foetal growth and development.

Symptoms
An iodine deficiency during pregnancy can cause calves to be born small and weak; an increased incidence of goitre; reduced resistance to hypothermia, decreased survival and low immunity. Cows also tend to retain their afterbirth.

Supplementation
Iodine is not stored in the body, which means it must be supplied in the diet.

Farmers who have calves born with an enlarged thyroid (goitre) have an iodine deficiency problem and should look to supplement.

Why it’s important
Copper is an essential part of several different enzymes which allow the body to function.

Excess copper is stored in the liver. Ruminants are susceptible to copper toxicity, either if a very large amount of copper is ingested or injected at one time, or if copper accumulates in the liver over a long period of time.

Symptoms
Signs of copper deficiency include the speckling of dark coated cattle due to reduced pigmentation of the hair around the eyes.

A more serious deficiency results in poor growth and scouring, and occasionally a thickening of bones around the joints. Infertility in cattle is also often linked to copper deficiency.

Deficiency can occur due to low copper intakes or because of an interference with other elements – specifically between copper, molybdenum and sulphur, which reduces the availability and absorption of copper from the rumen.

Copper deficiency can be diagnosed from analysis of blood samples or liver tissue.

Supplementation
Due to the risk of causing toxicity, animals should be supplemented with copper only when laboratory tests confirm that extra copper is needed.

Why it’s important
Cobalt is an essential component of vitamin B12 which is associated with energy metabolism.

In ruminants this vitamin is produced by rumen micro-organisms which require a regular supply of cobalt in the animal’s diet.

Vitamin B12 is secreted in milk which provides an early source to calves. Cobalt is only required in the diet as the rumen develops.

Symptoms
Deficiency results in ill-thrift accompanied by poor appetite. Where sheep and cattle are grazed on the same pastures, deficiency may be diagnosed in the sheep flock but not in the cattle.

Heavy worm burdens reduce the absorption of vitamin B12 from the gut, so may induce cobalt deficiency even when dietary cobalt is adequate.

Supplementation
Oral drenching with cobalt raises blood vitamin B12 level for only about seven days. Vitamin B12 injections are an alternative to drenching but need to be given every three to four weeks.

For longer-term supplementation, cobalt can be supplied in a rumen bolus, either on its own, or in combination with other trace elements. Boluses provide several months’ supply of cobalt.

Top dressing pastures with cobalt sulphate (at the rate of 2kg/ha every third year) can be carried out but is not considered cost effective in the UK.

Why it’s important
Selenium works with vitamin E to protect tissues against oxidation and the breakdown of cell membranes. It is also important for immune function.

The selenium requirements of stock are related to the vitamin E content of the diet. For diets low in vitamin E the requirements for selenium are increased, and vice versa.

Symptoms
Lack of selenium is mostly widely recognised as White Muscle Disease (WMD), ill-thrift, and infertility. The occurrence of WMD is generally low now in the UK. In young animals, selenium deficiency may be a cause of ill-thrift.

A lack of selenium can also cause poor reproductive performance and an extended calving period in cattle. Retained placenta in cattle can also be associated with selenium deficiency. Excess selenium is toxic to sheep and cattle.

Supplementation
Oral drenching with selenium salts can provide adequate supplementation for one to three months.

Selenium can also be given by injection, with slow-release formulations providing up to 12 months’ supply from a single shot.

Selenium can also be given in a rumen bolus or applied to pasture in combination with other trace elements. 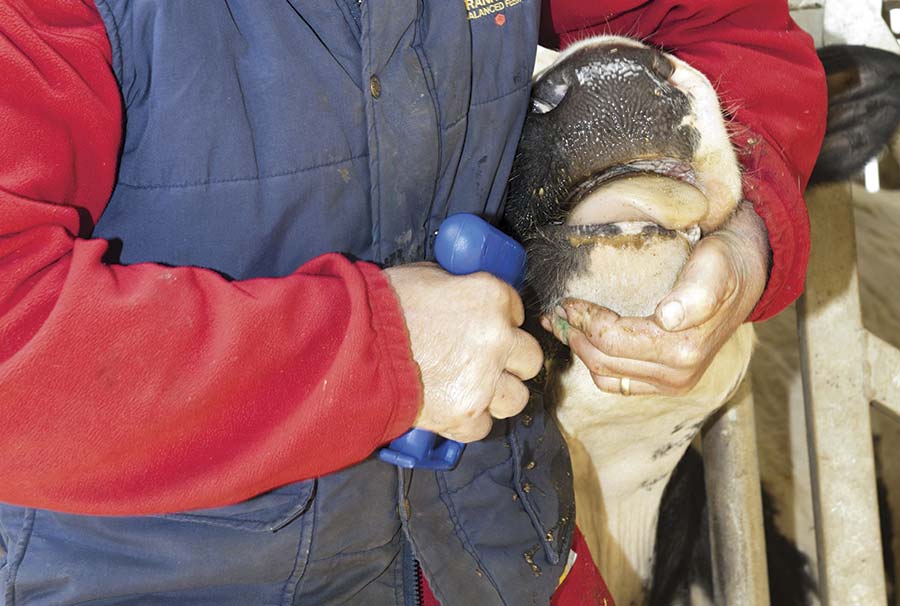 Why it’s important
Calcium is the most abundant mineral in the body, and generally, there are good levels in forage.

However, at the start of lactation the calcium requirements are often unable to be met by increasing calcium intake. A lack of calcium in the blood affects the animal’s ability to regulate muscle contractions and relaxation.

Supplementation
In order to meet calcium demands cows must be able to mobilise stored calcium from their bones to meet demands during lactation.

Mobilisation of bone calcium is control by the parathyroid hormone, which is activated when calcium levels in the blood drop. At the same time another hormone derived from Vitamin D stimulates the kidneys to increase absorption of calcium.

If intakes of calcium at calving are enough, these mechanisms to stimulate calcium release from the bones won’t be activated.

Therefore, it is recommended to decrease calcium prior to calving so cows can mobile calcium from their bones and for the kidneys to increase absorption.

Magnesium and potassium levels can both affect the ability of cows to mobilize calcium reserves, so it is important these are correct.

Why it’s important
Phosphorous is important for energy transfer and deficiencies can lead to infertility. However, requirements are very small.

Symptoms
Excessive quantities can prevent the uptake of calcium, resulting in milk fever.

Supplementation
Recommended levels of phosphorous within a mineral supplement is generally 4-8% depending on forage conditions and concentrate inputs.

You must consider again the calcium: phosphorous ratio of the final ration. Elevated phosphorous intake can decrease the action of parathyroid hormone (PTH) leading to an increased likelihood of milk fever.

Why it’s important
Magnesium is important for enzyme activation, glucose breakdown and other functions.

Supplementation at 2-10% of the ration depending on confounding factors (ie 10% on lush spring grass). 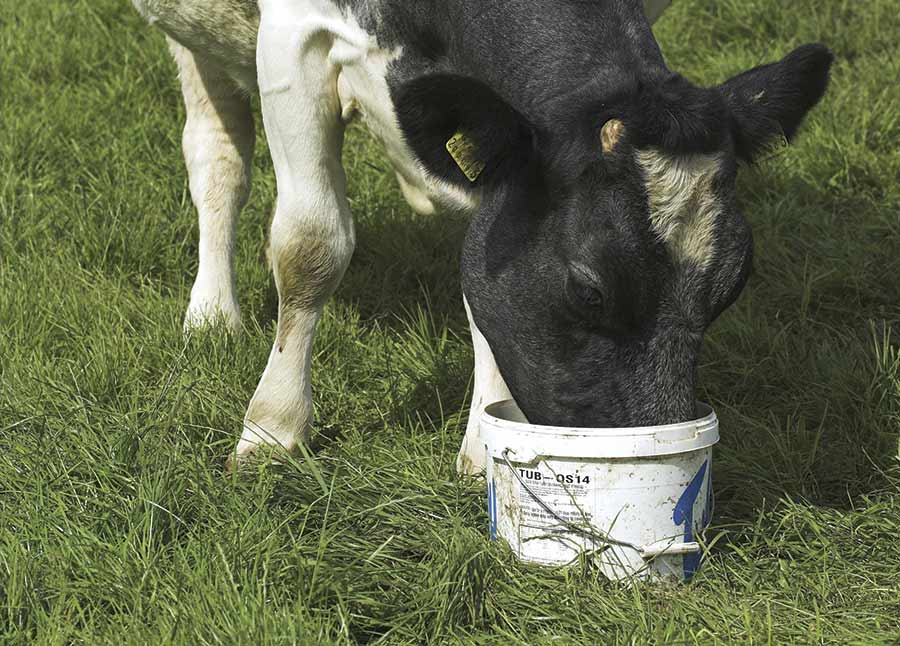 Why it’s important
Potassium is the third most abundant mineral in the body and is involved in acid-base balance, osmotic pressure/water balance, muscle contraction and nerve impulse transmission.

Excessive quantities in forage can lead to a reduction in magnesium intake, increasing the risk of grass staggers.

Supplementation
Forages are usually a good source (1-4% potassium) and are very high in lush pasture decreasing with age.