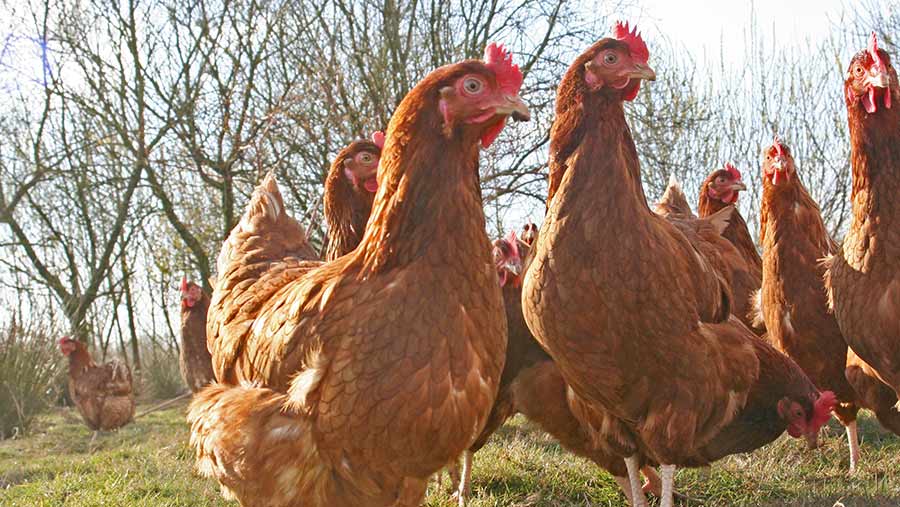 Over a modern laying hen’s lifetime it will produce many multiples of its bodyweight in eggs, and as genetic selection improves, so too does the length of the bird’s productive laying cycle.

But the trade-off of this genetic marvel, is that managing that potential becomes more complex.

Under ideal conditions, Hy-Line commercial hens can produce a 28.4kg egg mass output to 100 weeks, according to nutritionist at the firm Marcus Kenny.

“I know we don’t keep birds up to 100 weeks in the UK, but that is what they are genetically capable of,” he says.

“It can produce more than 14 times its weight in egg mass over its lifetime. That’s a tremendous output. “Not only can it produce that egg mass, it can do so very efficiently, with a feed conversion ratio to 60 weeks of 1:1.87-1.9.”

That means for every 1.53kg of feed consumed by a bird, a dozen eggs are produced.

But getting close to that ideal performance requires the best management alongside razor-sharp attention to nutrition, and that begins with getting birds off to a good start in the rearing period.

The best measure of this is hitting bodyweight targets for birds at three, six and 12 weeks.

“Achieving this is critical in terms of achieving the physiological development required to attain the quality of layer required at the onset of lay,” says Mr Kenny.

A piece of research done by Hy-Line that took a sample of flocks and recorded bodyweight at 18 weeks found that those in the heaviest quartile of birds laid 318 eggs by 70 weeks, compared with 281 eggs for the lowest quartile (see below).

Missing this target is usually down to some form of bird stress disrupting feed intake, according to Mr Kenny.

Nutrition must be adapted to a changing egg size market.

For instance, to achieve a larger egg size it is important to provide birds with the nutrients required to support larger eggs – especially at the beginning of lay.

The key is to ensure that the birds’ intake of key nutrients, in particular energy, sulphur amino acids and linoleic acid, meets its needs for higher egg size.

A nutritionist should formulate a diet to account for the birds feed intake, as not achieving the daily nutrient requirement level may well result in egg weight targets not being achieved.

“We can often see depressions in growth in the early stages that can be quite significant – and then they persist right the way through to 18 weeks of age.

Switching from Starter to Starter Two or Grower diets, change in feed form, bird vaccination, heat stress or ventilation issues are all typical causes of stress in pullets, which can then cause depression in feed intake by up to 25%, he says.

“The feeding programme should be managed based on physiological development, not age, and should be adaptable to achieve bodyweight objectives at all stages of rear, regardless of the stresses imposed on the flock,” explains Mr Kenny.

Putting a higher-spec diet in place either when birds show signs of stress, or pre-emptively when, for example, vaccination teams are scheduled to arrive can mitigate the risk.

“If we miss any part of that rearing period, it’s very likely that the bird will have some system that is compromised.”

Assuming a good rearing weight is achieved, the next stage is meeting birds’ needs as they enter production.

Again, the potential is great: depending on lighting regime, an egg mass of more than 1kg would be expected per bird by 23 weeks, 2kg by 25 weeks and more than 4.5kg of egg mass by 35 weeks.

The bird, therefore, may have not reached its physiological maturity but its output is way over twice its bodyweight.

Furthermore, it has to grow from about 1.5kg to its mature weight of 1.9kg by 32 weeks.

“The goal is to have a positive bodyweight gain from every week between transfer to 30 weeks of age.

“That’s a lot of bodyweight to gain, and we know the best flocks are the ones that achieve that mature bodyweight by 32 weeks of age.”

High energy pre-lay and early-lay diets are becoming more common to support this demanding period, in particular given that birds’ daily feed intake level is not fully developed.

Some farmers are reconsidering nutrition as birds progress through to later lay, adds Mr Kenny.

“We’ve got some free-range flocks that are producing at 92% production up to 52 weeks – egg production is almost plateauing, rather than tailing off, and that means we can have birds producing on average an egg mass output well above of 55g/day.”

The theoretical energy requirement for that size egg is in excess of 310kcal/day, but usually diets reduce energy levels as birds age.

“I think we sometimes overlook feeding birds to their egg mass output.

“It’s one of the things that I feel we need to take a look at – if birds are still performing well above 55g egg mass output per bird per day, we need to support them with a high energy density diet.”

Free-range layers may have yet higher energy requirements, in particular if feather cover is not 100% – particularly in the winter.

Ultimately, however, the choice of how to spec layer diets comes down to economics.

“We can minimise our cost per bird by feeding lower nutrient density diets, and perhaps save ourselves 10p/bird, but we’re not necessarily maximising our profit – and could be reducing our margins.