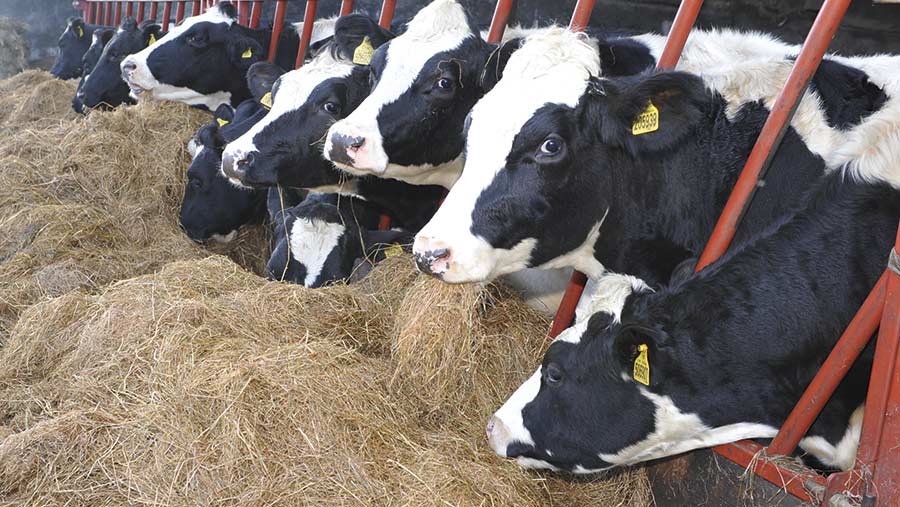 A key business objective is to produce as much milk from forage as possible, to reduce bought-in feed costs.

To achieve this, the Edwards have introduced grass silage with a very high digestibility (D) value into cow diets, produced using a multicut system.

The approach was first trialled at New Dairy as a Farming Connect Focus Farm project in 2017.

Insufficient carryover of forage stocks in 2017, the first year of the project, meant it was difficult to exploit the system and the ration had to be regularly supplemented with bought-in concentrates such as brewers’ grains.

There were also challenges in 2018 due to the very dry growing conditions, but four cuts were taken.

When the first-cut silage was included in the ration in early June 2018, milk production in the whole herd increased by 1.5 litres a cow a day, and 1.5kg a cow of blend was removed from the ration.

The business is now in its third year of using the multicut model and has achieved further improvements this year thanks to more favourable weather and growing conditions allowing for more regular cuts of silage.

Cuts were taken monthly from mid-April, with some fields harvested six times; D-values ranged from 70-75% and dry matter (DM) averaged 34% across all cuts.

Approximately 3,800t of clamp silage and 1,000t of bale silage has been produced this year.

Cows are zero-grazed in the spring and summer when conditions allow, with the bulk of this grass fed to late-lactation cows. Milking and dry cows are grazed when conditions permit, with youngstock also grazed.

Hugo Edwards says: “Every attempt is made to maximise and utilise grass in one way or another in often challenging conditions.”

How feed savings are made

Since the start of 2019 there has been an improvement in milk yield with cows in milk averaging between 33-34.5 litres a day up to the end of September.

The concentrate feed rate has gradually come down, from 0.45kg/litre in January to an average of 0.3kg/litre in the three months to the end of September. Meanwhile, milk produced from forage is up by 25%.

Farm consultant Richard Gibb, who worked with the Edwards on the Farming Connect project, says this has equated to feed savings totalling 3.1p/litre.

“The cost of concentrates a litre has reduced from 10.5p in January 2019 to an average of 7.4p in the three months to the end of September,’’ he reports.

“However cows have eaten more forage to replace the concentrates and this has added some cost back into the total feed cost/litre.’’

The cost of making clamp and big bale silage was less than £120/t DM – approximately half the cost of energy from the purchased feed in the system.

If the current feed rate can be maintained at 0.3kg/litre average, yield is on course to be 10,700 litres a cow by April 2020 from 3,210kg of concentrates a cow, with enough energy from forage to maintain the cow and produce 4,000 litres of milk.

Hugo admits multi-cut silage may not suit every farm – contractor costs are higher and good clamp management is important – but he says he had gained some real benefits from this approach.

“The Farming Connect project, so far, has shown financial and yield improvements from achieving more milk from forage and making the best use of home grown feeds,’’ he says.

“We are very pleased with the silage analysis and the performance of the cows has reflected its quality.’’