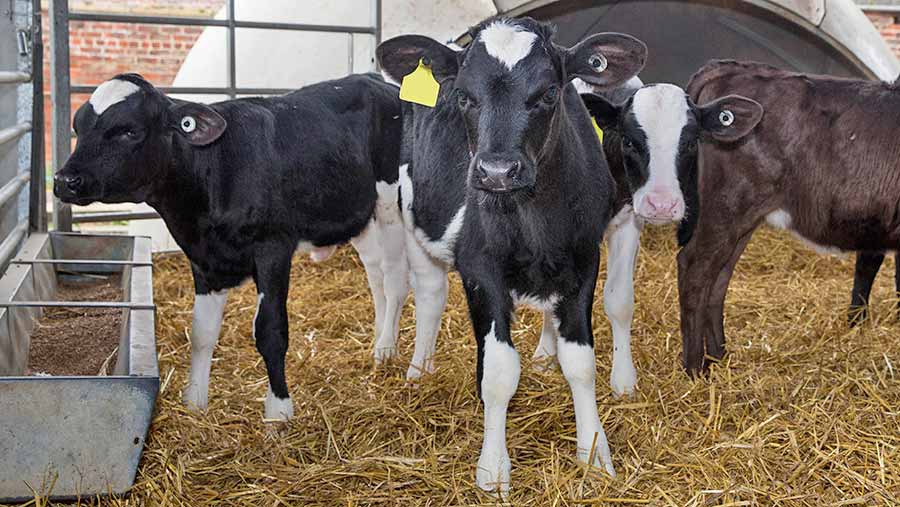 Farmers are being urged to audit the amount of copper being fed to dairy cattle after on-farm investigations found that stock is being endangered by feed products that commonly exceeded industry copper level guidelines.

Youngstock are increasingly identified as being at high risk from over-supplementation, even when fed at manufacturers recommended rates, warn experts.

See also: Dairy farmers could poison cows by feeding too much copper

And it is not uncommon for copper to exceed legal maximum permitted levels of 40mg/kg DM in some cases either, they add.

The duo carried out their own on-farm investigations following a spate of calf mortalities last year and found many off-the-shelf dairy and dry cow minerals and supplements led to total diet copper levels significantly higher than the industry guideline.

“This isn’t an isolated thing. Farmers are not doing anything off label and without realising they are feeding copper levels way in excess of guidelines,” says Mr Richards.

He says one farm was feeding close to the legal maximum before taking into account the fact that cows had also received copper boluses and mineralised parlour concentrate.

Background levels in feeds would take this well above the legal maximum and more than double the recommended maximum, explains Mr Richards.

“One specialist dry cow compound supplied above the legal maximum level of copper on its own, when fed as directed to pre-calving cows,” he added.

Furthermore, farmers reported that it was a challenge to source standard calf rearer products with sufficiently low levels of copper to meet their requirements when rations were re-formulated.

Mr Richards warns the issue is compounded when calves are fed straw because it contains low levels of antagonists – chemical elements known to reduce the availability of copper.

Why do many farmers feed too much copper?

Many farmers over-supply copper because they believe their farms have high levels of antagonists such as iron, molybdenum and sulphur. However, typically maize, straw and wholecrop contain lower levels of antagonists than grass silage and these can vary annually and even between silage cuts, says Mr Richards.

Mr Stevenson says the old adage “some is good so more must be better” does not apply to copper.

He warns farmers must stop basing their copper requirements on historical levels and should test forages regularly.

“With high levels of supplementation, copper toxicity is a far greater risk than copper deficiency.”

How to prevent copper toxicity

Mr Richards and Mr Stevenson are urging farmers to carry out a complete audit of the amount of copper being fed on farm in conjunction with feed advisors and farm vets.

In addition, he says liver biopsies from live animals are the best indication of copper stores and farmers should work with their vets to get biopsy results prior to planning rations.

“Sample animals that have been exposed to the highest levels of copper, such as high yielders in mid-late lactation, and use information from deadstock.”

Many people believe molybdenum and sulphur simply locks up copper and prevents its absorption. In fact, they combine in the rumen to form thiomolybdate.

The binding of copper to thiomolybdates in the rumen will detoxify the thiomolybdate, preventing its absorption into the animal.

Once in the animal, thiomolybdate will bind to copper engaged in the metabolic functions (enzymes) and thus reduce the activity of copper involved in physiological processes.

The thought that copper is locked up has led to the feeding of high concentrations of copper and copper sources, which allegedly bypass the rumen making the copper more available to the animal (and potentially less available to detoxify thiomolybdates in the rumen).

However, this can lead to the feeding of excessive amounts of copper and still allow thiomolybdate toxicity to occur within the animal.