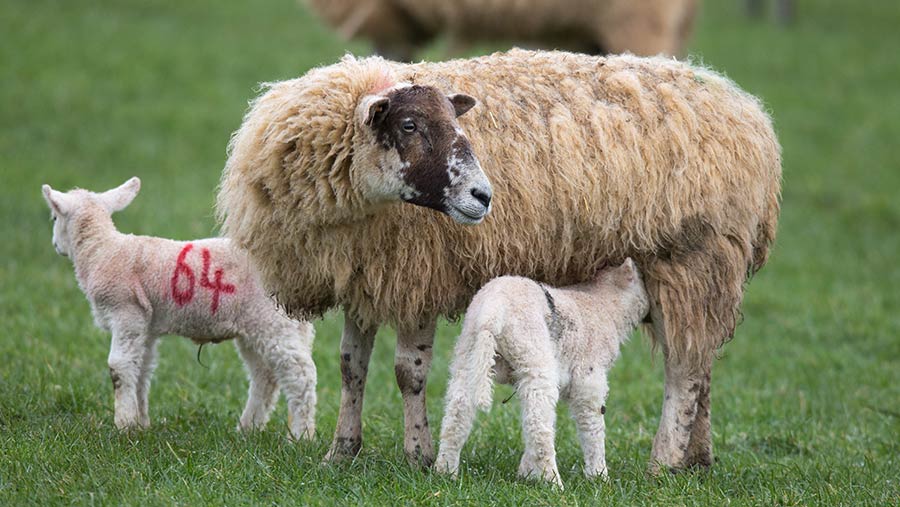 Ewes with low body protein levels are more likely to lose lambs between scanning and birth, according to a new study.

While ewe body condition and energy balance in late pregnancy were already known to influence lamb survival, the effect of protein status has been less well understood.

Now, though, research led by the University of Edinburgh has revealed that protein plays a vital role in newborn lamb survival.

Metabolic profiling carried out across a single flock showed good energy balances among all of the individual in-lamb ewes.

But the blood samples highlighted that long-term protein balance in half the ewes was variable.

After lambing, the results showed that ewes which had lost one or more lambs between scanning and tagging at 24 hours old had lower blood protein levels than those with surviving lambs.

But further work was necessary to determine whether this was due to concurrent disease such as liver fluke or poor dietary protein supply during pregnancy.

A joint statement by the three levy boards said the results highlighted the importance of ensuring ewes were fed to meet both their energy and protein requirements in late pregnancy.

It also demonstrated that any diseases which might affect protein status should be tackled.

“This project has highlighted the importance of ewe nutrition during the lead-up to lambing and the potential outcome of the lamb,” the statement said.

“In order to provide sufficient colostrum for their newborn lambs, ewes require a diet which meets their nutritional requirements in the final weeks before lambing.”

A second strand in the study looked at the use of antibiotics.

This area of the trial found that medicine records showed most beef and sheep farms were able to manage infectious disease and maintain production, without resorting to High Priority Critically Important antibiotics.

It also found that prophylactic oral antibiotic treatment at birth in a well-run flock did not improve lamb survival or performance.